Accessibility links
New Liturgy Reanimates Catholic Music When Catholics arrive at church for the beginning of Advent this weekend, they may find themselves stumbling over not only the words, but also the music. The Vatican has changed the English-speaking Mass to make it more faithful to the Latin. Some see that as a renaissance for composers and for the music publishing business. 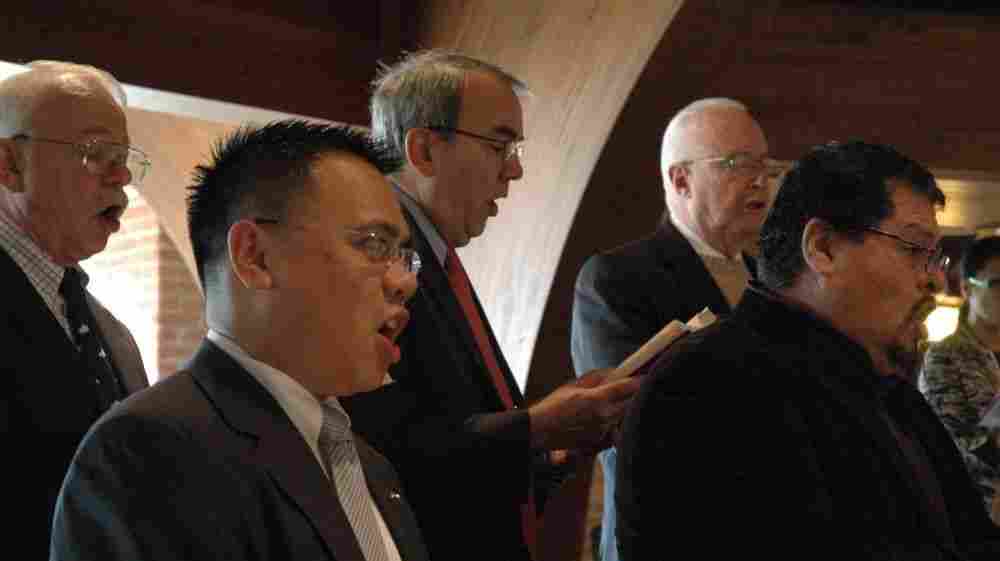 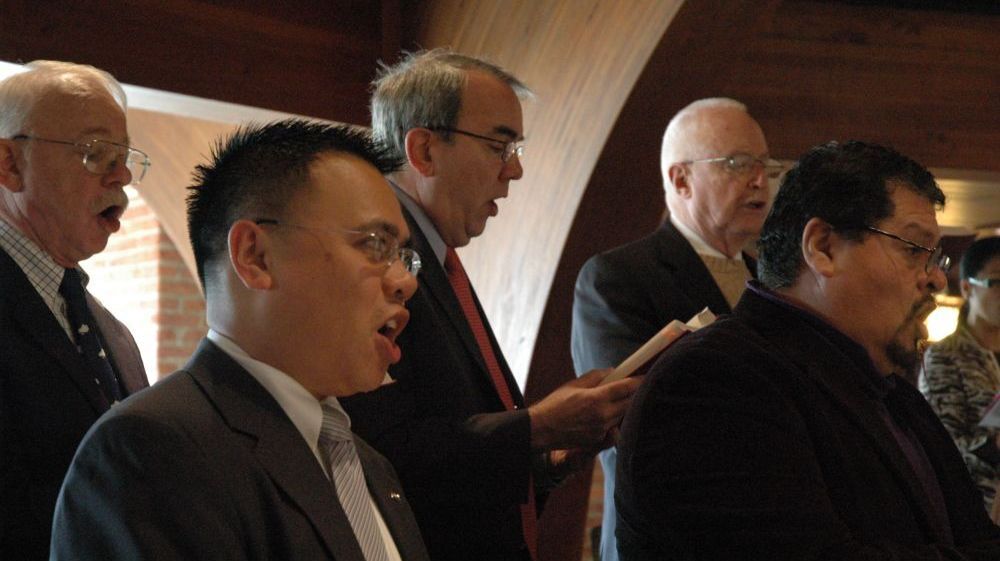 Peter Maher/Courtesy of the National Association of Pastoral Musicians

When Catholics arrive at church for the beginning of Advent this weekend, they may find themselves stumbling over not only the words, but also the music. The Vatican has changed the English-speaking Mass to make it more faithful to the Latin — and as a result, the sung portions of the Mass often don't work.

It's the most dramatic change in more than 40 years, and it has Mike McMahon working overtime with his choir.

The music director of St. Agnes Catholic Church in Arlington, Va., leads the singers through the Sanctus, or Holy Holy, tweaking until the new words and rhythms become second nature. The choir has been rehearsing for weeks, and McMahon says it's been an adjustment.

"Things that we're familiar with, that we know by heart, suddenly have a different sound to them," he says.

McMahon says that when the Vatican changed the words of the liturgy to adhere more closely to the Latin, the sung portions of the Mass suddenly had a different sentence structure and cadence.

Rocking The Boat Is Going Over Well

"I actually really like, in the Gloria, going back to: 'We praise you, we bless you, we glorify you,' " she says. "I think that's really beautiful — something that was missing in the translation before."

In fact, those words are in songs sung in Spanish, or French, or Italian — because all translations except for English are based word for word on the Latin Mass. This highlights what the Vatican sees as one of the flaws of the English Mass: It was translated very quickly after Vatican II, and it was made a little too conversational for the Vatican's taste. So it's being revised, to bring the English Mass back in line with Latin and other translations.

No doubt, it's a challenge for people to relearn the words and songs they've grown up with. But Marie and Jack Grace, both in their 80s, say people will adapt. After all, before Vatican II, they sang in Latin.

"Compared to after Vatican II, when we were singing English, that was traumatic," Marie Grace says.

"So this is not a big deal at all," Jack Grace adds.

The new liturgy also eliminates one of the most beloved and well-known parts of the Mass — "Christ has died, Christ has risen, Christ will come again" — because those words were not in the original Latin Mass.

"It's like a good habit," choir member Ben Robless says. "We go on automatic pilot when we sing this, because we've done it so many times and we enjoy it. But I look forward to new stuff, to the new music. It's challenging. It's good. Pray in a different way — maybe better, who knows?"

And The Presses Are Rolling

It's undoubtedly better for the companies that produce Catholic music — people like Alec Harris, president of GIA Publications, one of three major Catholic music publishers. GIA's printers turn out 7,000 hymnals an hour. These days, he says, they're running seven days a week, like everyone else at the company.

"Oh my gosh," he says. "Our staff has been working like crazy for the past two years, and we're still working hard to release new materials."

It's a welcome shift in fortunes. For three years, parishes had stopped ordering new hymnals, knowing the new missal, or liturgy, was in the works. That, coupled with the recession, meant that the manna from Rome came not a minute too soon.

In the past two years, GIA commissioned its composers to write 23 new Mass settings; some are revisions of old favorites, while many are entirely new works. They've recorded the new music, sold 150,000 new hymnals and doubled GIA's business since July.

"Our sales are exceeding what we did at the height of the economy," says Harris, who declines to give numbers because it's a family business. "So we're doing beautifully right now."

This moment is another sort of turning point, says Jeffrey Tucker, a music director at St. Michael's Parish in Auburn, Ala., and managing editor of the magazine Sacred Music. He says he's glad to see it.

"I think the time has passed. The experiment is ending now, in trying to sing pop tunes at Mass," he says. "This, what's called fun, bright, happy, silly — I think it's superficial music — doesn't really fit with a serious, substantive, theologically profound missal that has this language that is so solemn, and so inspired, and so prayerful."

Of course, a lot of people love the modern music. The new versions are selling well. But Tucker says he's been overwhelmed by the caliber of original music that's being written. He says it's as transcendent and mysterious as the Communion itself.

"We're headed towards a new kind of renaissance for Catholic music," he says. "And this is very, very good for the Catholic Church, because we want the best artists to be interested in what we're doing."

Whether Tucker's hopes come true — and traditional music and chant overtake the modern pop music — will play out over the next few years. In the meantime, the new words and music are arriving just in time for Christmas.