Accessibility links
Obama Backers Hope To Rekindle Enthusiasm In Iowa Iowa voters catapulted the young senator from Illinois to victory in the state's leadoff caucuses four years ago. The president's campaign, which is gearing up in the early states ahead of next year's election, is counting on activists to stick with him in 2012. 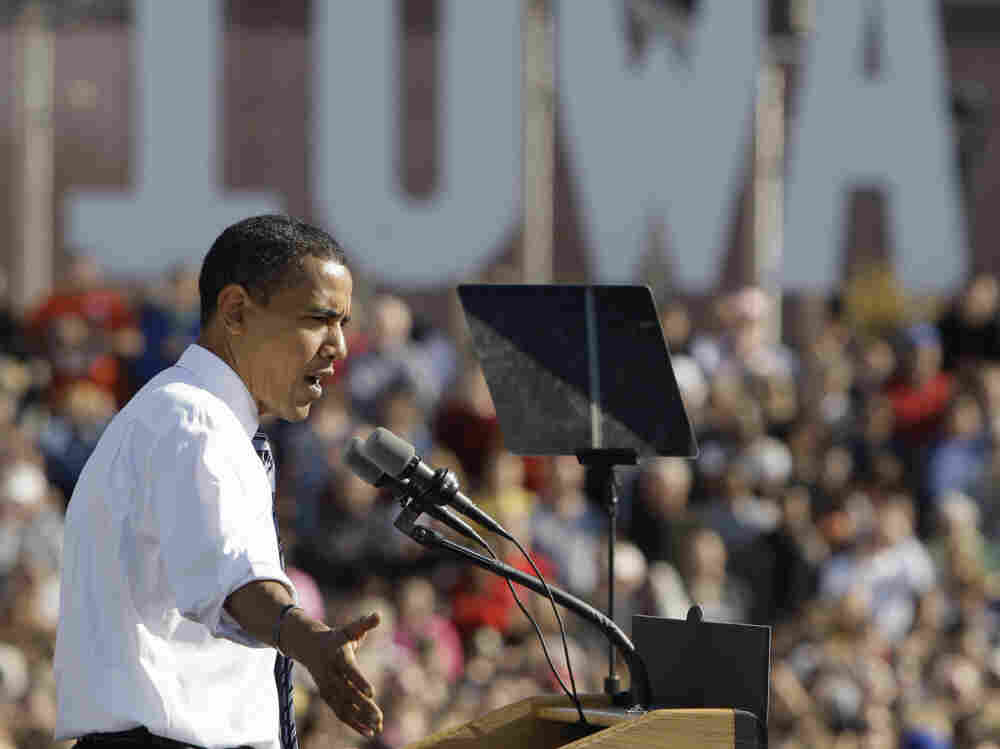 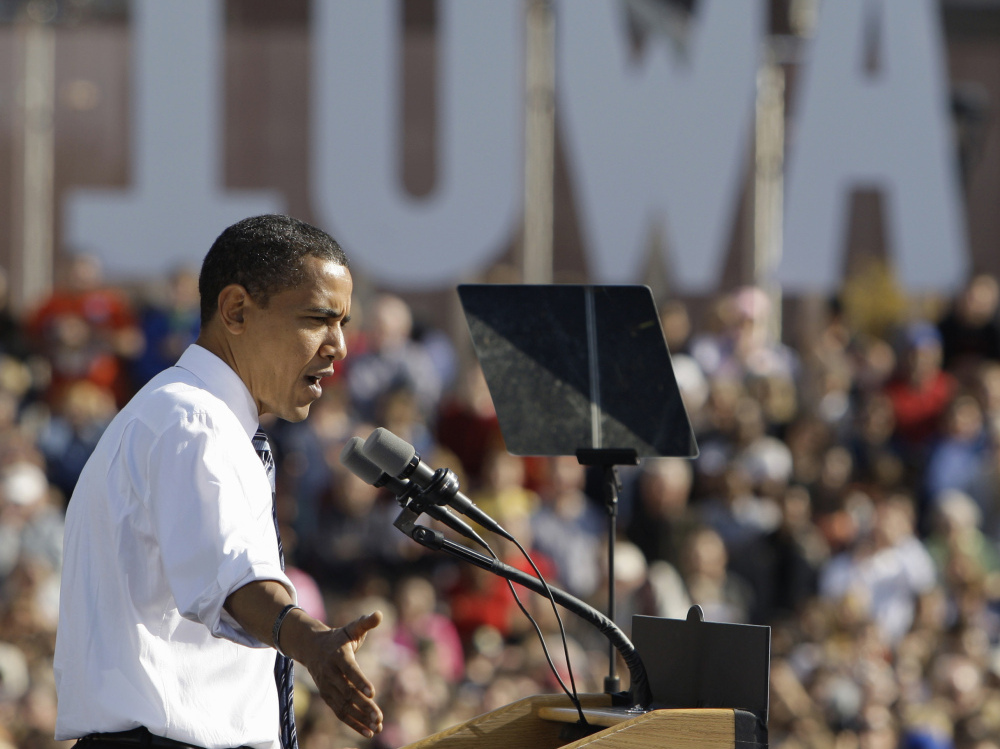 In October 2008, then-Democratic presidential candidate Sen. Barack Obama spoke at a rally in Des Moines, Iowa. Now, even without a Democratic challenger, President Obama plans aggressive roles in states with early presidential primaries, especially in Iowa and other battleground states.

President Obama's campaign is gearing up in the early states ahead of the 2012 election. In Iowa, Obama supporters are hoping to recapture at least some of the enthusiasm that catapulted a young senator from Illinois to victory in the state's leadoff caucuses four years ago.

On a chilly evening, a handful of volunteers are gathering around a coffee table in a suburban Des Moines living room to strategize about how to talk to their fellow voters. By and large, this is not the group of college students that turned out to support Barack Obama four years ago. The host, Saundra Ragona, a 69-year-old retired computer systems analyst, says her enthusiasm for the president dates back to her own youth.

"During the '60s and '70s, I was one of those people who went around screaming about civil liberties and civil rights," she said. "So when it came to be that an African-American could be president, I felt that my friends at that time had really accomplished something."

Now, Ragona calls Obama her "hero" and says she's determined to see him elected to another term. She says she's been committed since she first met him on the campaign trail in Des Moines four years ago.

"I was just following him everywhere. Once I shook his hand, I was his for life," she says laughing.

The Obama campaign is counting on activists like Ragona to stick with him in 2012. The campaign's Iowa website opens with the reminder: "Four years ago, Iowa started this movement," and adds, "Today, we can keep it moving forward."

Tom Reynolds, regional media director for the Obama campaign based in Chicago, calls the 2008 Iowa caucuses a "historic event" for the president.

"We saw massive turnout, changed the calculus, brought in new voters, and it was the beginning of a victory march for the president," he says.

The campaign is hoping to carry on that march, lining up volunteers across Iowa and the nation.

So far, the campaign has eight official offices in Iowa. Reynolds says they have already made more than 200,000 phone calls.

"Organizationally, Obama is ahead of where we were in '96, but in terms of his stand with the voters, he's not in as strong of a position as where Clinton was in '96," says Jerry Crawford, who was President Clinton's state campaign director in 1996, the last time a Democratic incumbent was running for re-election.

Ragona says she keeps an eye out for former Obama supporters who may have fallen away — folks like Lou Ann Rounds, 66, a former teacher who now works as a nanny.

"I've always been a Democrat, but I want to find out what Obama stands for now," Rounds says. "We know what he said he stands for. Now I want to know what he's done on issues that are important to me."

Rounds says she voted for Obama in 2008, but isn't sure what she'll do next year. Ragona invited Rounds to drop by and talk with her neighbors about the president's positions.

Reynolds, of the Obama campaign, says firming up support is what matters at this stage.

"This isn't about turnout for us right now; it's an organizing opportunity that we're going to capitalize and use for the general election," he says.

That's the way you begin, says Crawford, the former Clinton campaign director. He estimates that a well-organized ground campaign could make a difference of 2 to 5 percentage points on Election Day.