Accessibility links
War By Remote Control: Drones Make It Easy This year, the Air Force says it will recruit more pilots to fly unmanned aircraft than manned fighters and bombers combined. Here's what that shift means for the military, for potential pilots, and the way we think — or don't think — about war. 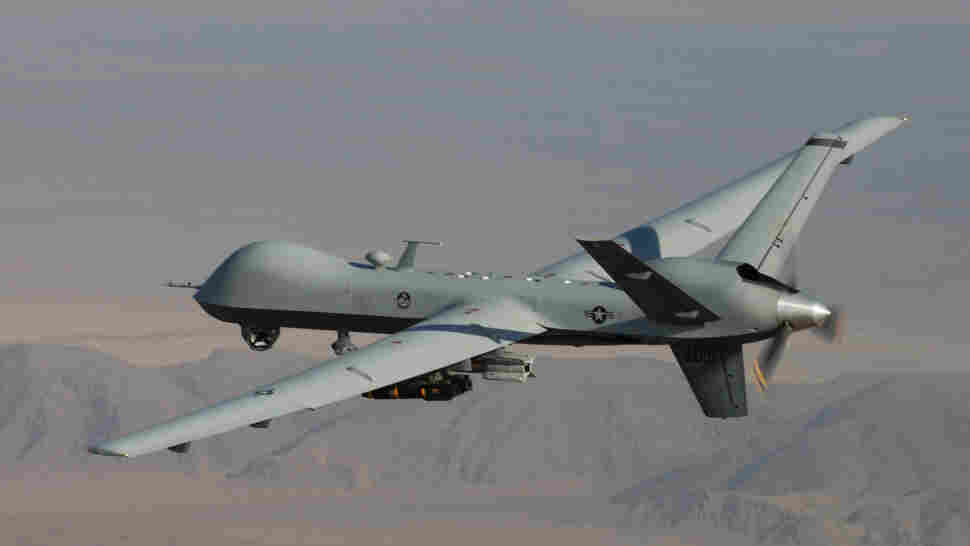 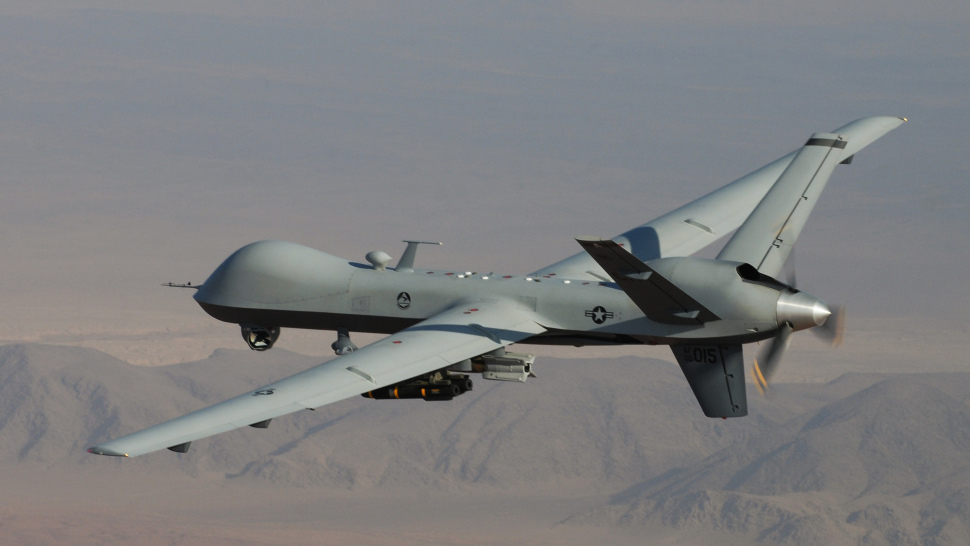 The Predator drones flying over Afghanistan and Pakistan are variants of this MQ-9 Reaper.

From his spot beneath the famous Wright Military Flyer in the Smithsonian National Air and Space Museum, Peter Singer is reminded of a modern military drone.

"The story of manned airplanes is a great parallel to what's happening now with unmanned airplanes," he tells weekends on All Things Considered guest host Rachel Martin.

Singer, a technological warfare expert and author of the book Wired for War, has had drones on his mind a lot lately. The Department of Defense is under pressure to cut close to a trillion dollars from its budget over the next 10 years, so there's a lot of talk around the Pentagon about what can go and what can't.

Most defense officials agree that what can't be cut is remote aerial technology. Drones have taken center stage in the U.S. wars in Iraq and Afghanistan, as well as the counterterrorism fight in Pakistan. The ability to fight wars without risking U.S. lives is raising questions about the nature of combat.

Skepticism From The Wright Brothers On

The Wright Military Flyer, Singer says, is a reminder of just how far drone technology has come.

In 1903, he says, The New York Times printed an article under the headline "Flying Machines Which Do Not Fly" that argued it would take millions of engineers and mechanics tens of thousands of years to build an actual flying machine. The idea, Singer says, was considered science fiction.

But on the very day that article was printed, Singer says, "two brothers in Dayton, Ohio, start to assemble the first real flying machine in their bicycle shop."

It wasn't long until the military opened bids for what were then called "heavier-than-air" flying machines. The Wrights signed a contract, and the Military Flyer was born.

"It's just like any other technology — whether it's what happened with the horseless carriage or what happened with the computer," Singer says. "Starts out as imagination, and then it gets crossed with innovation, profit seeking and, most importantly, that horrible human need to figure out how to destroy one another."

More than 100 years later, aerospace pioneers are still convincing the rest of us their work isn't the stuff of science fiction.

That's literally the tagline of a recent Air Force recruiting ad featuring drone technology: "It's Not Science Fiction. It's What We Do Every Day." The ad shows a robotic aircraft scanning a desert landscape with a camera that looks like a bright red eye, alerting troops on the ground of a nearby sniper.

Not far from the Wright exhibit at the Air and Space Museum, you can find an exhibit featuring five different drones — the Air Force prefers the term "remotely piloted aircraft. Among the aircraft is an MQ-1 Predator, similar to the drone from the Air Force ad. These drones have special meaning for Singer.

"They're actually just like that Wright brothers Flyer," Singer says. "They're the first generation of all this."

Singer says not a single Western aerospace company has a manned combat aircraft in research and development. The MQ-1 Predator is the military's main workhorse; on Sept. 11, 2001, the Air Force had one.

Poss says the Air Force now recruits more pilots for unmanned aircraft than fighter and bomber pilots combined. A lot of the skills pilots need are the same — spatial awareness, quick critical thinking skills — but unlike pilots for manned aircraft, remote pilots don't need perfect vision. They don't need to worry about getting airsick. And combat can bring different strains, too.

"Unlike a person that deploys to combat, our remotely piloted aircraft force never leave combat," Poss says. Also, "you do leave your ground control station and drive home and you have to mow the lawn."

One Predator pilot, he says, has been stationed at Creech Air Force Base in Nevada, flying surveillance over the same area of southwest Asia for nine years.

"The overwhelming advantage we get," Poss says, "is that if you want to go and talk to a world expert on Iraq or Afghanistan, maybe you don't need to go to Iraq or Afghanistan. Maybe you need to talk to that young captain down at Creech, because they've been staring at that ground for the past nine years."

A War Over There

The extreme distance between Nevada and Afghanistan keeps a remote pilot out of harm's way, but Singer argues it also introduces a host of complications about how we define war.

He points out that Obama skirted congressional authorization for military action in Libya, arguing that air support for the European effort did not risk U.S. forces. Yet, he says, the U.S. carried out 146 airstrikes in Libya — including a final strike that may have contributed to the capture of Col. Moammar Gadhafi.

The U.S. has also carried out hundreds of airstrikes over Pakistan using drones, raising questions about the nature of aerial combat. The strikes have led to civilian casualties and inflamed tensions between the two countries.

That tension escalated on Saturday as Pakistani officials accused NATO of killing more than 20 soldiers at an outpost near the Afghan border. In response, Islamabad shut down one of the key supply routes for U.S. troops into Afghanistan and demanded that the U.S. close an air base used by the CIA for drone strikes.

"Engaging in combat and people being at risk have always been together until now," Singer says. "The technology allows you to disentangle them, and now a new age of war has started."

The big question is how much more automated war will become. Singer says there are dozens of other countries at different stages of developing their own drone technology. Will there be a time when air-to-air combat is fully automated?

"I can definitely see some of the more mundane aspects of flight being autonomous," Poss says. That could mean landing and taking off, aerial refueling, flying to and from a certain target.