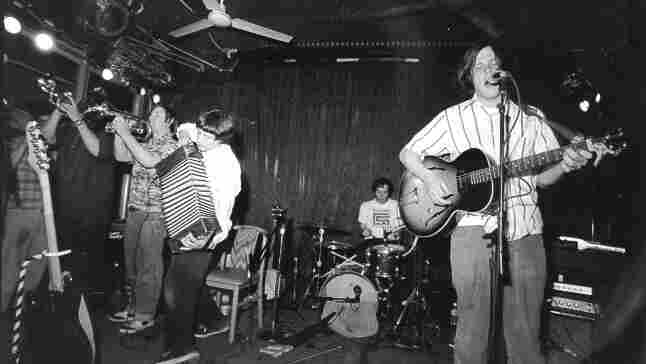 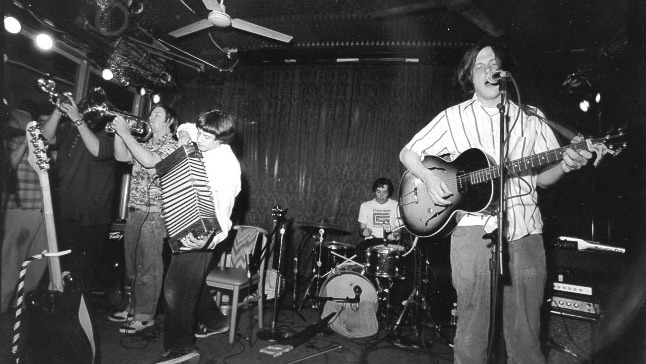 Neutral Milk Hotel performs at Spaceland in Los Angeles in 1998.

It's been nearly 15 years since Neutral Milk Hotel released its iconic final album, In the Aeroplane Over the Sea, but the band and leader Jeff Mangum have never fallen off the radar.

With his bold, tinny voice and honest yet surreal lyrics, Mangum and his bandmates re-imagined how independent music could sound. Now that he's performing for the first time in more than a decade, Mangum is also rewriting the rules for how to tour as a musician.

To really understand the power that Mangum's music holds over its most devout fans, you have to start at the Paragon Carousel in the seaside village of Hull, Mass.

In 2009, the Paragon was competing for a grant with other historic attractions in New England. To win, it needed to get the most online votes. The carousel's hand-carved wooden horses were neck-and-neck with their competitors, until they got an unlikely endorsement.

Mangum and bandmate Julian Koster wrote an email asking their fans to vote. With Neutral Milk Hotel's stamp of approval, the carousel won. Music fans from all over the world voted for a merry-go-round in a town they would likely never visit — even though the band hasn't released a record since 1997.

In the Aeroplane Over the Sea earned Neutral Milk Hotel an almost fanatical following. In the same year as the Paragon victory, Amanda Palmer of Dresden Dolls directed a high-school musical based on the album. In the Aeroplane has even inspired a fan-made video game.

But the record would be Neutral Milk Hotel's last. Just when the band started gaining acclaim in the late 1990s, it dissolved. Mangum vanished, releasing only one live record, one song on a compilation CD and an album of field recordings from a Bulgarian folk festival. He's performed only a handful of shows, many of them unannounced, like a recent performance for Occupy Wall Street protesters in New York. And he's refused all interview requests for years.

Now, Mangum is on his first announced tour in more than a decade — and if you ask Joe Kelly, who was waiting in line to see Mangum play in Baltimore, it's almost like the second coming.

"I guess this is equivalent to hearing that, like, John Lennon has been resurrected and is performing a concert in Baltimore," Kelly said.

The person in charge of coping with Baltimore's demand to see one of Mangum's live shows is music promoter Todd Lesser.

"In previous years, they were very — almost guerrilla performances," Lesser says. "You'd go to see one band, and lo and behold, Jeff Mangum would get on stage and start playing, as well."

Lesser knew that tickets would go quickly when they went on sale this past June, but he says the speed surprised even him — the thousand or so tickets for Mangum's two Baltimore dates sold out in 18 minutes. Makes sense: reclusive artist, limited tour dates, high demand. Of course, some people were bound to buy tickets just to flip them for exorbitant amounts of money. Rumor had it that tickets for previous shows on the tour had re-sold for more than 10 times their face value, up to $300 apiece.

"Easily," Lesser says. "And I've also heard of the extreme cases, where people are paying into the four figures for tickets."

But there would be no ticket scalping on Lesser's watch. Working with Mangum's booking agency, Lesser instituted a policy that IDs would be checked at the door, and that they had to match the name of the purchaser. If you bought two — the maximum you could buy — you had to give the name of your guest.

"And people did comment," Lesser says. " 'How am I supposed to know who I'm going to ask on a date to see a show three months from now?' "

"These tickets are like a gift, honestly. I feel like they're a present from Jeff Mangum, almost, just because they're clearly under-costed, and they did this whole system because they're under-costed," he says. "And you want it to be for the actual fans, so I think it's a great system."

There were a few hiccups, such as when Mary Schwartz, née Rackovan, was held up at the door.

"I recently got married, so my name doesn't match," she said. "They put my married name in on my license. I can have my husband bring my marriage license."

Schwartz did make it in to the show, but NPR's recording equipment didn't. Per Mangum's request, there was no audio, video or even photos of his performance.

The venue, an old church converted into a community event space, was aglow with Christmas lights. When Mangum took the stage, an intense quiet fell over the crowd. After playing a few songs, he asked if there was anything people wanted to know. Voices from the crowd asked him if he was happy, why he's touring, whether he still makes music.

"We missed you," someone called. Mangum didn't miss a beat, replying, "Well, we're together now, right?"

Mangum was cordial through this whole exchange, but there was heavy tension in the air, as if the wrong question could spur him to get up and leave. He didn't, and before long, the concert had become a giant singalong — but in a way that wasn't corny or weird. By the end, many audience members were in tears.

"It was perfect," Leonard said. "The crowd made it even more special."

All of the shows on Mangum's tour have long been sold out, but he's announced on his website that he'll add more dates in the U.S. and abroad. And he'll self-release a vinyl-only box set of Neutral Milk Hotel's music, featuring previously unreleased songs — one more present for those who've been listening to hear where he's been.