Accessibility links
Beyond Fighting Crime, FBI Reaches Out When FBI agents arrive at the scene of a shooting or a terrorist attack, a representative from the FBI's Office for Victim Assistance is often there to help people who are affected. The FBI offers practical help as well as referrals for counseling. 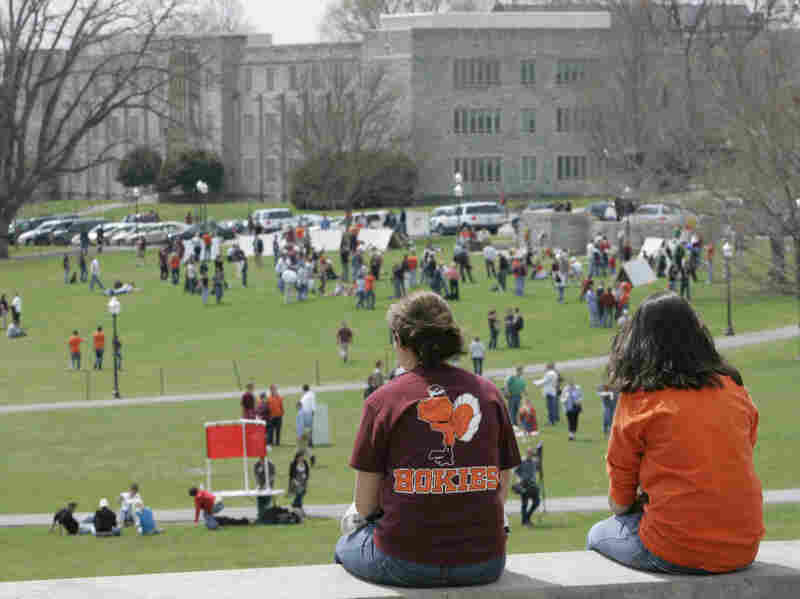 Students sit at the Virginia Tech campus on April 18, 2007, two days after a student killed 32 people and himself. FBI victim specialists span out to help in the wake of crimes like the Virginia Tech massacre. Mary Altaffer/AP hide caption 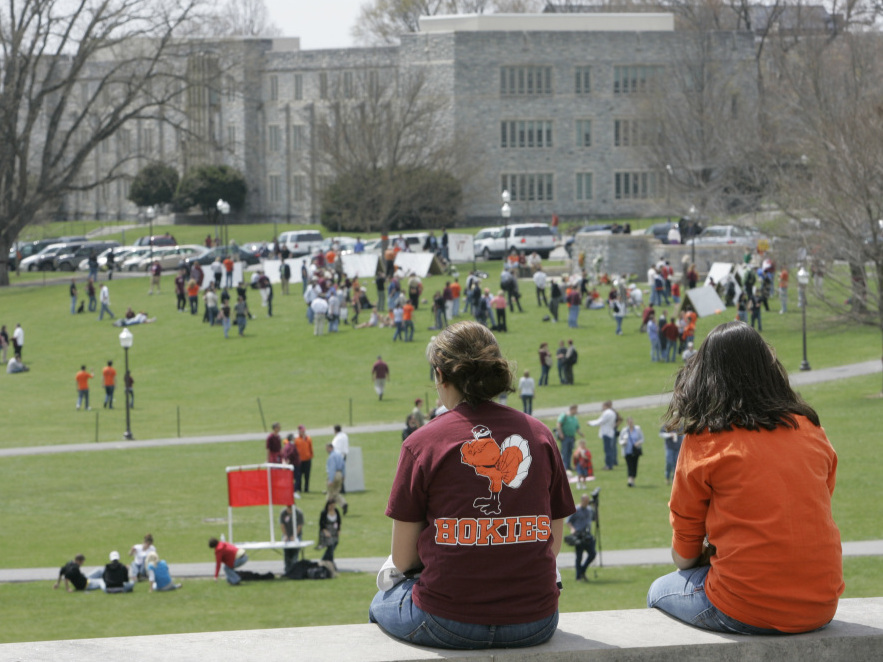 Students sit at the Virginia Tech campus on April 18, 2007, two days after a student killed 32 people and himself. FBI victim specialists span out to help in the wake of crimes like the Virginia Tech massacre.

When FBI agents arrive at the scene of a shooting or a terrorist attack, there's often someone else standing in the background. It's a representative from the FBI's Office for Victim Assistance, there to help people suffering in the aftermath of a disaster.

The planning for those unfortunate days starts here, in a windowless conference room in the J. Edgar Hoover FBI building, where seven serious-looking people are sitting around a table.

They're talking about how to pick volunteers to serve on five elite teams of victim specialists they deploy when something really bad happens: what they call a mass casualty event. That means a bombing, a massacre or a terrorist attack.

Dr. Steve Porter is a clinical neuropsychologist who used to work with special forces in the military.

"It's a very demanding process," Porter says of the victim-assistance rapid-deployment teams. "These people who volunteer to be on this have to be able to leave in a moment's notice, almost. ... They have to be on call 24/7. They never know when they're going to get called."

They need to be able to help with basic needs, Porter says, such as safety, food, shelter and clothing.

In cases they know about in advance, such as raids on brothels where young women are trafficked, FBI social workers say they plan ahead: buying T-shirts, sweat pants and flip-flops for women inside who might need them.

Ultimately, a crime is against a person and so if you're not addressing a victim's need, you're sort of not addressing what the criminal justice system should be doing.

"There are so many things we can't do for them — we can't alleviate their loss — but we do try to provide for those practical needs and a lot of that starts with information," says Kathryn Turman, who created the victim-assistance office at the FBI 10 years ago this December.

Sometimes that means a little something more. In the early days, not long after Turman started the unit at the FBI, she reached out to a woman whose husband had been killed in a bombing in Iraq.

"I said, 'I wanted to say how sorry we are about your husband's murder,'" Turman says. "And she said, 'You're the first person who's used that word.' And that's what it was: It was a murder."

Turman and the FBI office she leads represent a pioneering philosophy, says Mai Fernandez, who directs the National Center for Victims of Crime, a nonprofit advocacy group.

"Ultimately, a crime is against a person and so if you're not addressing a victim's need, you're sort of not addressing what the criminal justice system should be doing," Fernandez says.

Part of what Turman does to address those needs is hire people from lots of different work backgrounds, not only social workers and military psychologists who work at top facilities for returning veterans such as Walter Reed Army Medical Center. Also on board are people like Kyle Scherrer, a former deputy coroner in California who led traumatic death investigations in the state.

These days, Scherrer focuses on terrorism cases where Americans are killed overseas. He helps coordinate autopsies and makes sure remains are brought back to loved ones in the United States.

Because of advances in technology, he and the victim specialists whom he manages can work with families to figure out if any cherished belongings may have survived the incident — and which of them can be cleaned and sent back home.

The FBI victim specialists are able to span out anytime there's a federal crime or in special situations such as the Virginia Tech massacre or the rampage at the military base in Fort Hood, Texas, where local authorities have asked for help.

Shawn Henry, executive assistant director at the FBI, oversees the FBI's Criminal, Cyber, Response, and Services Branch. As a member of the FBI leadership, he's seen the work of victim specialists up close.

"Protecting victims is one of the key components of what we do as an organization," Henry says. "I call it the three Cs: the ability to communicate, the ability to bring comfort and the ability to instill confidence in the process."

For her part, Turman says she started out wanting to help children for — it turns out — a very personal reason.

"When I was growing up I had two good friends in junior high, very good friends. The three of us were sort of like the three musketeers," Turman recalls.

Then one weekend, when they had planned a slumber party, one of the girls didn't show up. Her behavior started changing and she broke away from the group.

Turman later found out the girl had been sexually abused by her father that weekend. The girl ran away to New Orleans and Turman lost touch.

"I got a card, a birthday card from her. Our birthdays were two days apart. And I got a 16th birthday card from her. And then I found out about six months later that she had killed herself," Turman says. "A very bright girl, very bright, very promising. And she had killed herself on her 16th birthday. She sent me a card for mine."

Sometimes, Turman says, people don't understand their path until they look back.

She says it's the same thing in her work with victims of crime at the FBI: Some lives are destroyed, but some people are determined to make something good come out of tragedy.