Accessibility links
New Hampshire Voters Take Another Look At Ron Paul The Texas congressman drew less than 8 percent of the vote in the state in 2008. But things could be significantly different this time as Paul reaches into new corners of the electorate: He's adding independents and registered Republicans to his base of young voters and hard-core libertarians. 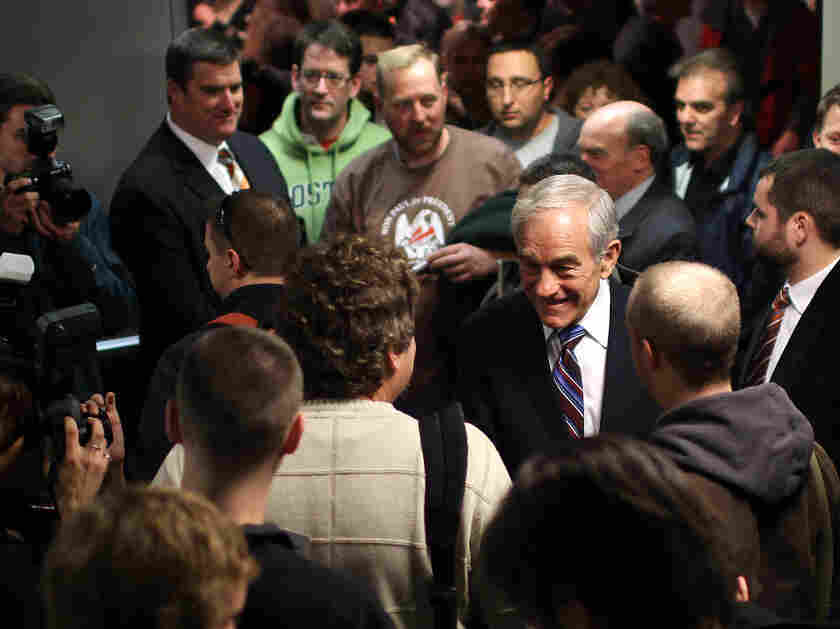 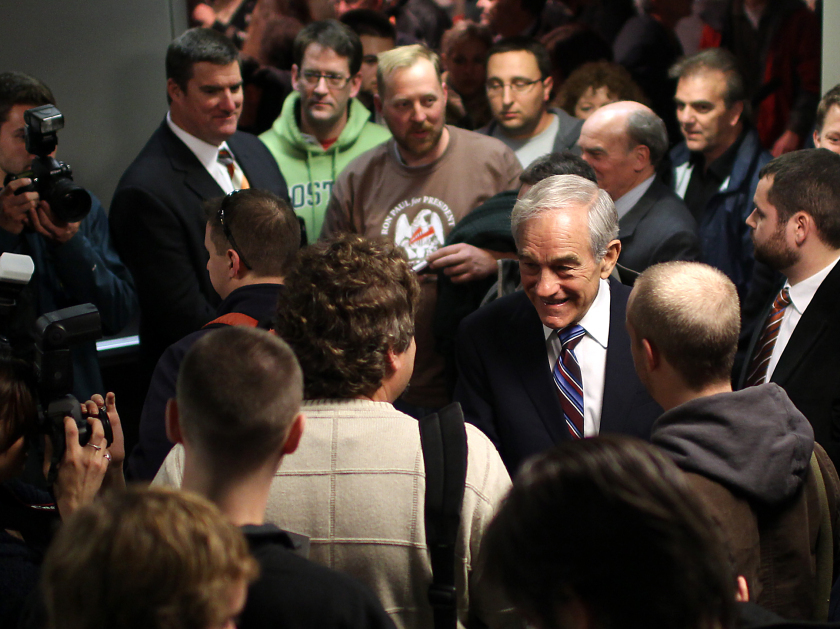 Republican presidential candidate Rep. Ron Paul of Texas is surrounded by supporters after speaking at a town hall meeting in Keene, N.H., on Monday.

In this presidential cycle, as in the last, there is no question which Republican candidate has the most ardent supporters: Ron Paul, the 76-year-old Texas congressman whose brand of libertarianism often puts him at odds with all of his rivals. But with less than seven weeks to go for the nation's first primary, there are signs that Paul could surprise people.

Former Massachusetts Gov. Mitt Romney is sitting pretty in New Hampshire, where he has been the front-runner all year, so whoever comes in second in the Granite State isn't doing too shabbily.

Smith's numbers last week show Paul in third with 12 percent, up from just a month ago. Other alternatives to Romney have risen to double digits only to fall back again, but Smith says Paul has some key advantages.

"He's got more money than other candidates, and he seems to have a more committed young following," he said. "Those young voters [are] always important on the campaign trail because they essentially will work for free and they're very enthusiastic about Paul."

Last week at Keene State College, Paul was clearly finding his campaign's sweet spot. More than 300 people packed at town hall meeting, many of them students. Paul launched his remarks with his signature call to return the dollar to the gold standard. He then talked of his plan to bring home American troops from across the globe.

"I don't believe we have the right or the authority to tell other people what to do," he said. "I believe we should be dealing with our own problems at home and improving our own conditions here."

Paul's base of young voters and hard-core libertarians leads some handicappers to pigeonhole him and dismiss his chances — and with some historic justification. In the 2008 New Hampshire primary, he drew less than 8 percent of the vote. But things could be significantly different this time as Paul reaches out into new corners of the electorate.

His next stop after Keene was a house party in the affluent town of Windham on the border with Massachusetts. This was no humble living-room affair. The host hired bartenders to staff not one but two built-in bars. The appetizer table offered rabbit pate.

Four years ago, Steve Airocci, who teaches social studies, voted for Obama and had no interest in Paul. Now, he's interested. He says he senses the established order has driven the country down to rock bottom.

"There's nowhere else to go," he said. "We have to do something drastic. We have to make some significant changes in government and primarily on the financial side."

Airocci is a registered independent, a fertile group for Paul in the past. This year, though, some registered Republicans are also giving Paul a closer look. Many voters who like Paul say they believe he is the only candidate who truly means what he says.

Former state Republican Party Chairman Fergus Cullen says another reason voters might have good feelings about Paul is the way he has side-stepped the normal campaign rough and tumble.

"He's unlikely to get attacked by the other opponents because no one sees it in their interest to go after him," he said. "So they're going to continue to just hear the positive and not the negative."

Cullen says events have made Paul's ideas about foreign entanglements and rethinking government more plausible. But his gut tells him most Republican primary voters are still not ready to go as far as Paul would like.

That's probably true for the race for first place. But in the race for second, Paul might be the one to watch in the home stretch.