Accessibility links
Sexual Violence Marks Latest Egyptian Protests Despite the chanting and the plastic tents, Tahrir Square now is a different place than it was when protestors overthrew the Mubarak regime. This latest phase of Egypt's revolution has been much more violent — and much of that violence has targeted women. 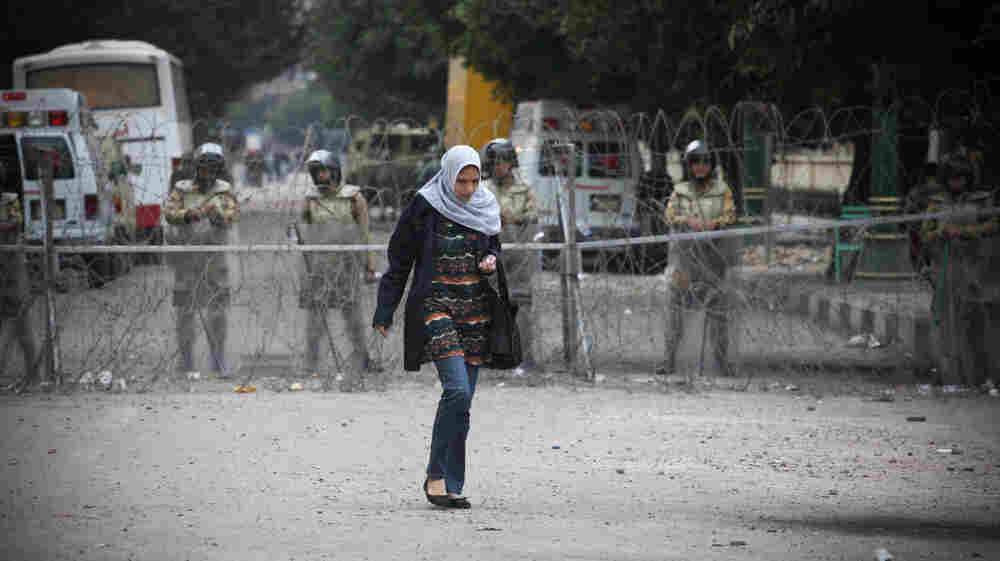 A woman walks past Egyptian military near Tahrir Square in Cairo, Egypt, on Sunday. Protesters have clashed with security forces in the days leading up to Monday's parliamentary elections, and women are being targeted. Manu Brabo/AP hide caption 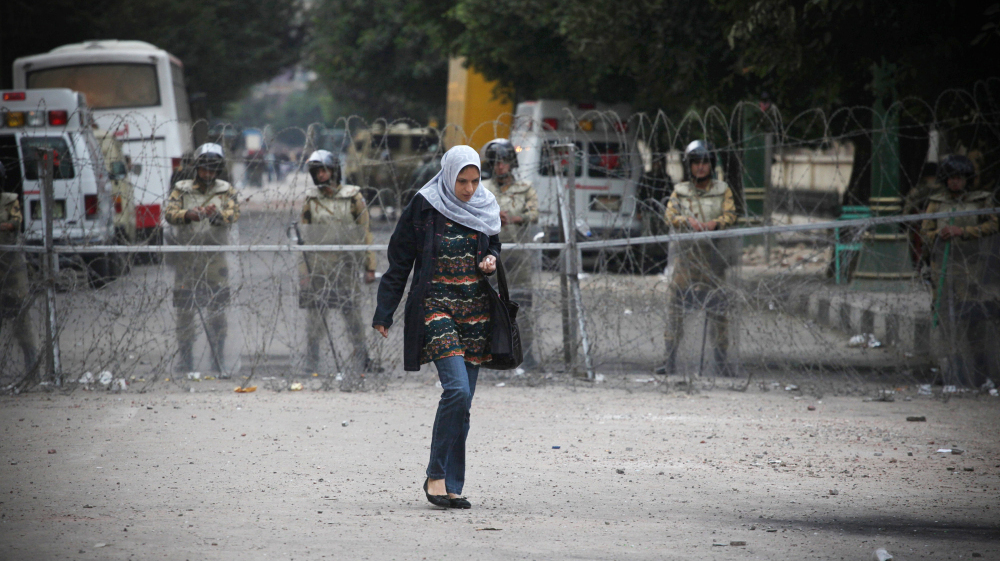 A woman walks past Egyptian military near Tahrir Square in Cairo, Egypt, on Sunday. Protesters have clashed with security forces in the days leading up to Monday's parliamentary elections, and women are being targeted.

Despite the chanting and the plastic tents, Tahrir Square now is a different place than it was during what is known in Egypt as the "18 Days," back in January and February when protestors overthrew the Mubarak regime.

In Cairo, protestors have called for another massive demonstration in advance of Monday's parliamentary elections. There are fears of renewed violence come Election Day; one man was killed on Saturday during clashes with Egyptian security services.

This latest phase of Egypt's revolution has been a lot more violent, protestors say. In just nine days, at least 40 people have been killed and 2,000 more wounded in clashes with security forces. And, as the atmosphere changes, paranoia and sexual violence are on the rise.

"There's far more pain here," says Mohammed el-Batagy, a professor at Cairo University. He's been participating in the demonstrations against military rule. "The square has witnessed orders of magnitude more violence than it had during the 18 days. There is fear, and then there is also infiltrators. They come in to just ruin the whole sit-in."

He says there is an atmosphere of suspicion toward outsiders this time around, with reason: There are agitators inside the square that el-Batagy claims were sent by the ruling junta.

"Yesterday, like a few were caught in Tahrir," he says. "And they admitted that they were actually being paid."

Women, in particular, are bearing the brunt of the changing dynamics. CBS correspondent Lara Logan was the victim of a gang sexual assault on the day that former Egyptian leader Hosni Mubarak fell. Most women who stayed in the square during the 18 days say that sexual violence was rare during that period. Not any more.

"Many of my female friends have been groped or touched or experienced sexual violence in various ways and have hit people, says Mona el-Tahawy, a well known Egyptian journalist and activist.

She was sexually harassed repeatedly by fellow male protestors in the square over the past week, but says her worst sexual assault came at the hands of the Egyptian security services.

Last Wednesday she was caught on the front lines of running street battles with the police. Taking cover, she suddenly found herself alone. 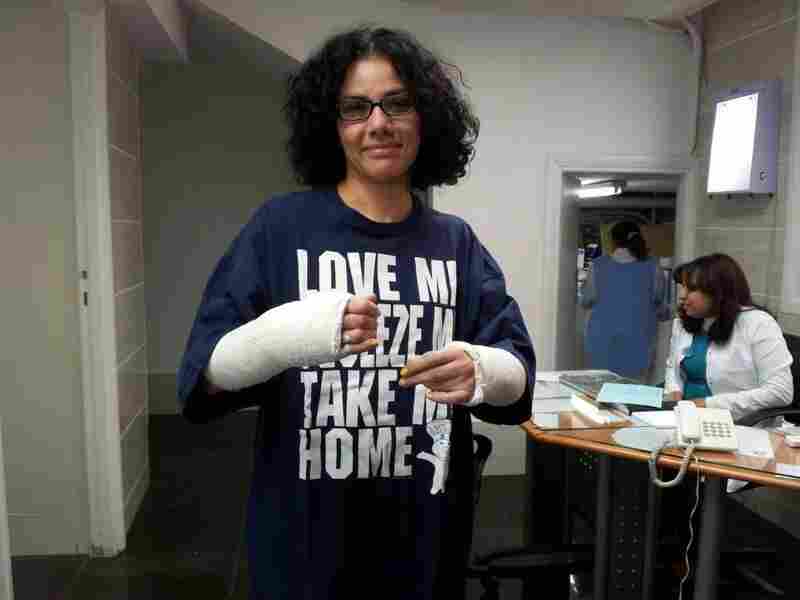 Egyptian journalist Mona el-Tahawy tweeted this picture of herself on Thursday after she was released from police custody. Tahawy says she was beaten and sexually assaulted by riot police last week. AFP/Getty Images hide caption 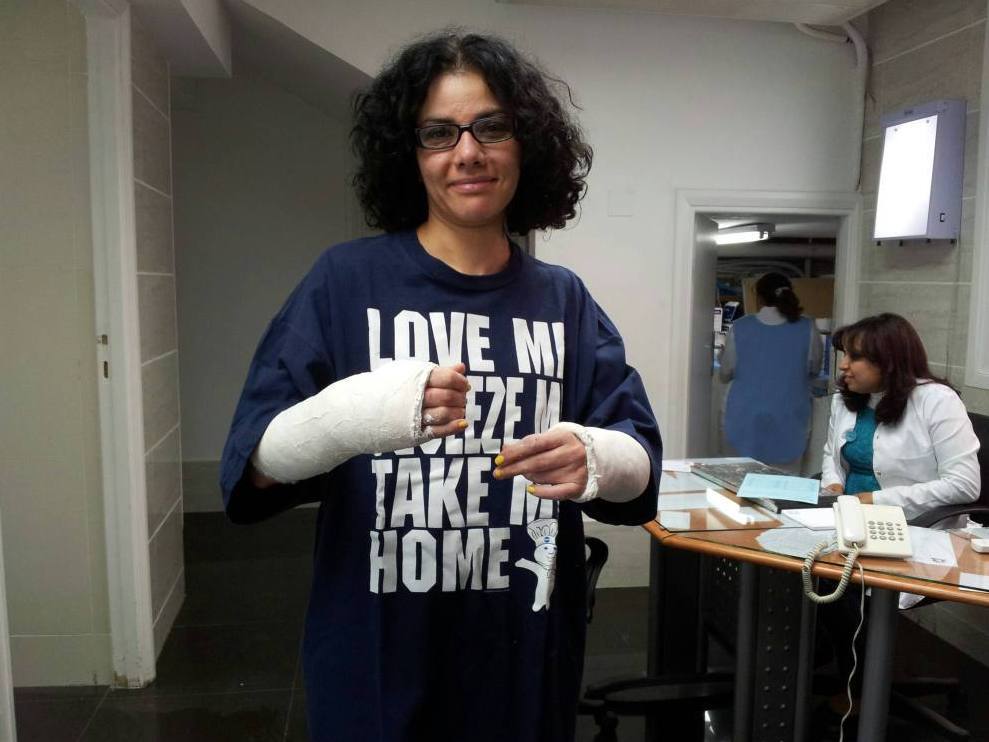 Egyptian journalist Mona el-Tahawy tweeted this picture of herself on Thursday after she was released from police custody. Tahawy says she was beaten and sexually assaulted by riot police last week.

"I was basically left in this abandoned workshop cornered by four or five riot police," she says. "They just started beating me with their sticks and that's how I broke my left arm and broke my right hand. And then they dragged me into the no man's land. And that's where they sexually assaulted me."

She was at their mercy, she says.

"Hands all over my breasts, hands in between my legs, hands going into my trousers as they were beating me," she says. "It was incredibly traumatic and very frightening, and at one point I fell on the floor and was terrified and thought, 'If I don't get up, I'm either going to die or they are going to rape me.'"

"All the time they were calling me a whore and dragging me by my hair," she says. "The groping and the assault did not stop until someone from the army said, 'Take her away.'"

She was put in a holding area, and after almost a full day without medical care, she was let go.

More Than A Political Fight

El-Tahawy says being sexually harassed by both protestors and police around the square underscores how much needs to change in Egypt.

"We are also fighting what I call the 'fourth enemy' now," el-Tahawy says. "It's not just counter-revolution; it's not just tear gas; it's not just police brutality – it's sexual violence."

"My obsession now with the revolution is we are experiencing a political revolution in Egypt, but we need a cultural and social revolution," she says. And Tahrir Square is at the center of it.

And that's why, she says, the changing atmosphere in Tahrir Square is so worrying.