Accessibility links
Found: Very First, Or At Least Very Early, Music Video A group called The Speek thinks they have found the first music video ever recorded. Host Audie Cornish has the story.

A group called The Speek thinks they have found the first music video ever recorded. Host Audie Cornish has the story. 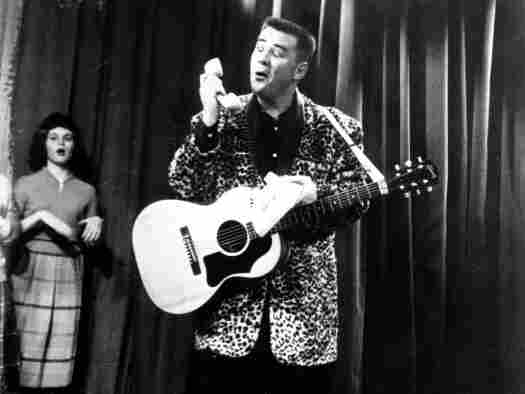 We're now going to take you on a bit of a detective story. First, we need a gumshoe, preferably from a group with a cool name.

DAVE PALMER: I'm Dave Palmer. I work for The Speek.

CORNISH: Next, we need an appropriate theme song as we lay out the story.

CORNISH: Long before MTV brought music videos into our living rooms, early pioneers had been setting up cameras and recording performances. But a lot of these have been lost or forgotten. That's where Dave Palmer and The Speek come in.

PALMER: We're a company that seeks classic music videos from the '50s, '60s and '70s, and sells them through iTunes.

CORNISH: And they're very picky about what counts as a music video.

CORNISH: This week, The Speek released what they believe is the holy grail of the genre, something they stumbled across completely by accident: the first music video.

THE BIG BOPPER: (Singing) Hello, baby. Yeah, this is the Big Bopper speaking.

PALMER: It has all the components of a modern video, albeit filmed 23 years before MTV came along. There's a painted setting -hand-painted in black and white. At the start of "Chantilly Lace," someone hands him a phone, which he puts to his ear. So there are props there, basic setting. These are the components of today's modern music video.

THE BIG BOPPER: (Singing) Chantilly Lace had a pretty face, and a ponytail hanging down...

CORNISH: "Chantilly Lace" was shot in 1958, after hours in a supper club in Texas just months before the Big Bopper was killed, along with Buddy Holly and Ritchie Valens, in a plane crash. Still have doubts this is the first music video? This is where J.P. Richardson Jr. comes in. He's the son of the Big Bopper. And after a chance meeting with a friend of his father...

J.P. RICHARDSON: She brought me these boxes, and one of these boxes was a copy of a magazine article from England - Disc Magazine - and the headline read: Records Will Be Filmed.

CORNISH: It was a quote from the Big Bopper, published just 10 or so days before that plane crash.

RICHARDSON: I tell people had my father lived, you'd have had Bopper Vision 20 years before you had MTV.

CORNISH: And if you wanted more proof of how visionary the Big Bopper was, in the same article he also predicted there would be machines that recorded television programs so people could watch them when they wanted to - long before the VCR or DVR, or even the term music video, was coined. You can see the Big Bopper videos at thespeek.com, or at bigboppermusic.com.

THE BIG BOPPER: (Singing) Ain't nothing in the world like a big-eyed girl, make me act so funny, make me spend my money, make me feel real loose like a long-necked goose, like a girl, oh baby that's what I like.

CORNISH: This is NPR News.