Accessibility links
Ahead Of Climate Talks, U.S. Leadership In Question A presidential pledge to reduce emissions two years ago went nowhere in Congress. Today, the U.S. is spewing more carbon dioxide than ever into the atmosphere. Without meaningful U.S. action on emissions, a global pact seems unlikely to emerge from U.N. climate talks under way in Durban, South Africa. 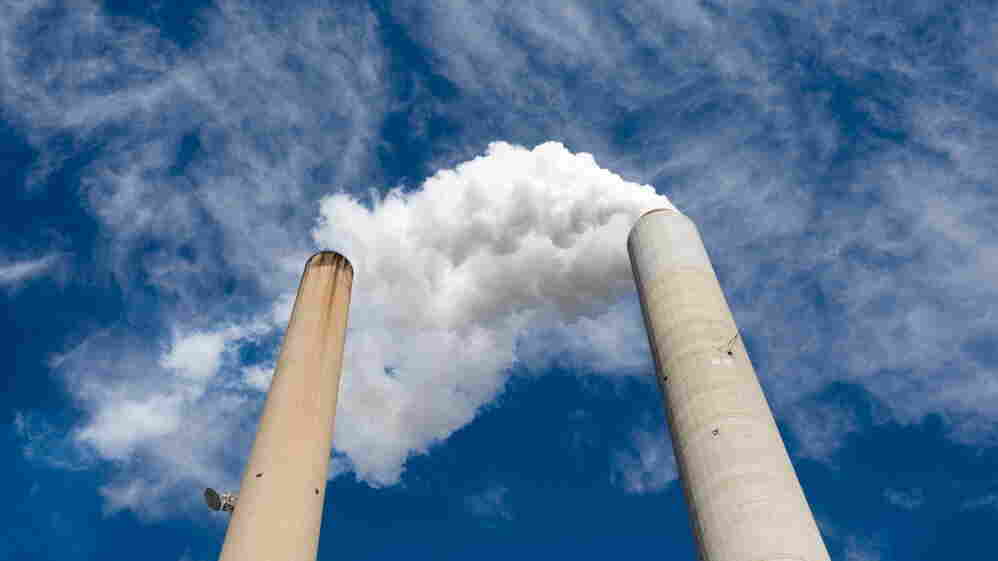 The U.S. is second only to China in emitting gases that cause global warming. Above, the smoke stacks at American Electric Power's Mountaineer power plant in West Virginia. Saul Loeb/AFP/Getty Images hide caption

A new round of United Nations climate talks is getting under way in Durban, South Africa, Monday. And domestic struggles here in the United States are hampering the global talks.

The United States is second only to China in emitting gases that cause global warming. Despite a presidential pledge to reduce emissions two years ago, we're spewing more carbon dioxide than ever into the atmosphere.

That's putting a crimp on the 20-year-long struggle to develop a meaningful climate treaty.

I'm not unrealistic about what we're able to achieve, but I'm very confident we can achieve more than we have done so far, which is basically zero.

There was a glimmer of hope at a U.N. meeting two years ago in Copenhagen. Nations weren't going for a binding treaty, but some pledged to take serious action anyway.

President Obama stood before the tense meeting and promised that the United States would do its part.

"Almost all the major economies have put forward legitimate targets, significant targets, ambitious targets," he said. "And I'm confident that America will fulfill the commitments that we have made, cutting our emissions in the range of 17 percent by 2020 and in the range of 80 percent by 2050, in line with final legislation."

Ambitious targets, indeed, but the last phrase, "in line with final legislation" ended up being a killer caveat.

The promise to cut emissions was contingent on Congress passing an aggressive cap-and-trade bill. But that 2,000-page bill went into the trash instead of onto the president's desk. The Great Recession briefly achieved what Congress didn't — national emissions fell for a short time. But no longer.

"Starting in 2010 it looks like we're starting to see an uptick again, and you would expect to see emissions continuing to increase in a business-as-usual case out to 2020," says Kevin Kennedy at the World Resources Institute.

The president's recently enacted fuel-efficiency standards for cars and light trucks will put a meaningful dent in our emissions, Kennedy says. And rules about power plants, due out early next year, could also reduce carbon dioxide emissions. How much, of course, depends on how stringent the rules are. States, especially California, have laws designed to lower their emissions in the coming decades.

But even with all those state and federal actions taken together, the World Resources Institute figures that the nation can't achieve a 17 percent reduction in emissions by 2020. New federal laws would need to fill the gap, and prospects for that aren't good.

"Nowhere else in the world do you see a political debate about whether climate science is real, whether or not the climate is actually changing," Kennedy says. "That political climate makes it very difficult to move forward in a comprehensive way. And that is something we need to address in this country."

Part of the problem is this: Even Congress members who accept the science of climate change are concerned that if the United States dramatically slashes its emissions, that could harm economic competitiveness. And by itself, U.S. action won't do much to slow global warming. Meaningful action requires an agreement that extends far beyond our national borders.

Nowhere else in the world do you see a political debate about whether climate science is real, whether or not the climate is actually changing. That political climate makes it very difficult to move forward in a comprehensive way.

And that brings us back to the climate talks in South Africa. Alden Meyer at the Union of Concerned Scientists says the weak actions domestically mean the U.S. doesn't have much leverage in the international talks.

"The U.S. is not able to show its partners how we are going to meet the 17 percent reduction President Obama committed to," Meyer says. Also we are struggling to come up with our fair share of the financing for developing nation action on technology, on adaptation, on preserving forests. So we're not bringing a lot to the table."

For years, Europe has taken the lead at the international talks. But the EU hasn't gotten others to follow. Scott Barrett at Columbia University holds out hope that things would be better if the United States led the way.

The great challenge is to identify actions that every major player is willing to take — actions that can make a difference to the climate without upsetting economic competitiveness around the world.

What's politically possible may not be as much as scientists say we need to accomplish to stabilize the planet's atmosphere, but Barrett says we need to start somewhere.

"I'm not unrealistic about what we're able to achieve," Barrett says, "but I'm very confident we can achieve more than we have done so far, which is basically zero."

And, he adds, climate change is the hardest problem the world has ever tried to address collectively.