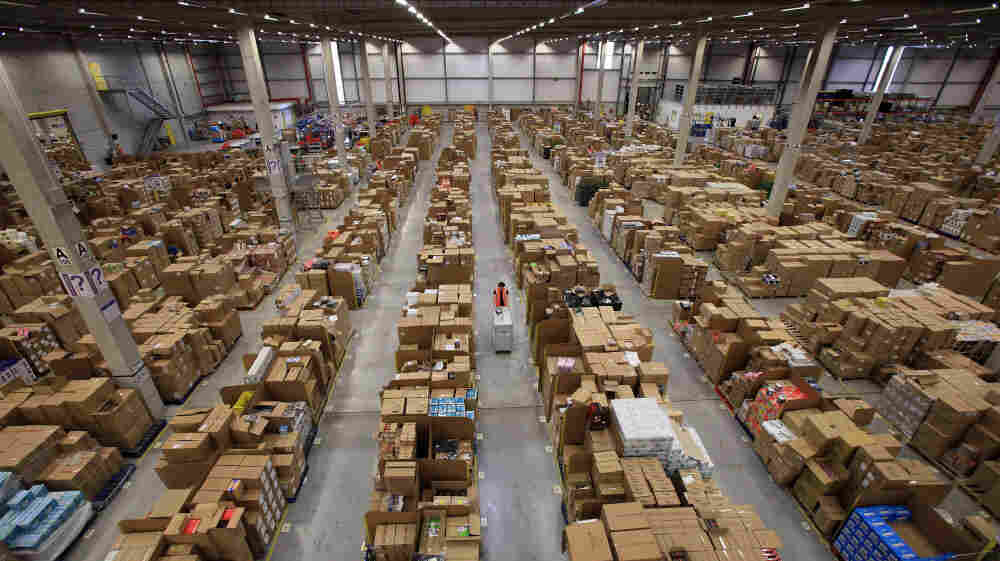 Workers process orders at an Amazon.com fulfillment center in Swansea, Wales, as they prepare for their busiest time of the year. Matt Cardy/Getty Images hide caption

Shoppers stormed retail stores this past weekend, and now on Cyber Monday, many are clicking their way to more purchases.

"I am definitely a price-based shopper," said Sarah Kelly, a 28-year-old Washington, D.C., resident who bought a KitchenAid mixer Monday morning as a holiday gift. She also bought shoes, clothes and other presents after waking early to search for online coupons and shipping offers. "I only purchase if the shipping is free," she said.

The initial data are encouraging. Between Nov. 1 and Nov. 20, online sales hit $9.7 billion, a 14 percent increase over the same period last year, according to comScore. And PriceGrabber.com, an online comparison shopping company, said that on Sunday, traffic across all categories of merchandise rose 18 percent, compared with 2010.

Typically, online sales shoot up on the first weekday after Black Friday because shoppers have used the long weekend to look over merchandise and prices in stores. By Monday, they have a better idea of what they want, and then start searching the Internet for the best prices.

In the past, many people also waited until Monday to shop online because they wanted to use the faster Internet connections available at work. But now, with more shoppers having high-speed connections at home and on hand-held devices, such as smartphones and tablets, they can shop before work and well into the evening, searching for bargains.

"Cyber Monday figures to be a make-or-break day for many online retailers," IHS economist Erik Johnson wrote in an assessment. The firm "is projecting that seasonally adjusted e-commerce retail sales will increase 12.5 percent year-on-year in the fourth quarter and surpass $50 billion for the first time."

The success of this year's Black Friday sales suggests the results may be good for Cyber Monday. ShopperTrak — a Chicago-based company that measures retail and mall foot-traffic — said Black Friday sales rose 6.6 percent over the same day last year. That represents $11.4 billion in retail purchases — the most ever spent on a single day.

"This is the largest year-over-year gain ... for Black Friday since the 8.3 percent increase we saw between 2007 and 2006," ShopperTrak founder Bill Martin said. "Still, it's just one day. It remains to be seen whether consumers will sustain this behavior through the holiday shopping season."

Retailers — both in stores and online — have reason to be wary because many shoppers are still being hurt by the weak job market, falling home prices and continuing uncertainty.

Brick-and-mortar merchants, such as Wal-Mart and Sears, are hoping that consumers will be in the mood to keep coming to stores. And they hope that those who want to shop online will come to their websites for such purchases.

But online-only retailers, led by Amazon, have pricing advantages because they refuse to collect sales taxes on most purchases. They say they are not responsible for collecting state and local sales taxes, based on a 1992 U.S. Supreme Court decision involving a mail-order business. The National Conference of State Legislatures estimates about $23 billion in online sales taxes will not be collected in 2012.

That sales tax advantage, combined with free shipping offers for the holiday season, send many consumers into cyberspace seeking bargains. With millions of consumers now being able to shop using their smartphones and tablets, analysts say the shift to online browsing, price comparing and purchasing will accelerate.

"This year promises to be a Merry Christmas indeed for online retailers," comScore's Fulgoni said.