Accessibility links
In Egypt's Vote, Islamists Expect Strong Showing The Muslim Brotherhood was founded in Egypt more than 80 years ago and is a presence in dozens of Muslim countries. Then-President Hosni Mubarak outlawed the group, but it is now legal and competing openly in the country's parliamentary elections. 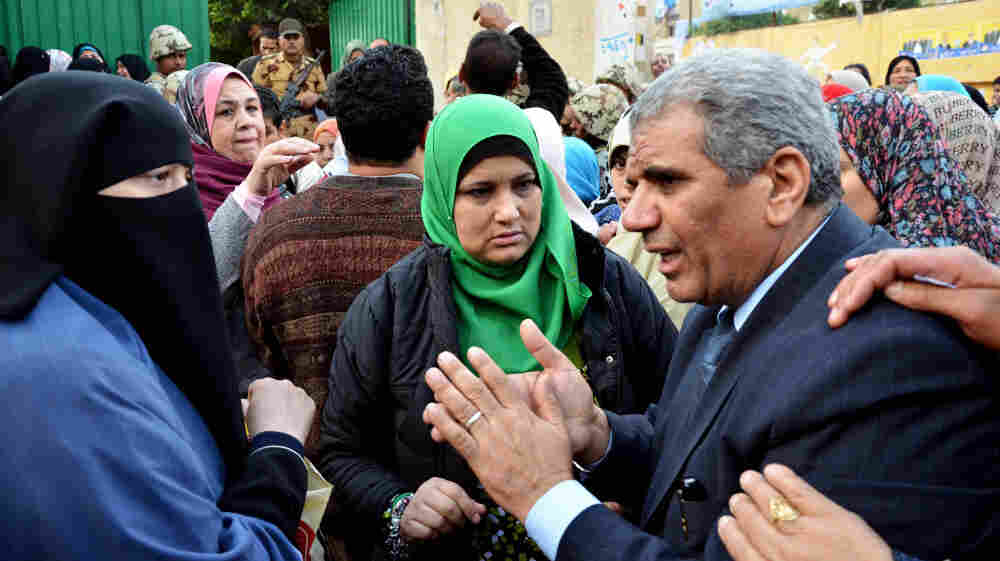 Sobhi Saleh (right), a senior member of the Muslim Brotherhood and a candidate for parliament, speaks to voters at a polling station in Alexandria, Egypt, on Monday. The Brotherhood is expected to make a strong showing in the polls. Tarek Fawzy/AP hide caption 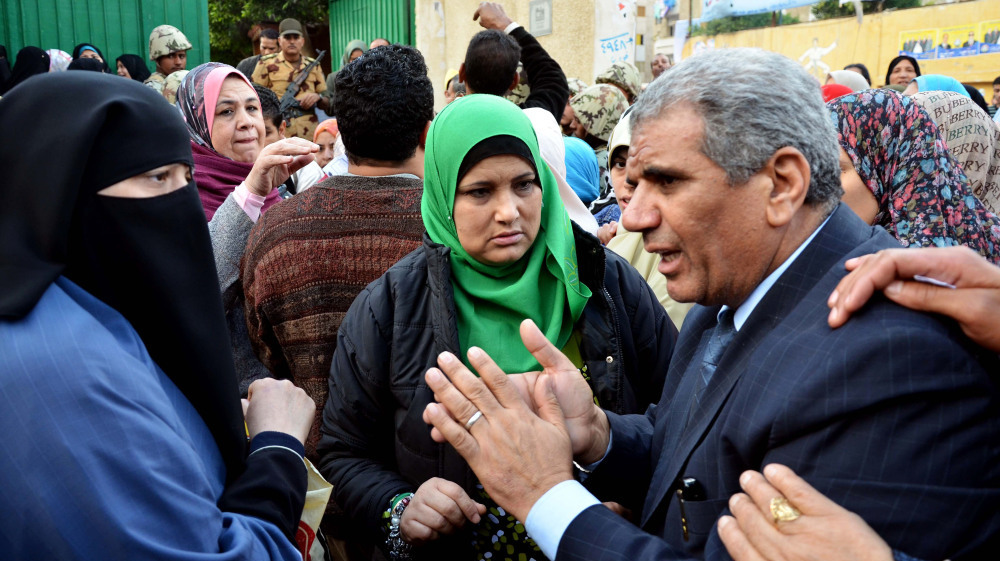 Sobhi Saleh (right), a senior member of the Muslim Brotherhood and a candidate for parliament, speaks to voters at a polling station in Alexandria, Egypt, on Monday. The Brotherhood is expected to make a strong showing in the polls.

Dozens of veiled women tried to squeeze past each other Monday and into a polling station in the working-class neighborhood of Raml in the northern Egyptian city of Alexandria.

They were eager to cast ballots for a clean-shaven man in a crisp blue suit and matching tie.

His name is Sobhi Saleh, and he heads the Muslim Brotherhood's Freedom and Justice Party ticket in three of Alexandria's districts. The party is considered the best organized in Egypt and is expected to do well in the country's first election since President Hosni Mubarak was toppled in February.

Many voters were thrilled to have such a choice of candidates. But that didn't keep one voter from complaining about the long lines. Saleh joked that she ought to cut in front of the other women.

Saleh appeared more relaxed than a year ago. At that time, the Brotherhood boycotted parliamentary elections that were widely seen as fraudulent.

Back in the 2005 parliamentary elections, Brotherhood members captured 88 seats — or about 20 percent of the total. However, Brotherhood members were not officially with the Islamist group and had to serve as independents because the group had been banned under Mubarak.

Still, the Brotherhood and its supporters served as the core of a noisy opposition that drew people's attention to the corruption and graft in Mubarak's government.

During the 2010 election season, Saleh was harassed and beaten by Egyptian security forces. Today, he sings their praises.

They, in turn, treat him with respect. At one polling center, a police official bowed as he shook Saleh's hand. Good luck and God bless you, the policeman told the candidate.

Saleh says his party's goal is to make life easier for Egyptians.

"We will advocate what the Egyptian people want, and they will feel like citizens of a free country," he said.

We will advocate what the Egyptian people want, and they will feel like citizens of a free country.

Yet many Alexandria residents worry that Islamists vying for seats here and across Egypt will do the opposite.

Their fears are bolstered by candidates pledging to enforce a stricter observance of Islamic codes. In one recent incident in Alexandria, members of a fundamentalist movement covered up semi-nude mermaid statues with blankets.

Egyptian Christians like Mina Samir predict violent attacks against Coptic Christians like him will increase if the Muslim Brotherhood is in charge. The 22-year-old business major also fears Islamist legislators will eventually ban access to the Internet, television and even cars because they were invented by non-Muslims.

Fellow university student Alaa Ramadan shares his concerns. An Egyptian Muslim who was born in Switzerland, the 22-year-old says she will go back to Europe if the Brotherhood pursues a fundamentalist agenda.

"Their strategy is to go to the poor areas and talk to residents about Islam," she said. "They tell them they have to vote for their candidates for Islam to win."

Saleh dismisses these fears as nonsense. He says the party's goals are to improve the Egyptian economy and government services, and that most voters know that.

They, like many other political parties, sent out scores of campaign workers to hand out glossy fliers and talk to voters standing in line at polling stations, even though it was against election rules.

Saleh spent much of the day inside key polling stations in Muslim Brotherhood strongholds. He wanted to make sure that voting was going smoothly, though his presence was also a violation of the election rules.