Accessibility links
Drone Pilots: The Future Of Aerial Warfare The U.S. Air Force says it will train more drone pilots in 2011 than fighter and bomber pilots combined. The distance between the pilot and the remotely controlled vehicle he flies is redefining what it means to be a pilot and creating some friction within the Air Force. 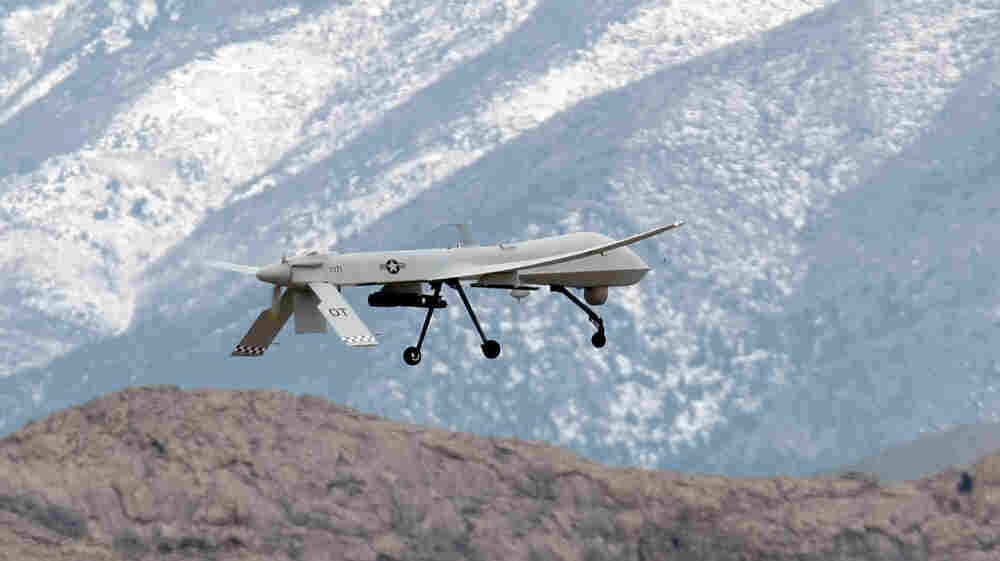 Unmanned aerial vehicles, like this Predator (shown here in 2009 during training at Creech Air Force Base in Indian Springs, Nev.), make up the fastest growing segment of the U.S. Air Force. Ethan Miller/Getty Images hide caption 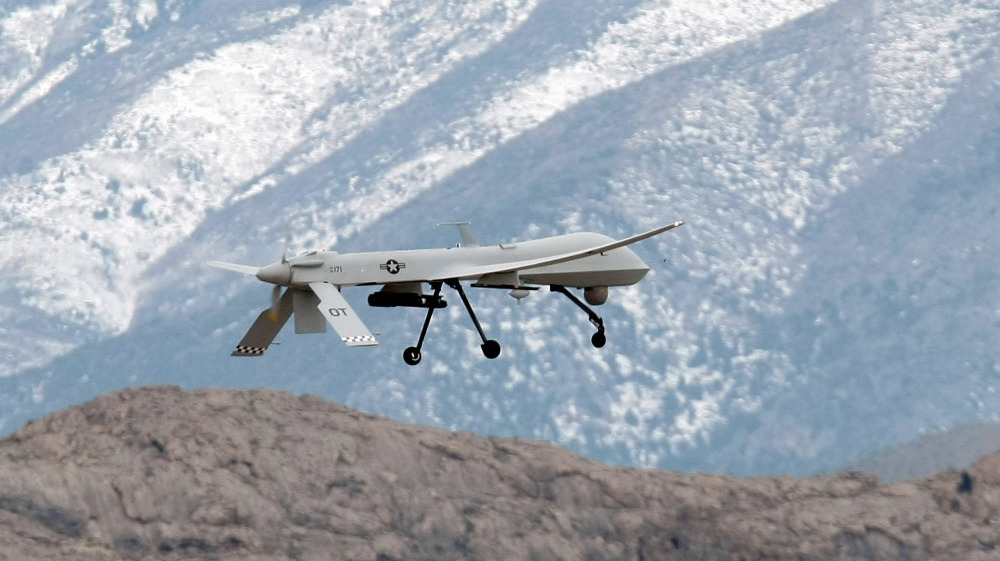 Unmanned aerial vehicles, like this Predator (shown here in 2009 during training at Creech Air Force Base in Indian Springs, Nev.), make up the fastest growing segment of the U.S. Air Force.

To understand how important remotely piloted aircraft are to the U.S. military, consider this: The U.S. Air Force says this year it will train more drone pilots than fighter and bomber pilots combined.

And that's changing the nature of aerial warfare — and the pilots who wage it.

To him, flying is physical: the pull of gravity, the sounds inside the cockpit.

Steve joined the Air Force in 1997 and started out flying F-15s. But he quickly started to see signs that his world was changing. When he was given a chance to fly drones, he took it.

Now, he is at Holloman Air Force Base in New Mexico helping the Air Force build a different kind of pilot.

The biggest training center of its kind in the United States, Holloman has become the primary training ground for pilots who fly unmanned aerial vehicles, or drones.

There, pilots learn to fly the MQ-1 Predator and the MQ-9 Reaper, two of the military's most important weapons systems. These remotely controlled planes can hover in the air 24 hours at a time, collecting intelligence or carrying out a strike in Afghanistan. 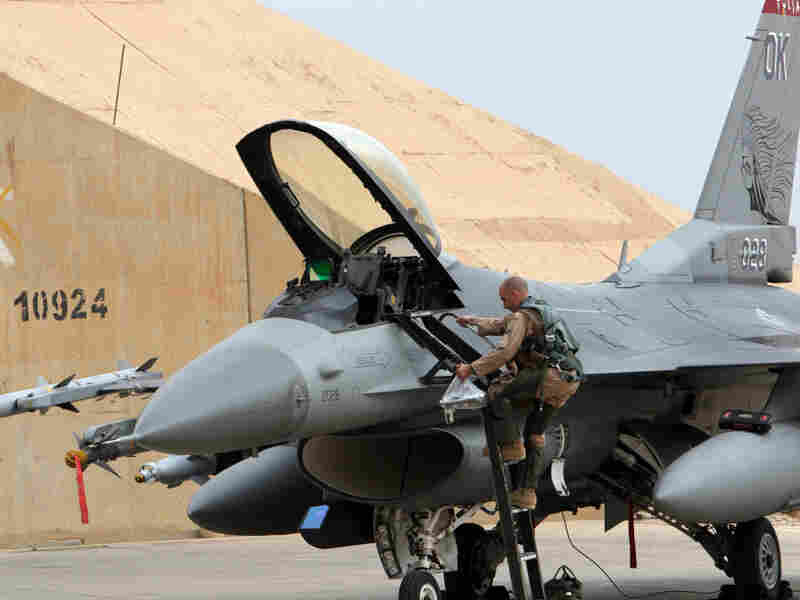 One of the reasons for the shift to unmanned aircraft has been fighter jet budget cuts. Here, a pilot climbs into a U.S. F-16 at Al Asad Air Base in Iraq on Nov. 1. Ali Al-Saadi/AFP/Getty Images hide caption 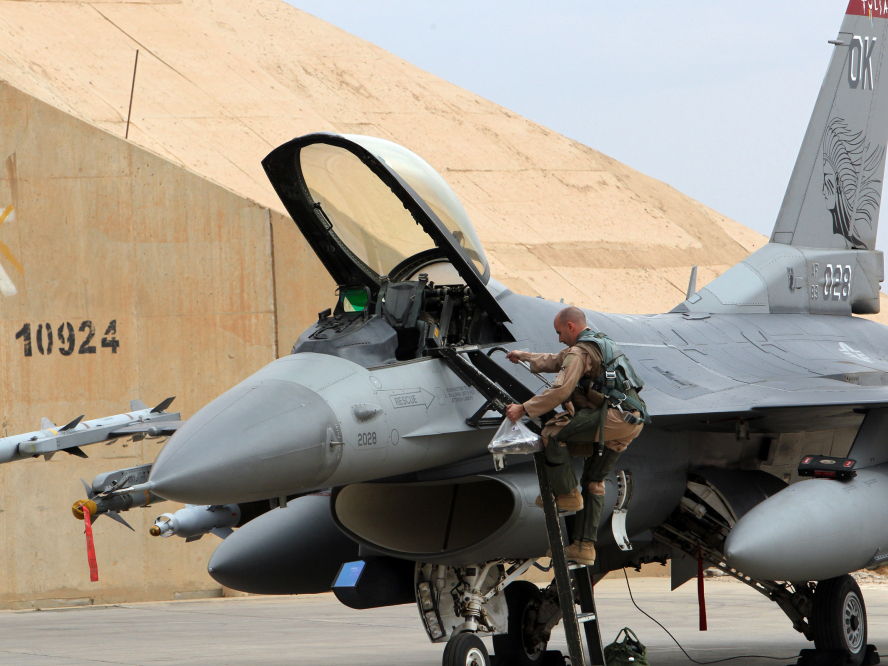 One of the reasons for the shift to unmanned aircraft has been fighter jet budget cuts. Here, a pilot climbs into a U.S. F-16 at Al Asad Air Base in Iraq on Nov. 1.

But the pilots are thousands of miles away, sitting in front of a bank of computer screens. And that distance, which is the strength of the program, has also created unique challenges.

The student pilots at Holloman begin their training in simulator bays — small rooms jam-packed with computer processors and monitors. It's there that they first get their hands on the remote controls.

At their workstations, the student pilot sits on the left, the sensor operator — the person who monitors the aircraft and weapons systems — on the right. An instructor loads in images of Afghanistan and gives the assignment: The pilots, sitting in New Mexico, are to fly a drone over Afghanistan, providing an escort for Humvees.

"They're going to scan the route ... that they're supposed to travel on and see if there's any threats to that convoy," an instructor named Matt explains.

Matt, like Steve and every other instructor and student at Holloman Air Force Base, are identified only by rank and first name to help protect their identity because of the "sensitive nature" of the remotely piloted aircraft mission, the Air Force says.

There are two big reasons for the shift. The first was the Sept. 11 attacks: America's borderless war on al-Qaida catapulted drone technology onto the front lines.

The second reason has been budget cuts: Air Force fighter pilots started to see their squadrons disappear. That's what happened to another lieutenant colonel named Mike. Until a year ago, he was an F-15 pilot. Now, he's also an instructor at Holloman.

"I felt with the F-15 drawdown that that community was closing up, and there'd be more opportunity but also a chance to be part of the fastest growing part of the Air Force," Mike says. 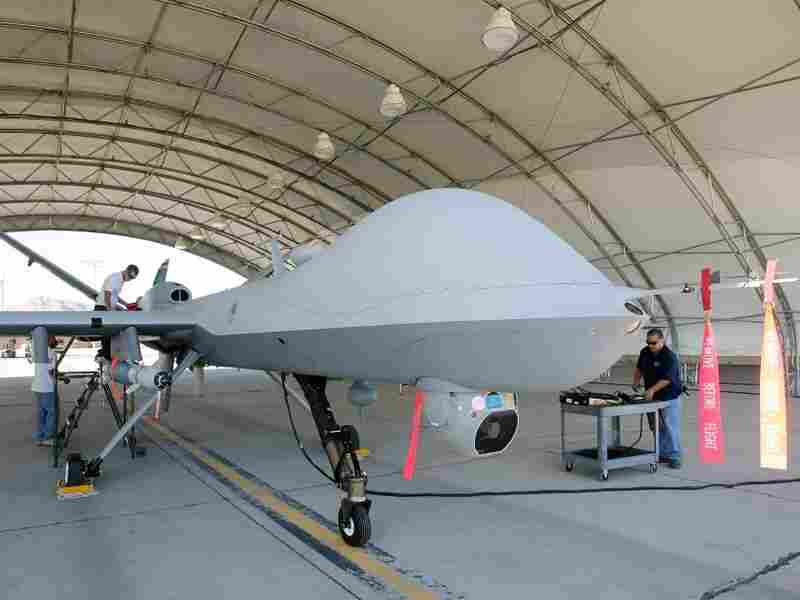 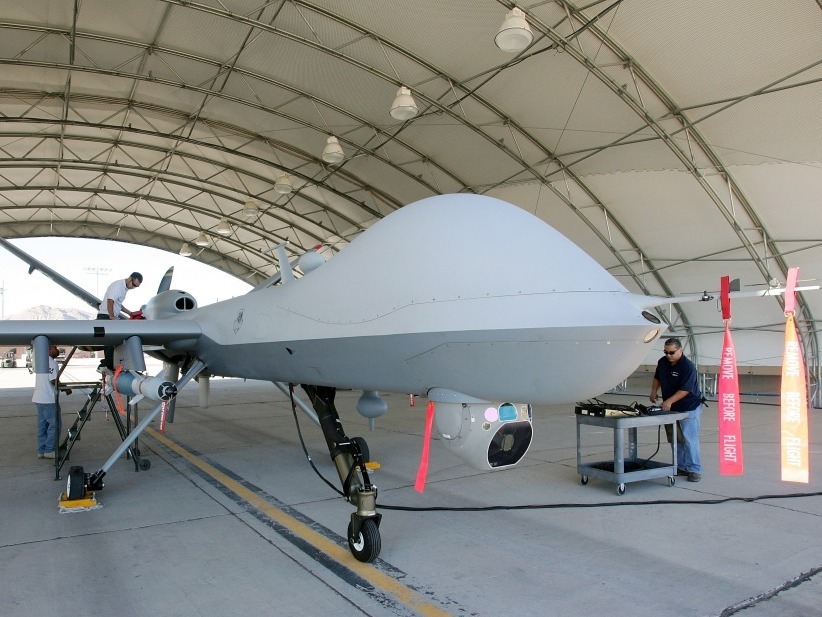 Mechanics prepare an MQ-9 Reaper for a training flight, Aug. 8, 2007, at Creech Air Force Base in Indian Springs, Nev.

Now, the challenge for Mike, Steve and other instructors at Holloman is to convince students that when they're operating drones, they are flying real airplanes.

A shift can go for hours, until another team comes to relieve them.

Further out on the flight line sits one of the test planes, the MQ-9 Reaper.

Training can be the only time drone pilots actually see the planes they'll fly, says Steve, the instructor.

"You normally just walk out to the container and you sit down and you fly, but you don't actually see this, and you're physically dislocated from where it's at," he says.

Until recently, most drone operators were regular Air Force pilots. Now, the service is reaching out to people who've never even flown before. And that has caused friction within the Air Force as it tries to redefine what it means to be a pilot.

"There's a cultural divide," says Kelly, a 46-year-old Air Force reservist from Texas who is now a student at Holloman. Kelly grew up wanting to be a fighter pilot, but his vision is not good enough for that job. But he can fly drones. And he says that irks fighter pilots who see themselves at the top of the Air Force pyramid.

The Air Force has been working to bridge the divide between these two groups of fliers. First off, drone operators are called pilots, and they wear the same green flight suits as fighter pilots, even though they never get in a plane. Their operating stations look like dashboards in a cockpit.

But all of that has made tensions worse. Aaron is another Holloman student. He used to fix military communications equipment; now he's training to operate drones.

"There's still a lot of animosity. You see people in a conventional aircrew that wonder why we get to wear the flight suits even though we don't leave the ground, why do we need flight physicals, why do we get incentive pay — stuff like that," he says.

Distance Between Pilot And Plane

Steve and Mike, the former fighter pilots turned drone instructors, say the Air Force is going through a cultural change. It all goes back to the distance drones create — between the pilot and his plane. It's something Steve is still trying to make sense of for himself.

"That distance and that separation is there that prevents you from feeling that piece of the airplane, or maybe being as one with the airplane. But what it also does is take the risk out of you flying the airplane, so you don't have to worry about being shot down," he says.

So the very thing that protects these pilots — not being in the cockpit — is what makes them wonder if they're really pilots.

Outside, an F-22 flies overhead — a plane with a fighter pilot in the cockpit. Fighter jets do fly out of Holloman. It helps remind new pilots like Kelly how they are supposed to think of themselves when they're flying a drone.

At least that's what he has to tell himself each time he sits at a computer, operating a plane thousands of miles away that he has never seen.