Accessibility links
Alan Rickman: From Severus Snape To 'Seminar' From Sense and Sensibility to Die Hard to Harry Potter, actor Alan Rickman's talents have made him recognizable to generations of moviegoers. Now, he's bringing that legacy back to the stage with a new Broadway play, Seminar. 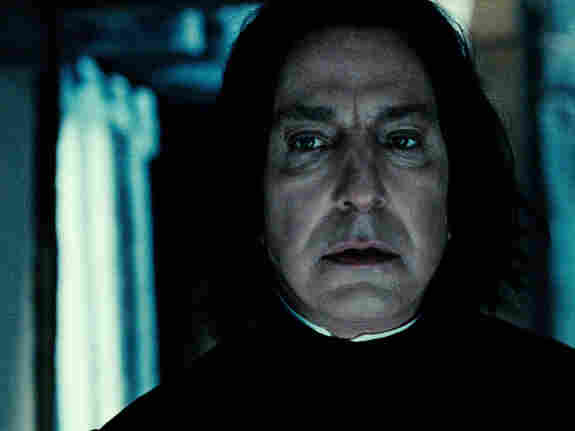 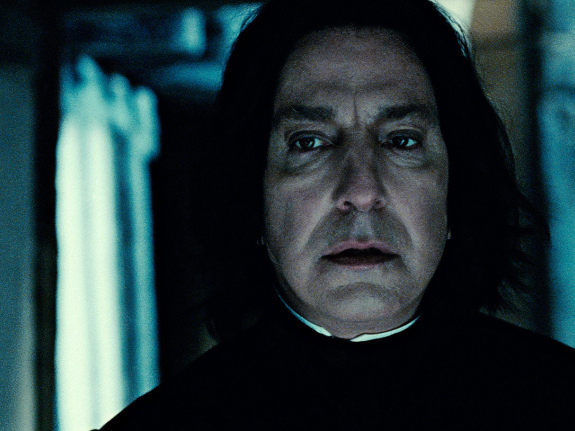 Actor Alan Rickman has played a loving husband, a terrorist leader, a stern professor of the dark arts and even a caterpillar; from Sense and Sensibility to Die Hard to Harry Potter, his talents have made him recognizable to several generations of moviegoers.

Now, Rickman — a former member of the Royal Shakespeare Company — is bringing that legacy back to the stage with Seminar, a new Broadway play about a literary celebrity who gives writing lessons to four aspiring young novelists.

Rickman tells NPR's Neal Conan about returning to the stage and playing the villain.

On the camaraderie of stage actors

"I'm very aware that when one is acting in the theater, you do become kind of animal about it. And you're reliant on instincts rather than tact a lot of the time. So the rehearsal room does become a bit of a marketplace, and new plays risk everybody's sensibilities. That's the whole point about them. But, you know, hopefully, ultimately, [Seminar playwright Theresa Rebeck is] happy because she knows we're all there because we respect her writing so much. ...

"Actors are actually very supportive of each other. ... In my experience, [writers are] quite nervous of each other, and probably quite rightly when it's such a solitary occupation. And, you know, months and years of work can be dashed by one bad review or a book that doesn't sell or something. Actors usually have each other."

On what makes New York special for stage actors

"I love working in New York theater. ... It is very demanding, but it's good to be in a city where you feel that theater is actually part of the life of the city. You know, London is so sprawling, and you can sometimes forget that anybody else is on a stage anywhere else. But here, it's, you know, your friends and neighbors."

On playing the Sheriff of Nottingham in Robin Hood: Prince of Thieves and other bad guys

"You can't ... say to yourself, 'I am playing a villain.' [The characters] don't think they are anymore than heroes think that they're heroes. They're just who they are and this is what they want. It's other people that put that label. So you can't judge the character you're playing ever.

"And I suppose all I can say is as time has gone on, I've been fortunate to do things like Sense and Sensibility and Truly Madly Deeply. [In] Love Actually, [Rickman's character, Harry] might have been naughty, but not exactly a villain. ...

"[Playing a villain is] a very small part of whatever I've done. It's like two or three parts, and they just happened to have big publicity budgets. But ... it's not the major area of my work."