Accessibility links
What Will Become Of The Kyoto Climate Treaty? The 1997 treaty was supposed to be a first step toward more ambitious actions on climate change. But it's now on the brink of fading into irrelevance as unified, global actions on climate policy have been almost nonexistent. 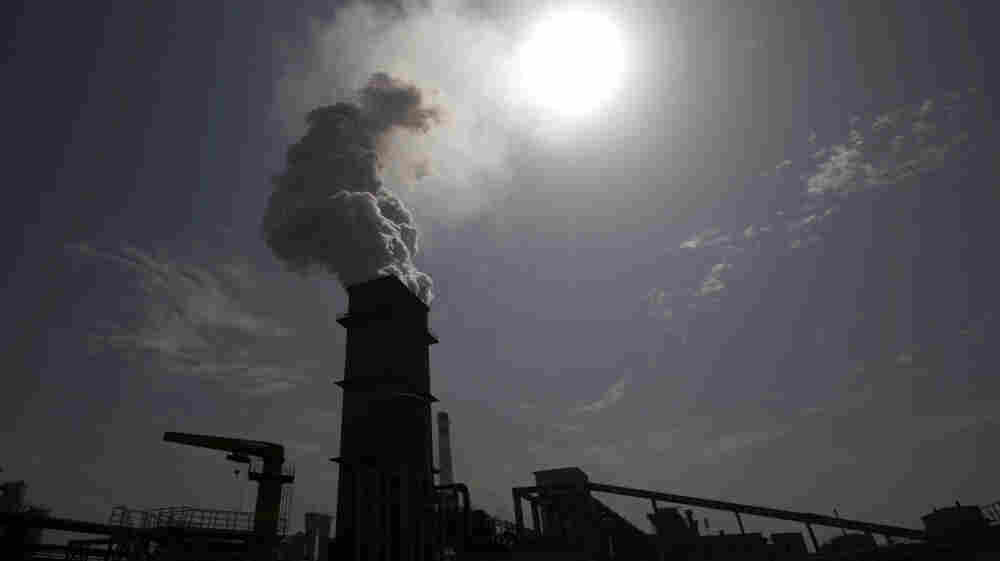 Key provisions of the Kyoto Protocol expire in December of 2012, and experts say there's no real global framework in place to replace the treaty that was supposed to be the first step toward ambitious actions on climate change. Above, a coal-fired power plant in eastern China. China is now the leading carbon dioxide emitter in the world. AFP/Getty Images hide caption

As diplomats from around the world gather in Durban, South Africa, for talks about climate change, a big question looms: What will become of the Kyoto climate treaty, which was negotiated with much fanfare in 1997. The treaty was supposed to be a first step toward much more ambitious actions on climate change, but it is now on the brink of fading into irrelevance. That could have major implications for the future of United Nations climate talks.

Even under the best of circumstances, the Kyoto protocol would have made a barely measurable dent in the amount of greenhouse gases flowing into the Earth's atmosphere.

We have very little space left in our atmosphere to be continuing to pollute before we cross certain thresholds where impacts will be inevitable.

First, the United States decided not to ratify the treaty, so our emissions aren't covered by the pact. Then China leapfrogged the U.S. to become the world's biggest emitter of carbon dioxide. But China is treated like a developing country under the Kyoto treaty, which means it has no obligations. Even so, Europe and a few other nations have been soldiering on.

But Jennifer Morgan, director of the Climate and Energy Program at the World Resources Institute says the treaty's day of reckoning now looms.

"The Kyoto Protocol's first commitment period, its first set of targets, ends next year. So the big question is, 'What happens next?'" she says. "Do the Kyoto countries, like Europe, move forward and put their new targets into a legally-binding treaty?"

The prospects are slim: Canada, Japan and Russia say they are not interested in pledging new reductions under the treaty. The United States and China prefer an alternate approach, which came out of the climate talks two years ago in Copenhagen. They have pledged to take action individually, but not under a binding treaty. However, those commitments aren't enough to prevent a 2-degree increase in global temperature, the internationally agreed upon goal.

"We have very little space left in our atmosphere to be continuing to pollute before we cross certain thresholds where impacts will be inevitable," she says. "So no matter what you're looking at, the current commitments are really quite inadequate."

The Future Of The Kyoto Protocol

The European Union has been the Kyoto Protocol's biggest champion, but it has ambivalent feelings about it now. Michael Grubb, a professor of climate change and energy policy at the University of Cambridge, says on the plus side, Europe likes the treaty because it has spelled out international rules, such as standards for counting carbon emissions. Europe uses those rules to limit its own emissions.

"Europe does not want to kind of jump into a void where there aren't any really agreed rules that bind on anything," Grubb says. "It's very reluctant to kill off the only actual legal framework that we've got."

On the downside, Europe is disappointed that the rest of the world did not follow its example. And Grubb says the economic crisis there has diminished the continent's appetite for more aggressive action.

"So there's a feeling that Europe is in a bit of a holding position on climate change, I'd say."

The real fight over the Kyoto treaty comes from nations in the developing world. They see the pact as a critical symbol of commitment by the rich nations to clean up a problem they largely created. South Africa's foreign minister, Maite Nkoana-Mashabane, is presiding over the climate talks in Durban. And she says it's vital to these talks to either rekindle the Kyoto treaty, or to make progress on a successor.

More On The U.N. Climate Talks

"If this question is not resolved, the outcome on other matters in the negotiations will become difficult. A solution must be found," Nkoana-Mashabane says.

Her choice of words is quite diplomatic here: In fact, some nations have been threatening to pull the plug on the whole process if the Kyoto treaty is not reinvigorated. And they can do that, since the United Nations operates by consensus.

Alden Meyer, director of strategy and policy at the Union of Concerned Scientists, says that move would affect everything that's on the table at Durban, which is much more than commitments to limit emissions.

"If you think about it, it's actually counterproductive for developing countries to not move forward on adaptation, on reducing deforestation, on climate finance, because those are all things in their own self-interest. But the level of emotion and anger could be so big that they wouldn't think in those kind of terms and they would sort of block everything."

Technical structures set up by the Kyoto Protocol would live on even if nations didn't adopt new commitments under the treaty. But by now, the pact governs less than 20 percent of global emissions. So even if nations keep the treaty on life support in Durban, it has already lost its practical role as the foundation for a more ambitious climate agreement.