Accessibility links
Bringing Audi Back, For A Younger Audience Audi has seen a near tenfold growth in the past 20 years, and the company has also become the new status car for young urban professionals. That's reflected in a viral marketing campaign featuring Justin Timberlake, who's a decade younger than his celebrity counterpart at Chrysler, Eminem. 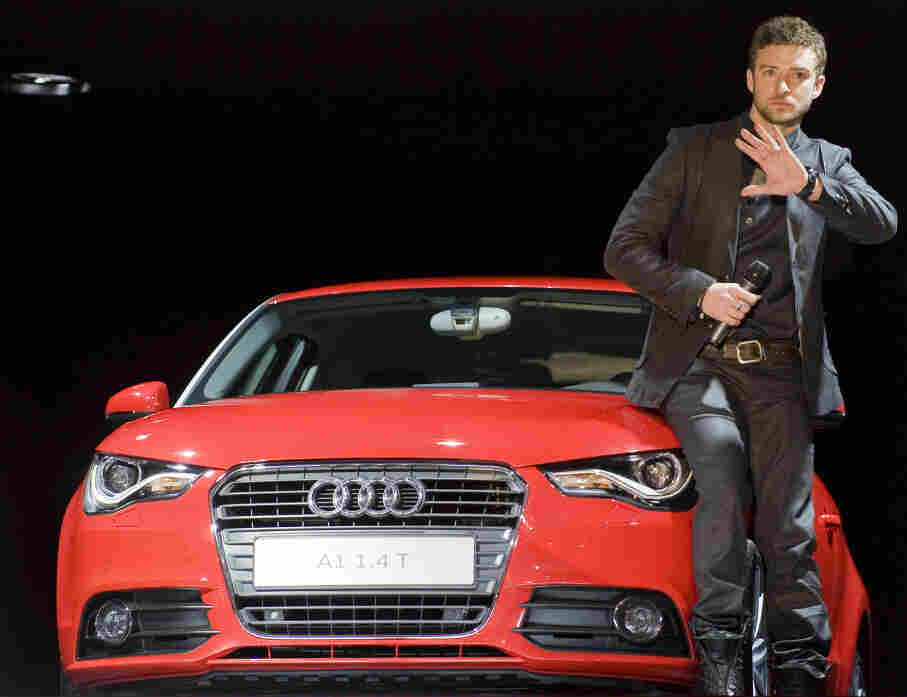 Justin Timberlake presents the Audi A1 at the Geneva Motor Show in Switzerland in 2010. Timberlake stars in a viral marketing campaign for the car company aimed at a younger demographic. Audi's share of the luxury market has risen in recent years. Martin Meissner/AP hide caption

Despite the sluggish economy, it's been a pretty good year for luxury carmakers. Deluxe brands such as Mercedes, Volvo and BMW have seen double-digit growth.

But the German carmaker Audi is the standout. It's seen a near tenfold growth in the past 20 years, and the company has also become the new status car for young urban professionals.

In the pop star car commercial smackdown, the Fiat 500 flaunts Jennifer Lopez, Chrysler rolls with Eminem, and Audi — not to be outdone — produced a whole series of Internet thriller movies with Justin Timberlake.

Not only has Timberlake brought sexy back, he also helped do the same for Audi. The company uses viral marketing that focuses on very young consumers. Timberlake is about a decade younger than JLo or Eminem.

Audi ranks sixth in percent of market share among luxury brands. It nearly doubled that share from 2006 to 2011 — a significant increase from the approximately 1 percent it held 20 years ago.

"We have the most affluent consumer for the most part, and we do have the youngest consumer," says Scott Keogh, head of marketing at Audi. "It's an average age of somewhere around 47 or 48 [years old], and most of our competitors are ... deep into the 50s."

But Keogh doesn't exactly call it the yuppie crowd.

"Because I'll give you my definition or, I think, of how you're giving a definition of the yuppie, [as] crass, aggressive, somewhat in-your-face flashy money, and I think that is the exact opposite of what Audi is," he says.

Whether they're called yuppies or not, Audi is winning young consumers in the U.S., where it's gone from about 1 percent of the luxury car market to nearly 10 percent in 20 years. But Audi has come a lot further than that.

Almost exactly 25 years ago, Audi was at the center of a controversy over unintended acceleration following a report on 60 Minutes. Later, the National Highway Traffic Safety Administration said it wasn't able to find a problem that would produce sudden acceleration and brake failure in Audis, but that happened after the brand was almost killed off in the U.S.

After getting clobbered that hard, what else was there to do?

"Audi did a couple of things: They made ... enormous investment in the brand. When I say enormous, I mean hundreds of millions of dollars," says Rebecca Lindland, a senior analyst with IHS Automotive.

Lindland says the company focused in an intense way on the design of the cars to make sure they stood apart. It changed the look and the proportions of the vehicles — things that consumers may not understand, she says.

"You don't know why somebody's absolutely beautiful, but at the end of the day it comes to their bone structure. It's the same thing with cars. It's like the perfect cheekbones and the appropriate eyebrow formation, and everything kind of comes together," she says.

Those proportions not only have caught on with younger buyers in the U.S. but also with Chinese bureaucrats. Last year's Audi sales were up nearly 50 percent in China; comparatively, last month they went up 25 percent in the U.S. compared with October 2010.

"They provided people with a brand that not everybody sees all over the place, and then they did it with really cool headlamps," Lindland says with a laugh.

She says young consumers, especially luxury buyers, would rather stand out than blend in, but in an understated way.