Accessibility links
Jeffrey Rosen: Interpreting The Constitution In The Digital Era Technologies like GPS and social media are posing new challenges to interpreting the Constitution's guarantees of privacy and free speech. Law professor and journalist Jeffrey Rosen says we're now in an era the Founding Fathers could never have imagined, in which private companies are determining the rules for what can be shared. 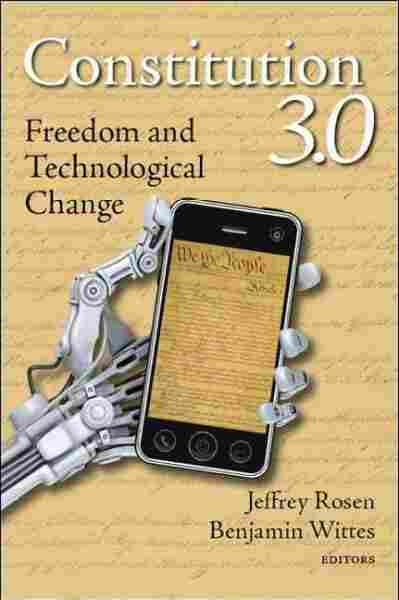 by Jeffrey Rosen and Benjamin Wittes

GPS monitors can track your every movement. Brain scans can now see lies forming in your brain. And advancements in genetic engineering may soon allow parents to engineer what their children will look and be like.

These new technologies are "challenging our Constitutional categories in really dramatic ways," says George Washington University law professor Jeffrey Rosen. "And what's so striking is that none of the existing amendments give clear answers to the most basic questions we're having today."

On Wednesday's Fresh Air, Rosen, the co-editor of the new book Constitution 3.0: Freedom and Technological Change, details how technological changes that were unimaginable at the time of the Founding Fathers are challenging our notions of things like personal vs. private space, freedom of speech and our own individual autonomy.

Rosen points to United States v. Jones, a case the Supreme Court is currently considering. At issue is whether police need to have a warrant from a judge before attaching a secret GPS monitor to a car to track a suspect around the clock.

"The relevant constitutional text is the Fourth Amendment, which says, 'The right of the people to be secure in their houses, persons, papers and effects against unreasonable searches and seizures shall not be violated,' " he says. "But that doesn't answer the question: Is it an unreasonable search of our persons or effects to be monitored in public spaces?"

The government contends that the Fourth Amendment only bans warrantless searches of private spaces — and that a GPS device is just an extension of basic human surveillance. But some others disagree, Rosen says. Judge Douglas Ginsburg, a member of the U.S. Court of Appeals in Washington, D.C., argued that there is a difference between short-term and long-term surveillance, and that people have the expectation of privacy in both situations.

What It Means To Be 'Always On' A Smartphone

Regardless of what the Supreme Court decides, Rosen says, the "GPS case has the potential to be the most important privacy case of the decade."

"Will the justices be willing to look beyond the existing Fourth Amendment categories, which have been inadequate to confront these new virtual technologies, and take a leap of imagination?" he asks. "Really, the leap they're being asked to take is the one that Justice Brandeis took in the 1920s when the court decided for the first time the constitutionality of wiretapping."

In that instance, Brandeis wrote the dissenting opinion in Olmstead v. United States, a landmark case in which the court ruled that neither the Fourth Amendment nor the Fifth Amendment protects a defendant against having personal conversations wiretapped by federal agents.

"Brandeis noted that at the time of the framing of the Constitution, a far less intrusive search — namely breaking into someone's home and riffling through their desk drawers to identify a critic of King George III — was the quintessential example of an unreasonable search," Rosen says. "[Brandeis added] that it was now possible to invade the privacy of people of both ends of a telephone wire. And then ... Brandeis looked forward to the age of cyberspace. He said, 'Ways may someday be developed — without breaking into desk drawers — to extract papers from home and introduce them in court before a jury. ... The court should translate the Constitution and recognize that you don't need a physical trespass to create an unreasonable search.'"

Rosen says it took decades for the Supreme Court to embrace Brandeis' insights. In 1967, the high court overruled Olmstead v. United States in the case Katz v. United States, which extended the Fourth Amendment to include all areas where a person "has a reasonable expectation of privacy." Law enforcement agents were then required to obtain a warrant before wiretapping suspects.

The Constitution In The Year 2025

But how the Fourth Amendment — and the other amendments to the Constitution — should extend to quickly changing technologies is unclear.

The Brain on the Stand
Google's Gatekeepers
The Web Means the End of Forgetting
Roberts v. the Future

Recently, Rosen and his colleague Benjamin Wittes asked leading legal scholars to imagine technologies that might be developed in the next few decades that would challenge current constitutional laws. Their hypothetical scenarios, collected in Constitution 3.0, address questions about a variety of topics, including security, free speech, privacy and the constitutional right against self-incrimination.

"[McLaughlin said,] 'It would be theoretically possible to click on a picture of anyone in the world — say me — back click on me to find out where I came from, forward click on me to see where I'm going, and basically have 24/7 ubiquitous surveillance of everyone on the planet at all times," Rosen says. "This is a GPS case on steroids. ... [McLaughlin said], 'First of all, should Google do this? And would it violate the Constitution?' And the fact that there was no clear answer to that question ... interested me and made me think how inadequate our current Constitutional doctrine is to resolve the most profound privacy cases of our age."

Rosen says if this scenario — as unlikely as it may seem — were to take place, it would raise legal questions that aren't covered by the Constitution.

At the moment, lawyers at Facebook and Google and Microsoft have more power over the future of privacy and free expression than any king or president or Supreme Court justice. And we can't rely simply on judges enforcing the existing Constitution to protect the values that the framers took for granted.

"It's not clear [in this scenario] that Facebook would be regulated by the Constitution," he says. "After all, Facebook is a private actor, the Constitution and the Fourth Amendment only prohibits unreasonable searches and seizures committed by government actors. So a court or Facebook's lawyers might say, '... The Constitution has nothing to say ... and there's nothing anyone can do about it except not go outside because Facebook is unregulated.' I think that helps crystallize the fact that at the moment, lawyers at Facebook and Google and Microsoft have more power over the future of privacy and free expression than any king or president or Supreme Court justice. And we can't rely simply on judges enforcing the existing Constitution to protect the values that the framers took for granted."

Rosen points to Nicole Wong, who until recently was the deputy general counsel for Google. She was known inside the organization as "the decider," because she decided what videos and links stayed up on Google and YouTube.

"Nicole Wong was the one woken up by the Turkish government, for example, who were upset because Greek football fans were posting videos on YouTube saying ... the founder of modern Turkey was gay [and it is illegal in Turkey to insult the modern founder of Turkey]," says Rosen. "So Wong, in the middle of the night, has to decide, 'Is this a clear violation of Turkish law?' on which case it comes down, [or] is it an edge case and should be protected as free speech? In the end, she decided to block access to certain videos through Turkish IP addresses. ... So Nicole Wong concretely dramatizes that lawyers at Facebook and Google have more power than a Supreme Court justice."

Google has also been under pressure from the U.S. government to remove terrorist videos from YouTube.

"They refused to remove all the videos because they said they were protected speech," Rosen says. "... More recently, Twitter was pressured by [Sen. Joseph] Lieberman to remove pro-Taliban tweets. And Twitter's even more pro-free-speech than Google — it doesn't have a terrorism exception; it will only remove content that is illegal or promotes violence. And since they concluded that these tweets were pro-Taliban newsfeeds that didn't promote imminent violence, they refused to remove them."

Jeffrey Rosen is a frequent contributor to The New York Times Magazine and The New Republic. He is also a nonresident senior fellow at the Brookings Institution, where he writes about technology and the future of democracy.