Accessibility links
Hearing May Lead To More Freedom For Hinckley The man who shot President Reagan in 1981 has gradually been winning more liberties after being confined to a mental institution for decades. On Wednesday, a judge will begin to consider whether he deserves more privileges that could pave the way for him to live in the community. 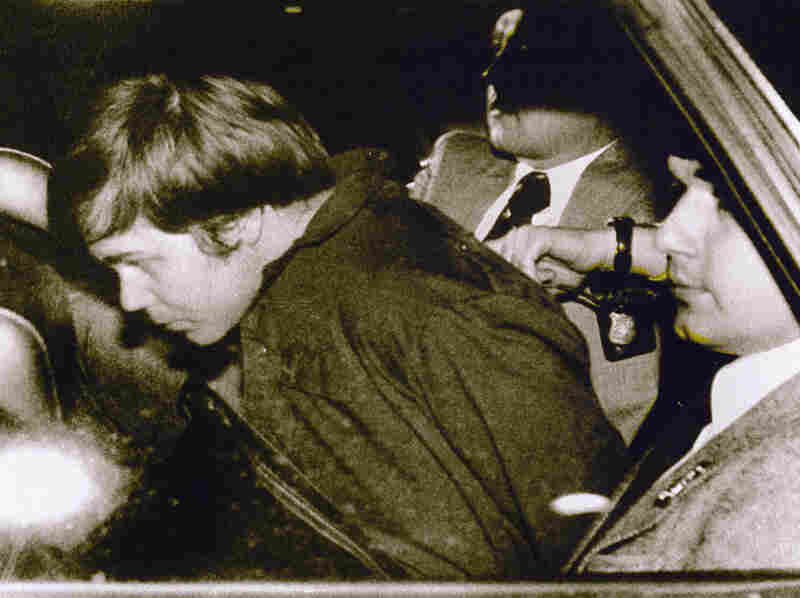 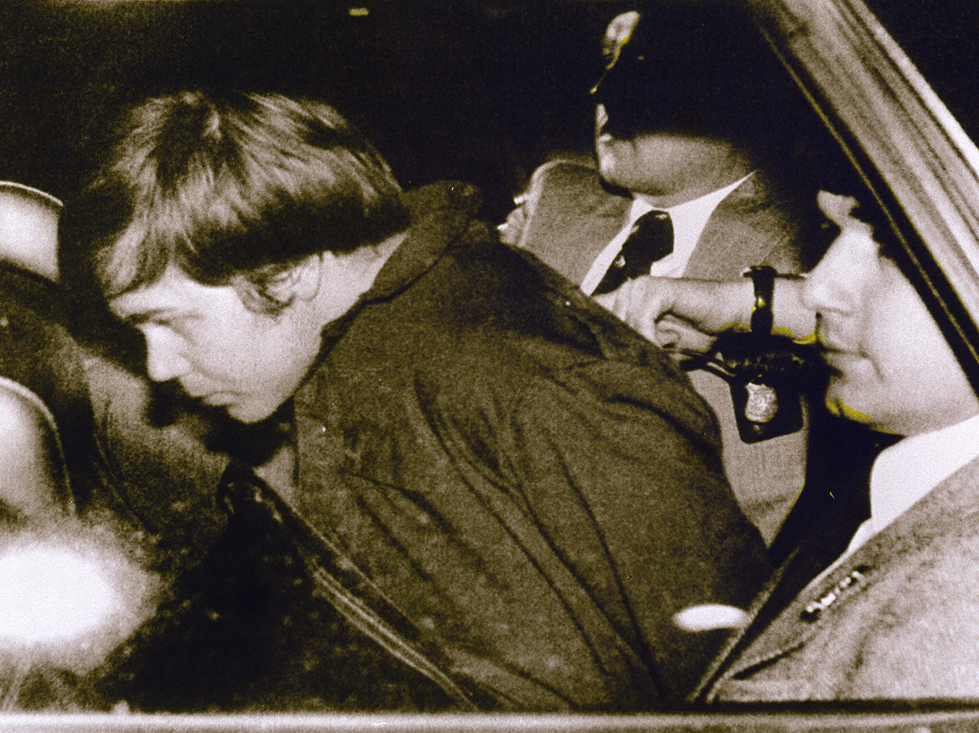 John Hinckley Jr. is escorted by police in Washington, D.C., on March 30, 1981, following his arrest after shooting and seriously wounding then-President Ronald Reagan.

More than 30 years ago, on March 30, 1981, John Hinckley shot President Reagan and three other people outside a Washington hotel. A jury found him not guilty by reason of insanity, and authorities sent him to a mental institution.

Hinckley mostly faded from the public imagination. But he could be about to draw attention all over again. Over the years, a judge has gradually allowed Hinckley to visit his family and get a driver's license. On Wednesday, lawyers for Hinckley and the Justice Department will appear in a federal courthouse in Washington, D.C. This time, they'll fight over whether he deserves more privileges that could pave the way for him to live in the community.

A proposal under consideration by U.S. District Judge Paul Friedman would let Hinckley leave the hospital for as long as 24 days at a stretch, and eventually allow him to live full time with his mother in Williamsburg, Va., under some monitoring.

Back in 1982, lawyers for Hinckley convinced a jury he was not guilty because he was acting in the throes of mental illness, a dangerous obsession with the actress Jodie Foster, whom he was allegedly trying to impress.

But the law that allows the government to hold Hinckley is designed to evolve along with the medical condition of the defendant.

"The progression that is envisioned by the statute is that someone who's mentally ill and found not guilty by reason of insanity can be put into a mental institution and then can gradually be re-incorporated into the community," says Thomas Zeno, a former prosecutor who worked on the Hinckley case. Zeno is now at the law firm Squire Sanders & Dempsey in Washington, D.C.

When he worked in the government, Zeno spent years fighting Hinckley's attempts at freedom. He's raised questions about Hinckley's relationships with women he met at the hospital — and whether Hinckley is telling his doctors the truth about what's going on in his head.

I believe that anyone who tries to nullify a presidential election with a bullet forfeits their right to walk around free in society.

"The crucial thing is: What's he thinking about these women, what might his motivations be, and is he being honest?" Zeno asks.

During the court hearing, which could last through next week, psychiatrists working for Hinckley and the Justice Department will offer conflicting testimony about whether he still represents a threat to the community. Both sides also say they may call Secret Service agents who have been watching Hinckley to testify.

Hinckley's lawyer, Barry Wm. Levine, didn't return calls. But he's said prosecutors have "no evidence of Hinckley being dangerous." And a review board at the mental institution agrees.

For the past couple of years, Hinckley has been able to leave the hospital for as long as 10 days — so long as he is with a family member. Just in case, the judge has required Hinckley to carry a GPS phone, keep taking his medicine and to call the hospital once a day.

Doctors say nothing bad has happened. Hinckley's gone out to eat and has shopped at big-box stores and for pet supplies.

That bothers Joe diGenova. He was the U.S. attorney when Hinckley began to intensify his efforts to leave the mental institution.

"I believe that anyone who tries to nullify a presidential election with a bullet forfeits their right to walk around free in society," diGenova says.

The record in other cases is mixed. Arthur Bremer, who shot candidate George Wallace on the campaign trail in 1972, got out of prison after serving 35 years. But Sirhan Sirhan, the man convicted of killing presidential candidate Robert Kennedy, has been denied parole.

If Hinckley does win the right to move freely, diGenova says, the Secret Service undoubtedly will have to devote time and money to monitoring him when, he says, agents should be concentrating on the current president.