Accessibility links
In Texas, Keeping Kids In School And Out Of Court Instead of being sent to the principal's office for things like truancy or dress code violations, young people in Texas are "ticketed" by school police and sent to court with misdemeanor charges. Some schools are changing their disciplinary policies to keep students from dropping out.

The sort of offenses that might land a student in the principal's office in other states often send kids in Texas to court with misdemeanor charges. Some schools have started rethinking the way they punish students for bad behavior after watching many of them drop out or land in prison because of tough disciplinary policies.

In a downtown Houston municipal court, Judge David Fraga has presided over thousands of cases involving students "ticketed" by school police. His docket is still relatively small at the moment, with only 45 to 65 cases per night.

"I suspect probably when school is in full bloom, probably we'll have between 125 [and] 150," Fraga says. 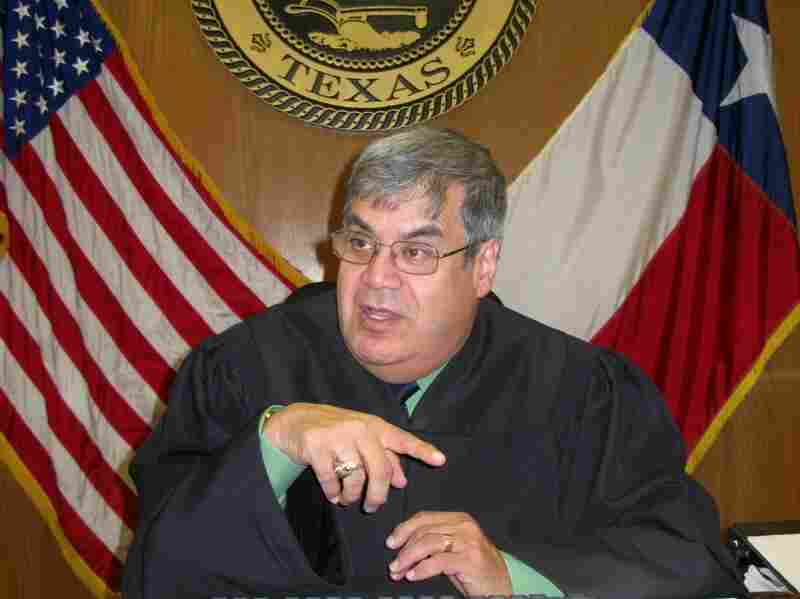 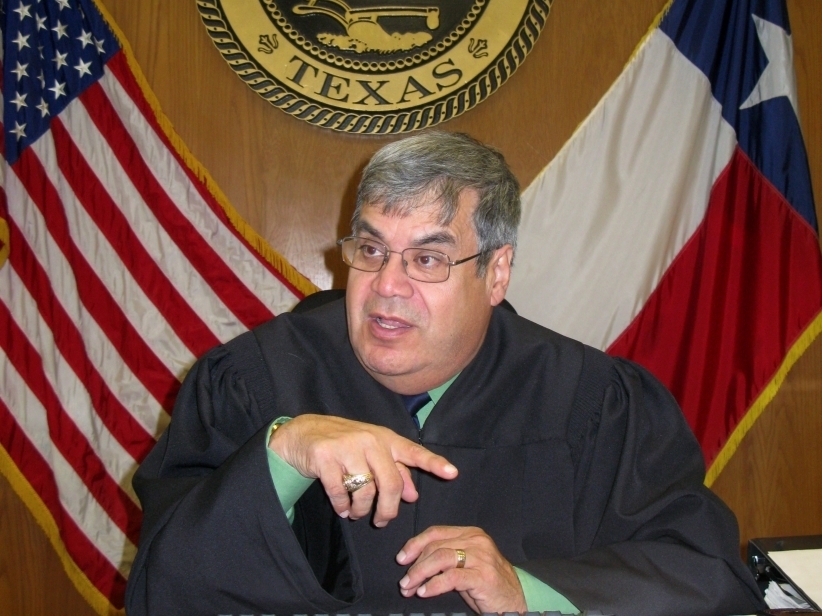 In a Houston municipal court, Judge David Fraga presides over hundreds of cases a day involving students "ticketed" by school police for things like truancy or using profanity at school.

He isn't referring to cases involving adults ticketed for driving under the influence or suspended licenses, but rather young people ticketed by school police for fighting, disrupting class, or using profanity — all Class C misdemeanors. In other words, these infractions are the equivalent of crimes like insurance fraud and criminal mischief.

Erlin Zavala is making his second court appearance for skipping school. The gangly 13-year-old has jet black hair combed back with gel. He listens quietly to questions Fraga asks him, with his tired-looking mom at his side.

Fraga is a true believer in second chances. He won't decide Erlin's fate today, but he usually recommends community service just to keep kids' mistakes from becoming part of their permanent record.

"I mean you gotta show these young people that there's hope," Fraga says.

Winding up in a courtroom for skipping school might seem a bit excessive, but beginning in the mid 1990s, most states adopted rigid, "zero tolerance" policies in response to school shootings and gang violence. Schools in Texas went further by ticketing things like truancy, tardiness, dress code violations and the use of profanity at school.

• Nearly 6 in 10 public school students studied in Texas were suspended or expelled at least once between their seventh- and 12th-grade school years.

• About 59 percent of those students disciplined 11 times or more did not graduate from high school during the study period.

"What we are seeing now are hundreds of thousands of Class C misdemeanor tickets being issued to juveniles in Texas [who are] being processed for those tickets through what is really an adult criminal justice court system," she says.

This summer, an exhaustive study by the Council of State Governments found that by 12th grade, more than half of all 14- to 15-year-olds in Texas are ticketed, expelled or suspended at least once. After they're ticketed, sent to court and fined hundreds of dollars, students aren't always allowed to go back to their home school. Instead, they're sent to an alternative school, a holding pen of sorts where kids are supposed to "learn their lesson."

Thomesha Turner, 18, is a senior in the Waco independent school district. She was a good student and had never been in trouble before a verbal altercation with a teacher.

She says the teacher pointed a finger in her face and called her a little girl.

"I told her to get out of my face 'cause I wasn't a little girl, and I cussed [her] out. I said, Miss, 'You get out of my face or I'll beat your bitch ass up.' There's a different way I could've handled it," Turner says, "but I didn't handle it in a more mature way."

Danielle Delgado, 12, is a diminutive girl with a hair-trigger temper. She's at the Waco Alternative School Campus for fighting with another student.

Delgado recalls, "She told me I have some big feet. I said you got a big face. She swung but she missed and so that's when we started fighting in the hallway. And security got me and then security took her to the vice principal's office."

Delgado has been suspended three times. The first time she was only 8 and in third grade.

At Waco's only alternative school, absolute obedience and compliance with the rules is mandatory. School uniforms are a must and students can't speak in the hallways. Seventy students are referred to this school every day, and they're all expected to change for the better.

But the more these kids open up, the more it becomes apparent that their behavior has a lot to do with the turmoil in their young lives.

Karen McPhetridge, 14, says she's been in foster care since she was 3.

"I got back with my mom like three years ago and then my dad abandoned me," McPhetridge says, "I've been angry with him, and I've been angry with my sister, because as soon as she graduated she became a stripper and now she's like all strung out on drugs."

McPhetridge was expelled for smoking marijuana on school grounds. Kids like her have gotten in to trouble, but until now, schools have had no way to deal with the root causes of their bad behavior. Neglect, abuse and family problems are issues that students like Saul Cornejo, 16, bring to school every day.

"Teachers at school, they don't understand it," he says. "They just dismiss you, put you off instead of like, really trying to get to the real problem which, most of the time originates at home and stuff."

Cornejo has been suspended several times for fighting. He lives with his older brother but is pretty much on his own. His principal says he's really bright, but Cornejo is facing felony charges for burglary and won't be allowed to return to his home school. 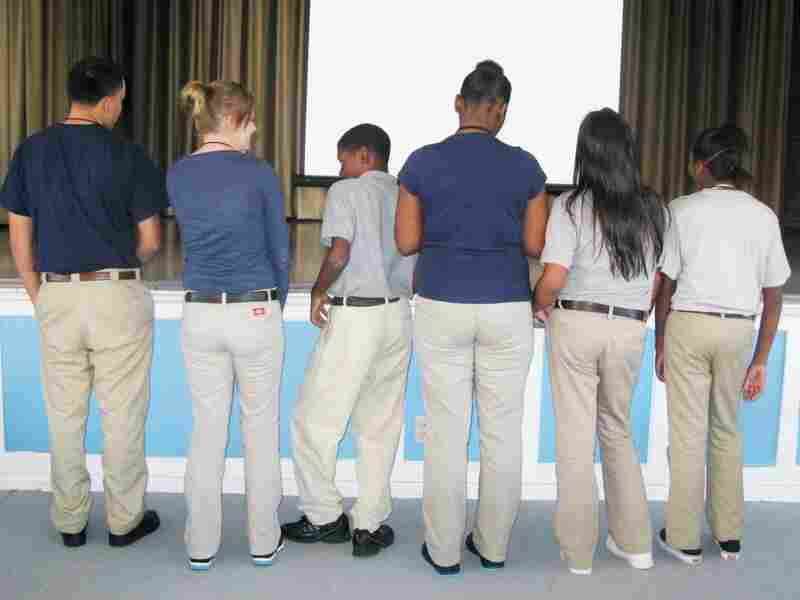 Seventy students a day are sent to the Waco Alternative School Campus, after being "ticketed" for bad behavior in municipal court. Marisa Peñaloza /NPR hide caption 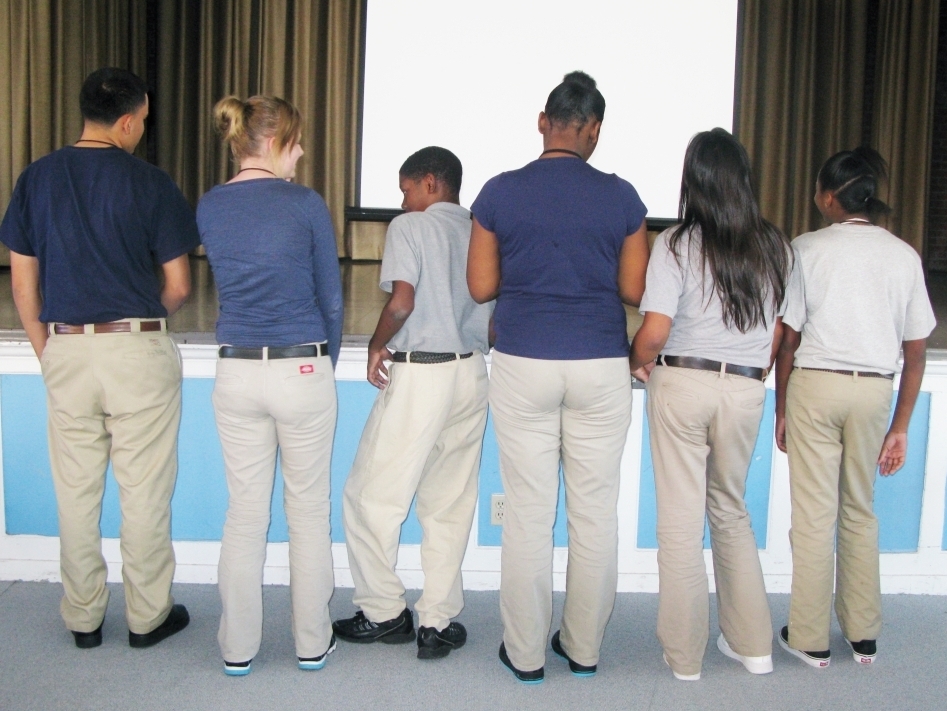 Seventy students a day are sent to the Waco Alternative School Campus, after being "ticketed" for bad behavior in municipal court.

Schools give up on kids like Cornejo all too often, says John Hudson, the director of attendance, truancy and dropout recovery in the Waco alternative school.

Hudson says, "When you look at the numbers of times students are disciplined in school, suspended, separated from school, placed in disciplinary alternative education placement, the unintended consequence is that their education suffers to the point where it puts them farther and farther away from graduating."

For the past two years, Waco had the second-highest suspension and expulsion rates in Texas. Today, administrators and teachers are trying to turn that around by being less punitive. The district has even started a tiny pilot program that teaches parents how to help their kids control their behavior.

For Delgado, Turner and McPhetridge it may be too late. They say they feel labeled and stigmatized.

McPhetridge says, "This will go on my record and it worries me, like what kind of colleges would want to accept someone who was put in alternative school."

Turner has similar concerns. "When they see alternative on your background, they look at you different because they're like, alternative? That's for bad kids."

Already a mother of two with another child on the way, Turner is determined to graduate next spring. Delgado isn't so sure.

The Waco schools superintendent, Bonnie Cain, took over two years ago. She says a few teachers and administrators may still think some kids will always be trouble, but from now on, the district's disciplinary policy will assume that deep down, even the toughest students can change and are worth rescuing.

"Nobody wakes up in the morning and says, 'You know what? I'm going to make everybody mad today. I'm going to get expelled,' " Cain says. "We need to take that child where they are and work with them to get them on the right track, because if we don't do it, who will?"

With more state lawmakers now supporting this view, school districts in Texas are rethinking their disciplinary policies. Researchers hope Texas will be a model for other states to do the same.