Accessibility links
A Debate Over Who Regulates Gas 'Fracking' In Pa. As the natural gas industry booms in Pennsylvania, drillers are encountering a hodgepodge of local rules on hydraulic fracturing, or "fracking." State lawmakers are considering changes that would limit the way a local community regulates what happens in its own backyard. 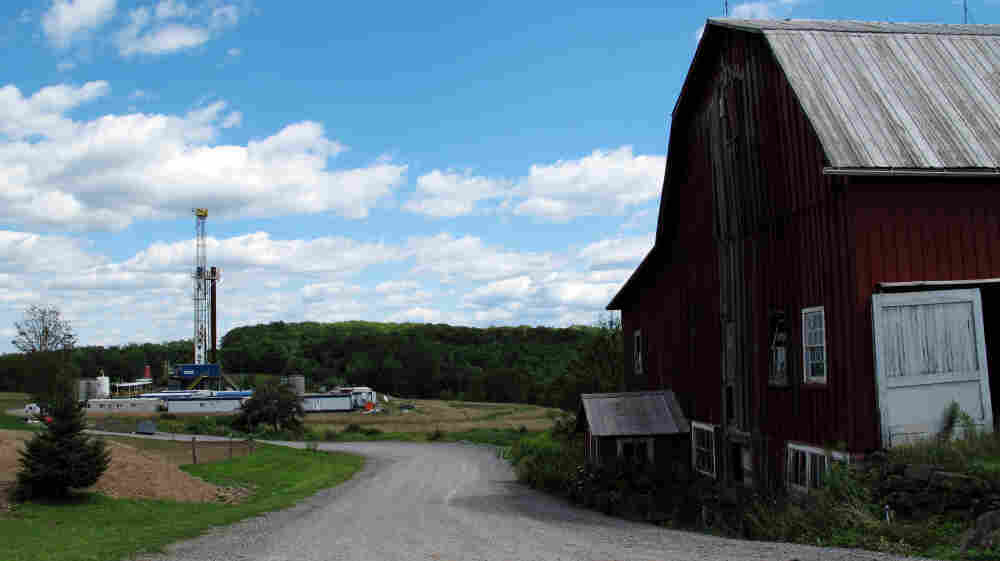 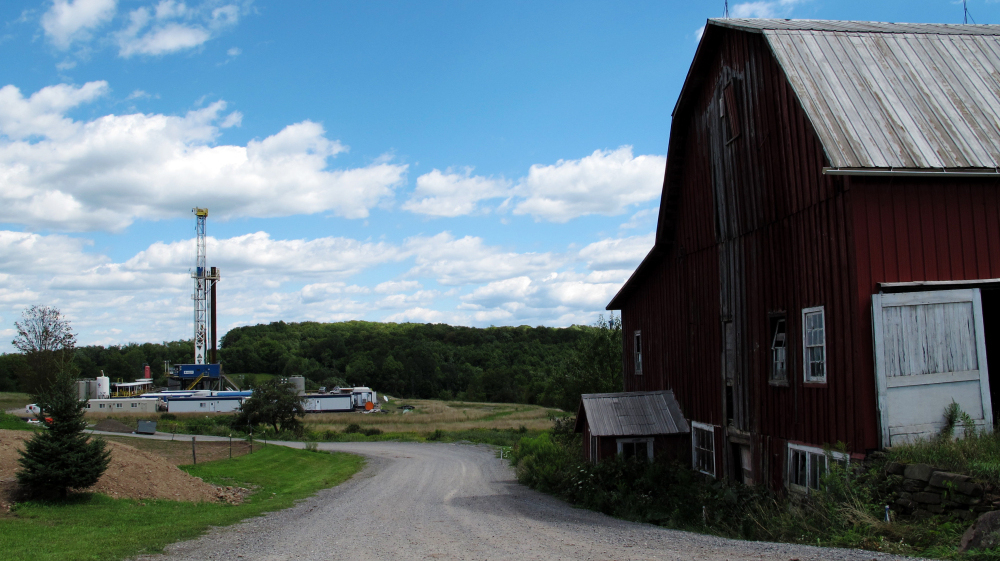 A drilling rig looms behind a barn in Tioga County, Pa.

A new Pennsylvania law could curb municipalities' ability to zone and regulate hydraulic fracturing — "fracking." And that raises questions about how much say a local government should have over what goes on within its borders.

State lawmakers are grappling with how to update the commonwealth's decades-old Oil and Gas Act to catch up with a natural gas drilling boom.

Right now, local regulations on where drilling rigs can go, how loudly they operate and how far they need to be from buildings differ from community to community. Pennsylvania lawmakers who support the natural gas drilling industry are trying to standardize the rules across the state.

"It can be like the equivalent of needing to get a new driver's license for every state that you go through when you're traveling," says Kathryn Klaber, head of the Marcellus Shale Coalition, which represents drillers in Pennsylvania.

And some places, such as Pittsburgh, have passed outright bans on fracking. So have several New York communities, in anticipation of drilling in the Empire State.

A measure now before Pennsylvania lawmakers would assign an "impact" fee to each Marcellus Shale well.

It would also set statewide guidelines for what local governments can and can't regulate.

So if a municipality went beyond the new guidelines, the state attorney general would have the power to sue the local government and ban it from receiving revenue from the impact fee charged on each well.

"The political action donors that have given millions of dollars to this governor and to those in political leadership in the House and the Senate ... could not have asked for a better piece of legislation," Ferlo says.

Actually, they could have.

An earlier version of the bill backed by Corbett would have nullified all local regulation of natural gas drilling. Instead, the latest version sets strict limits on regulation. For example, townships wouldn't be allowed to ban drilling in residential areas.

The head of Pennsylvania's township supervisors association called the earlier outright ban "oppressive" to local government. But he says his group can live with the new language.

Not all local officials feel that way.

Brian Coppola sits on the Board of Supervisors in Robinson Township, a community with more than 40 Marcellus Shale wells. He calls state-level restrictions on what local governments can regulate a "disaster," and he thinks the latest bill is just as bad as the earlier across-the-board regulation ban.

"I would say that anything that allows a heavy-industrial use to go into our residential areas is pre-emption," he said. "Because that really is the foundation of zoning."

But pro-drilling groups say residential drilling bans actually hamper private property owners. "If I live in a residential area, don't I have a right to lease my natural gas?" she said.

Pennsylvania's neighbor, Ohio, sits on top of shale deposits, too. But the Buckeye State is ahead of Pennsylvania on this issue. It already enforces across-the-board zoning consistency.

Klaber of the Marcellus Shale Coalition says if a new law doesn't pass, Pennsylvania drillers will go to Ohio.

Pennsylvania's House and Senate have passed two different versions of the bill.

The differences will be hashed out over the coming weeks, with the goal of signing a bill into law by the end of the year.

Scott Detrow is a Pennsylvania-based reporter for NPR's StateImpact network, which focuses on government reporting in the states. Read More About It

StateImpact: Inside PA's Dueling Impact Fees
StateImpact Pennsylvania: Energy and the Economy in the Keystone State