Accessibility links
CT Scans Re-Create 307-Year-Old Violin It all started with a gunshot — and a love for an original Stradivari Betts violin. 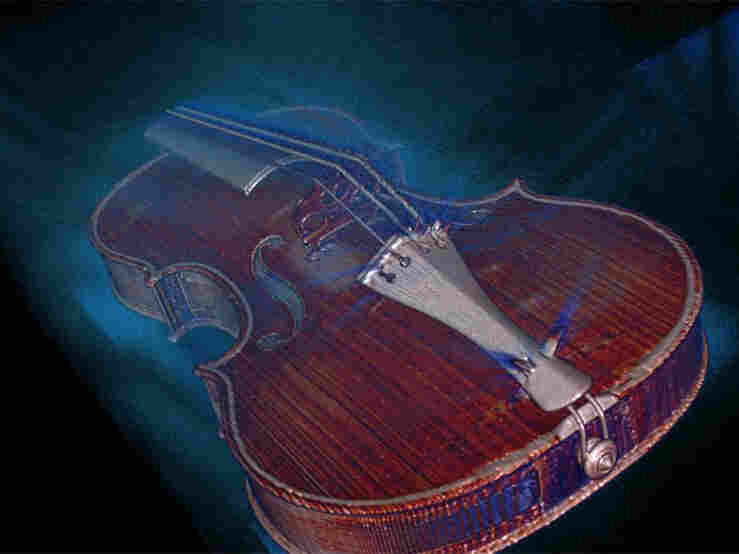 This image, derived from the OsiriX DICOM image viewer, is a single frame from a 3-D volume rendered movie of the 1704 Stradivari Betts violin. Courtesy of RSNA.org hide caption 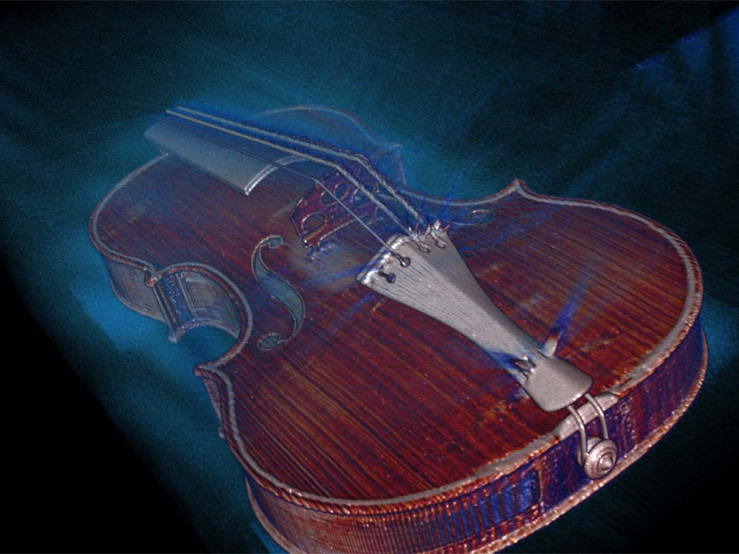 This image, derived from the OsiriX DICOM image viewer, is a single frame from a 3-D volume rendered movie of the 1704 Stradivari Betts violin.

Several years ago, Dr. Steven Sirr decided to marry his two passions: CT scans and violins. But not just any violin — a 307-year-old Stradivarius, one of the most prized instruments in the world. Sirr has collaborated with a few violin makers to build their own Stradivarius using the scans.

It all started with a gunshot.

"I was supervising three residents in the county hospital where I worked in Minneapolis, Minn., and it was a very boring weekend, so I brought my violin in to practice," Sirr says in an interview with NPR's Guy Raz. "It was a gunshot victim that came into the CT scanner. One of the residents banged on the door and wanted me to look at the CT scan, and I had carried my violin down to the scanner and put it on the table next to the scanner. So when the patient was CT-scanned and went to surgery, I turned around, saw my violin and I scanned it."

Sirr says he "was amazed at the anatomy." But eventually, he wanted to scan a Stradivarius violin, an instrument worth millions of dollars, and persuaded the officials at the Library of Congress to allow him to use theirs. It even had the original label from Antonio Stradivari inside the body.

CT scan of the front of the original Stradivari Betts violin. Courtesy of RSNA.org hide caption

"The library was involved in a two-week project in Oberlin, Ohio, this past summer, and at that time we were able to CT-scan the original Betts violin that was made in 1704," Sirr says.

After the violin had been scanned, Sirr took the files to violin maker Steve Rossow, who made a CNC machine built to carve violins.

"I took the files directly from the CT scanner, put it into a form that his computer could read," Sirr says. "Then, with [Rossow's] machine, he was able to actually carve out in extremely high accuracy the front and back plate of the Stradivarius violin and the sidepieces, and the neck and the scroll of the 1704 Stradivarius."

Of course, certain aspects of the Stradivarius can't be captured, no matter how many scans you take.

"Every violin is completely different based on the wood quality," Sirr says. "We try to match the density of the wood from the CT scan. We look at the grain pattern from the original and try to get a similar vein pattern."

Sirr says he'd like to one day put this technology and these violins on the market, "especially since the latest Strad that was sold this past summer was sold for almost $16 million, which is well out of the range of any modern living violin maker. We think they sound just excellent. We had the original violin for two weeks in Oberlin, Ohio, so we know what the original sounds like, also."