Accessibility links
U.S. Weighs Sanctions Targeting Iran's Central Bank Iran may soon face economic measures tougher than anything it has encountered before: The U.S. Congress is considering sanctions against the central bank of Iran, with the likely effect of limiting Iran's oil exports. But some analysts say the move could lead to a dangerous spike in oil prices. 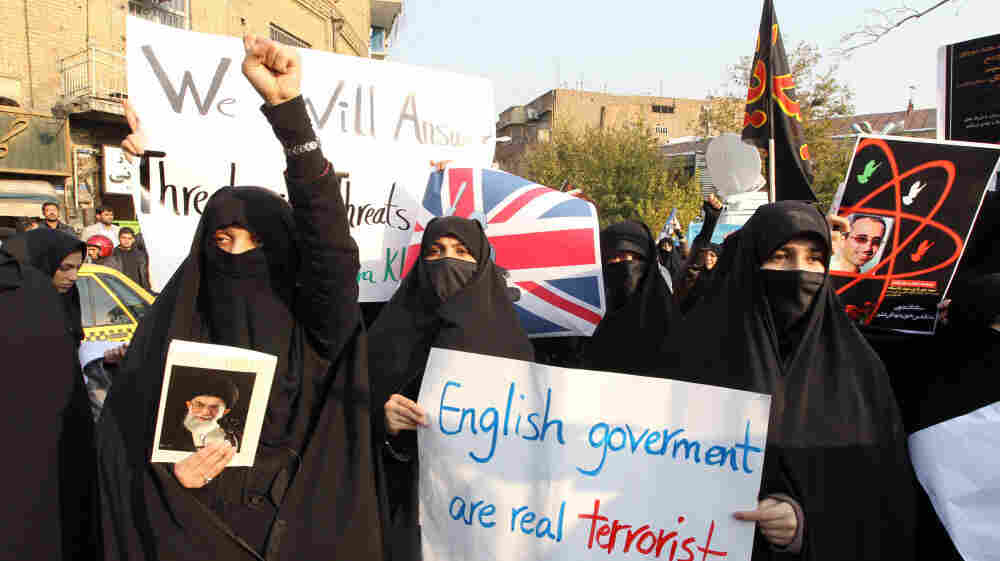 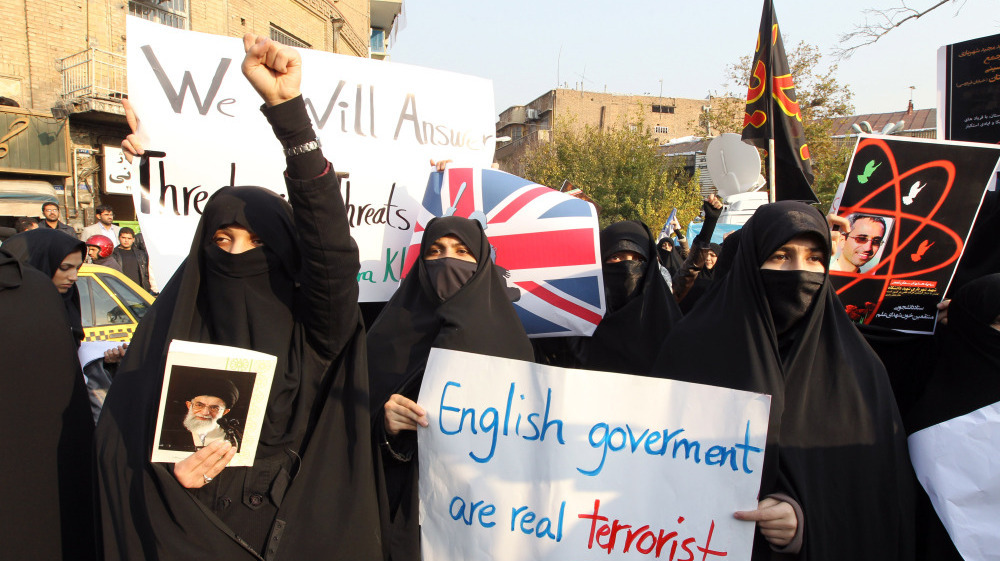 Iranians shout slogans during a demonstration outside the British Embassy in Tehran, Nov. 29. New British sanctions against Iran's central bank sparked the recent protests. Now, the U.S. is considering even tougher measures.

Iran has been dealing with economic sanctions for years, but the country could soon face measures tougher than anything it has encountered before: Legislation moving through the U.S. Congress would target the central bank of Iran, with the likely effect of severely limiting Iran's oil exports.

Such sanctions would almost certainly damage Iran's economy. The challenge would be to make sure other countries are not hurt as well, given the fragile state of the global economy and the tight global oil market.

My guess is [sanctioning the central bank] will make it very difficult for Iran to export its petroleum. How will it get paid?

The proposals have strong support from both Democrats and Republicans in the U.S., including the Republican presidential candidates, most of whom supported the idea during last week's foreign policy debate.

"When you sanction the Iranian central bank, that will shut down that economy," said Texas Gov. Rick Perry. "At that particular point in time, they truly have to deal with the United States."

Under legislation pending in Congress, U.S. banks would generally be banned from doing business with any financial institution that in turn does significant business with the central bank of Iran. Foreign companies that buy Iranian oil and pay for it through Iran's central bank would have to halt those transactions or lose the chance to do business in the U.S.

The effect on Iran's economy could be devastating. Right now, more than half of Iran's government spending is covered by revenue from oil exports, and the revenue is funneled through the country's central bank.

"My guess is [sanctioning the central bank] will make it very difficult for Iran to export its petroleum," says Rep. Howard Berman, a Democrat from California. "How will it get paid?"

The global economy, however, is interconnected. Limiting Iran's oil exports could shrink the global oil supply. If supply goes down and demand is unchanged, the price of oil globally will go up.

"It's a pretty dangerous game," says Jamie Webster, senior manager with PFC Energy consulting firm. "It's a very tight oil market. Whether we want to admit it or not, we need those barrels from Iran. Anything that would actually reduce the ability of Iranian crude to make [its] way into markets has the real ability to press up the price."

With the global economy teetering on the brink, a spike in oil prices right now could push at least the U.S. and European economies back into recession. 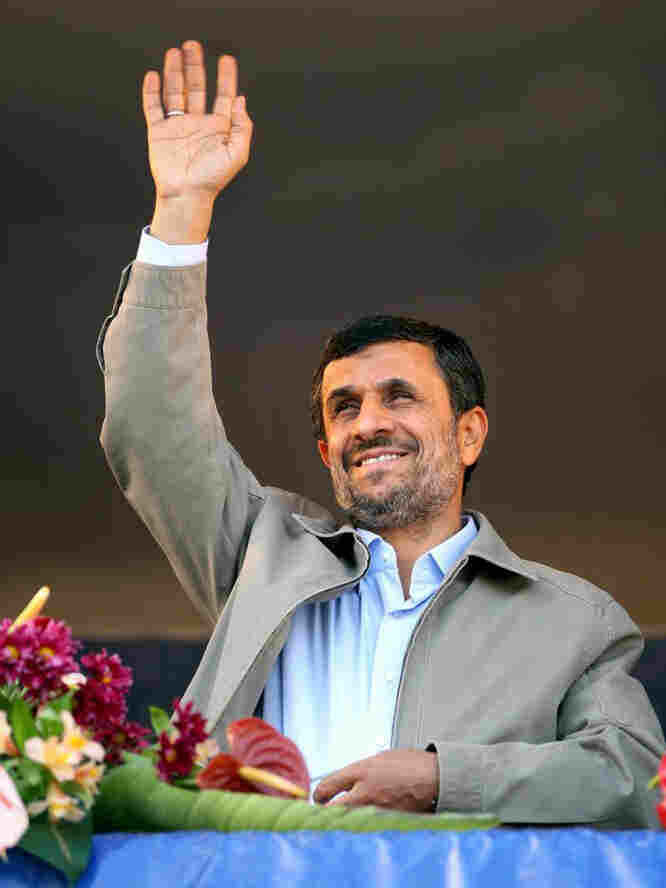 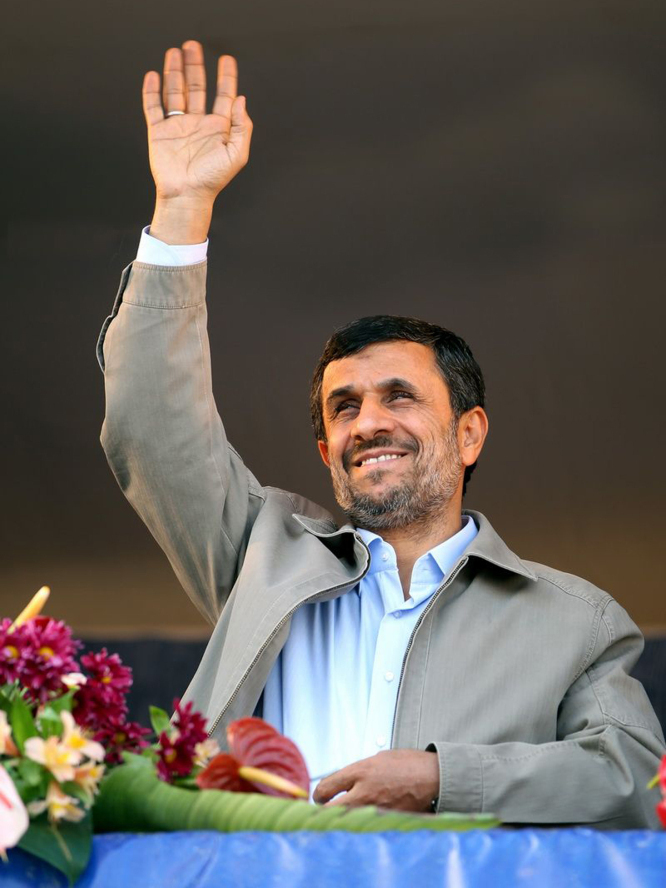 The Obama administration and Congress therefore have to choose the lesser of evils, between the higher oil prices that could result from sanctioning the Iranian central bank and the risk that not tightening sanctions would make it easier for Iran to move ahead in its nuclear program.

There are two important concerns, says Berman, the California congressman and a co-sponsor of the legislation targeting the central bank of Iran. The first is "the tremendous blow to world security of Iran having a nuclear weapons capability." And the second would be "a tremendous concern about a double-dip recession and a global economic crisis."

Nevertheless, Berman thinks the concerns about losing Iran's contribution to the global oil supply are overblown.

"Iran exports about 2.5 to 3 million barrels of crude oil a day," he points out. "Saudi Arabia alone could quite quickly replace that amount of crude oil and avoid that disruption in global oil markets in terms of price and supply."

Saudi Arabia's excess oil production capacity has always acted as insurance for the global oil market: If a crisis somewhere disrupts oil production, the Saudis can make up for the lost supply. Michael Wittner, global director of oil research for the French investment bank Societe Generale, says the Saudis could similarly make up for lost supplies from Iran.

"It's a similar quality crude," Wittner says, "and it's coming from the same part of the world, so shipping times are comparable."

Wittner cautions, however, that tapping into excess Saudi capacity would leave less spare capacity, at a time of continued unrest in the Middle East and North Africa.

"It would clearly be bullish for oil prices," Wittner says, meaning oil prices would very likely rise even if Saudi oil replaced the Iranian crude.

Another idea would be to allow some or all Iranian oil to remain in the global market, but to control it so as to limit the revenue Iran could earn from oil sales. This might be achieved if the United States turned a blind eye, for example, to China's purchase of Iran's oil output, while other countries were punished. In that case, China could force Iran to sell its oil at a lower price.

"Our modeling shows that if only China was purchasing Iranian oil, they would be able to drive for discounts of about 39 percent on every barrel of Iranian oil," says Mark Dubowitz, executive director of Foundation for the Defense of Democracies, a national security think tank. "You would essentially shrink oil revenue to Iran by about 39 percent without impacting global supply, if China was left as the sole buyer of Iranian oil."

It is not clear, however, that China would want to drop its other oil suppliers and go completely with Iranian production, even at a lower price.

Given the concerns about its economic impact, the Obama administration has been slow to endorse the sanctioning of Iran's central bank. But Berman is predicting Congress will move speedily ahead with this new approach.

"Both parties, both houses [will move the legislation]," Berman says, "and I think with enough flexibility to allow the administration to carry this agenda to the [U.N.] Security Council and in bilateral relationships with other countries to get them onboard as well."

Flexibility may be the key. Under an emerging compromise, Congress would allow the administration to implement sanctions on Iran's central bank gradually, with careful attention to any impact they would have on the global economy.