Accessibility links
Lack Of AIDS Funding Worries Africa The world's largest supporter of AIDS programs says it is well short of its fundraising goals because of the global financial crisis. The announcement by the Global Fund to Fight AIDS, Tuberculosis and Malaria has raised concern about the future for AIDS patients on World AIDS Day. 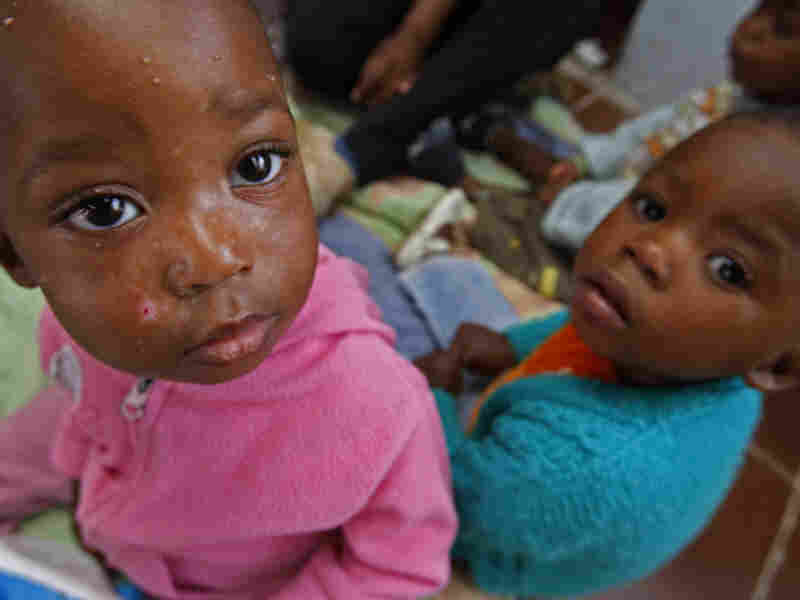 Orphaned children are cared for at the Baphumelele Center, which assists people affected by AIDS in South Africa. The Global Fund is short on AIDS funding, preventing it from funding new programs. Schalk van Zuydam/AP hide caption 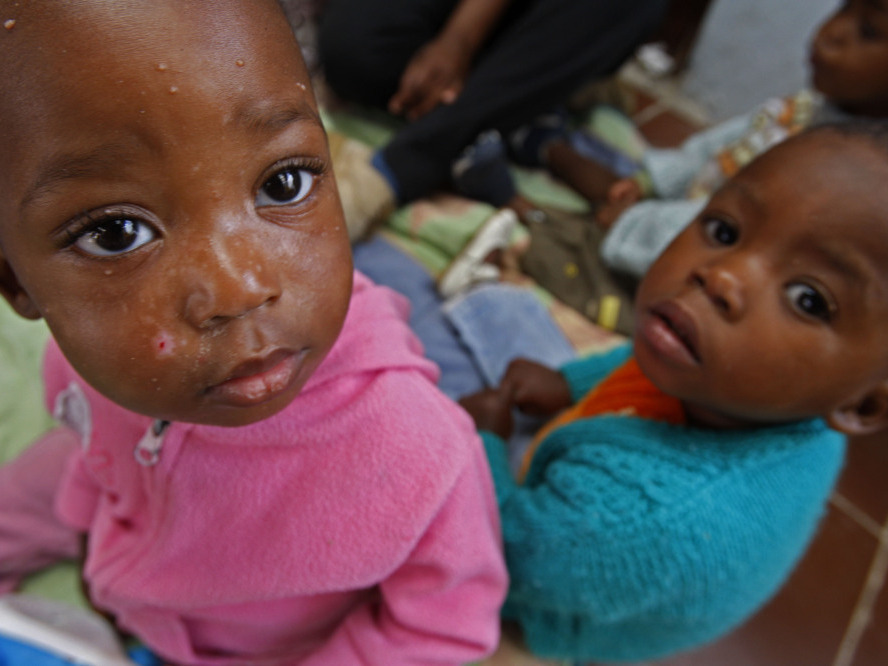 Orphaned children are cared for at the Baphumelele Center, which assists people affected by AIDS in South Africa. The Global Fund is short on AIDS funding, preventing it from funding new programs.

The world's largest supporter of AIDS programs has made an ominous announcement: Because of the global financial crisis, it is well short of its fundraising goals.

The Global Fund to Fight AIDS, Tuberculosis and Malaria pays for more than half of the world's HIV medicine, and supports hundreds of education and advocacy programs worldwide. With World AIDS Day on Thursday, many are worried about what that means for the future of the war on AIDS.

Inside the Ubuntu HIV clinic in South Africa, dozens of people sit on wooden benches. Some wear masks over their mouths, as children chase each other through the aisles. They're here to collect their monthly supplies of anti-retroviral drugs — the medicine that allows HIV-positive people to stay healthy.

South Africa has more HIV-positive people than any other country in the world. More than 6,000 people collect their medicine at this clinic in Khayelitsha, a sprawling township on the outskirts of Cape Town.

Nompumelelo Montangana, the operational manager, says the clinic has made huge strides in the fight against HIV. It has greatly increased the number of patients it treats and has raised community awareness of the disease.

However, she says, the Global Fund's financial shortfall has her worried.

"If the funding is not there, then that means what we have worked [on] over the past 10 years ... will be a waste," Montangana says.

The Global Fund hopes to distribute $20 billion in 2012, primarily to programs in sub-Saharan Africa. Two-thirds of the world's HIV-positive people live there.

So far, it has raised just half of that amount.

"Basically, we are predicting the funding will remain at a similar level, hopefully with some increase," Benn says, "but it is not currently sufficient to call for a full, new round of funding that would allow countries to scale up their current programs."

That means people who now have access to anti-retroviral drugs won't be affected much. Still, roughly half the world's HIV-positive people live in areas with limited or no access to those drugs, and their situation probably won't improve.

Education and advocacy groups are also under threat. The Treatment Action Campaign, one of South Africa's most influential AIDS organizations, has said it will be forced to close its doors in January if Global Fund dollars aren't delivered as promised.

Dr. Eric Goemaere, the director of Doctors Without Borders for Southern Africa, warns that clinics in some countries could run out of anti-retroviral drugs — a situation he calls "stock-outs."

"Worst-case scenario is stock-outs, and people who are already on treatment will have to be stopped," he says. "Countries, like certainly Zimbabwe and Mozambique, and probably Malawi, will have extreme difficulties."

The Global Fund receives 95 percent of its income from governments, primarily in Europe and North America. Now, many of those governments are saying they can't pledge more money in the midst of the global financial crisis. Goemaere, however, says the problem is that there is not the same political will around AIDS that there was a decade ago.

"The real reason is that the political interest has definitely faded away," he says, "probably because it is not perceived as threatening as it was in that time, for the rich countries — for European and North American countries."

Despite the fears of AIDS advocates, the Global Fund says it can maintain support for current programs. South Africa, which has the largest economy in Africa and a government that is committed to fighting the disease, is unlikely to see its HIV clinics close. The same may not be true for many of its neighbors.