Accessibility links
Oil Boom Puts Strain On North Dakota Towns A discovery of at least 2 billion barrels of oil in the western part of the state has led to an oil boom. That means a low unemployment rate of 3.5 percent, but residents question the cost. "To expect a county of 20,000 people to overnight absorb another 20,000 people is ludicrous," one official says. 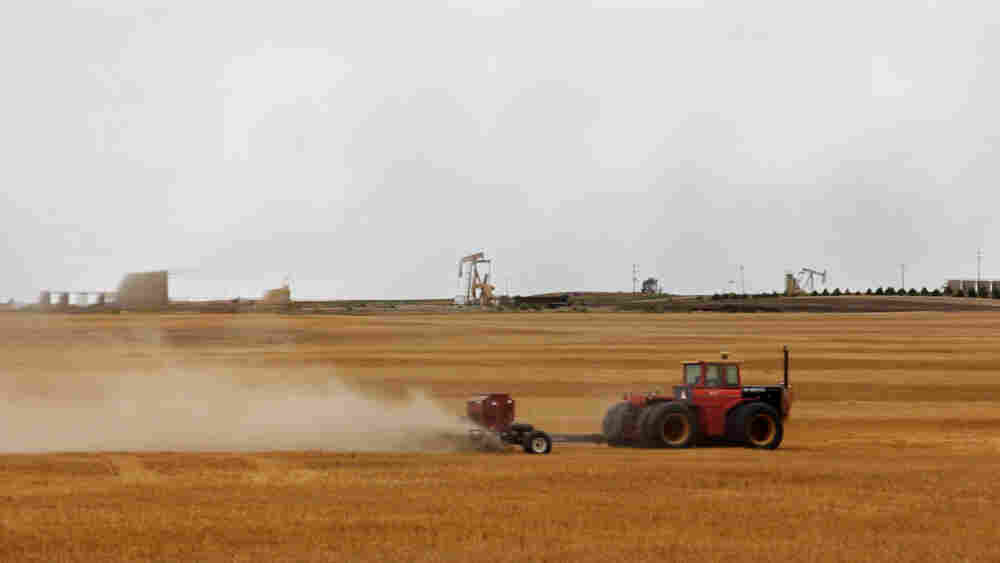 On the road from Williston to New Town, N.D., gleaming new pumps pull oil from freshly fracked wells. Some residents think it's possible for farming culture to co-exist with an oil boom, but they say the state needs to get a grip on the accompanying chaos. John McChesney for NPR hide caption

The tough economy has taken its toll on most states, putting budgets deep in the red and putting people out of work.

But North Dakota has a low 3.5 percent unemployment rate and a state budget with a billion dollar surplus. That's because of a major oil boom in the western part of the state, a discovery of at least 2 billion barrels to be gained by fracking — the controversial process of injecting fluid deep into underground rock formations to force the oil out.

The find could be the largest ever in the lower 48 states. It's expected to make North Dakota the third largest producer of oil after Alaska and Texas. But many residents of the oil boom region are not singing "Happy Days Are Here Again" — they're saying "enough."

Imagine you live in a small rural town worried for years about depopulation, and suddenly, overnight, the population doubles, and the newcomers are thousands of young men without families. Imagine that you live in a tiny town with one main street that doubles as a state highway.

That's the situation in New Town, N.D., population 1,500 — at least, it was a couple of years ago. Today it's anybody's guess how many people live here, and no one knows how many 18-wheelers roll through every day, either. They just know it never stops.

It seems that nearly every big tank truck in America is on the road here, making tens of thousands of trips a day hauling water, fracking fluid, wastewater and crude oil — and tearing up the roads.

"What we have now is the complete industrialization of western North Dakota. To expect a county of 20,000 people to overnight absorb another 20,000 people is ludicrous," says Dan Kalil, chairman of the Williams County Commission. I met Kalil in Williston, N.D., at the very eye of this hydrocarbon hurricane.

We are planning over the next two decades to drill and hydraulically fracture every square mile of that area.

The Bakken oil field is one of the biggest energy plays in American history. The formation is the size of West Virginia, covering one-third of North Dakota. There are 201 drilling rigs here punching holes in the earth, more than anywhere in the U.S. other than Texas.

Lynn Helms, the director of North Dakota's Department of Mineral Resources, is a slight man with a graying beard who obviously enjoys talking about the Bakken boom. He says he expects the rig count to reach 225 by year's end.

"Every one of those rigs has brought 120 jobs to western North Dakota," Helms says. "When you do the math, that's about 25,000 people, and there's another 10,000 people whose jobs are to lay the pipes to the producing wells, build the natural gas processing plants and all of that."

He adds that even though those figures sound large in a state with only 670,000 people, the work has only just begun.

"We are planning over the next two decades to drill and hydraulically fracture every square mile of that area," he says.

Some estimates predict that western North Dakota could have as many as 48,000 new wells. Given that drilling will go on here for the next two decades, according to Helms, many people are asking why the oil companies are in such a rush. We went out to where they're drilling to find out. 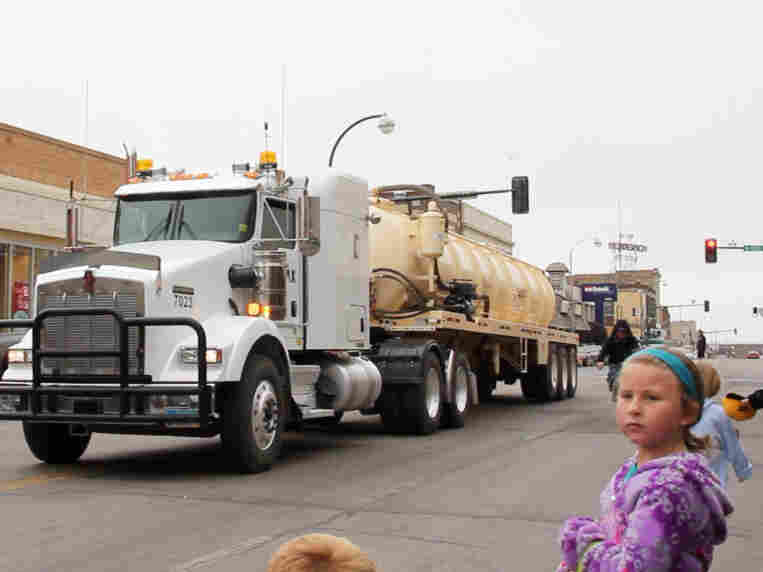 The oil industry stages events like this energy festival parade in downtown Williston in an effort to maintain good relations with the community. Industry rigs and trucks of every description roar by as drivers throw candy to the kids. John McChesney for NPR hide caption 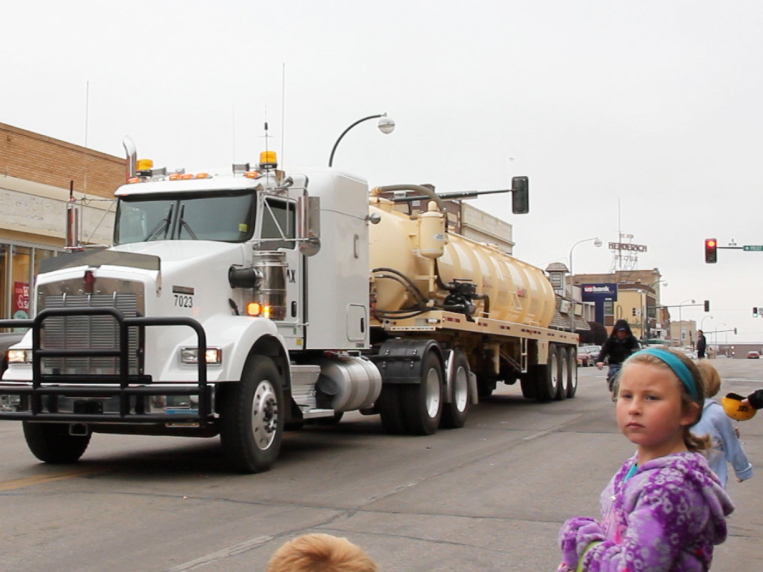 The oil industry stages events like this energy festival parade in downtown Williston in an effort to maintain good relations with the community. Industry rigs and trucks of every description roar by as drivers throw candy to the kids.

A Rush To Beat A Deadline

On a plateau overlooking Williston, lifelong local resident John Schmitz shows me a couple of towering drill rigs. Schmitz is a land man — a person who procures leases for the oil companies — and not surprisingly, he's a boom booster. He explains that the current drilling frenzy is all about money. Leases bought cheap several years ago are about to run out.

That's a tenfold price increase. But those leases don't run out if an oil company starts drilling — ergo, the current frenzy to punch hundreds of holes in the ground as fast as possible. I asked Williams County Commissioner Dan Kalil if there isn't a way to slow things down.

"That's the question I struggle with every night when I'm trying to sleep," Kalil says. "What can we do?"

He says only the state can slow it down, but the state has a strong incentive to keep things cracking.

It's never going to be the same in this country, and they're starting to realize that we had it kind of good.

"At 11.5 percent of every dollar per barrel of oil going to the state, the state is reaping the benefits of this boom. There's not much interest in slowing that down," Kalil says.

Meanwhile, the oil industry is trying to maintain good relations with the community, staging events like an energy festival parade in downtown Williston. Industry rigs and trucks of every description roar by as drivers throw candy to the kids.

Back in New Town at a gathering of a few local residents, we met rancher Donnie Nelson, who had just paid $7 for a gallon of milk, one example of price inflation here. He says patience here is wearing thin.

"Just about anybody I talk to that's a neighbor — and some of them are getting wealthy — are sick of it. It's never going to be the same in this country, and they're starting to realize that we had it kind of good, even though we weren't No. 1 in oil and we weren't the No. 1 state economically," Nelson says. "We had a good life up here."

Nelson and others here still think it's possible for the old farming and ranching culture to co-exist with oil, but they say the state needs to get a grip on the chaos.

John McChesney is director of the Rural West Initiative, part of the Bill Lane Center for the American West, which supports research, teaching and reporting about Western land and life in the United States, Canada and Mexico.