Accessibility links
How Europe's Troubles Could Become Ours, Too If Greece, Spain, Italy or other European governments were to suddenly default on their debts, European banks could find themselves holding worthless assets and becoming insolvent. That could lead to a global financial meltdown worse than the one in 2008. 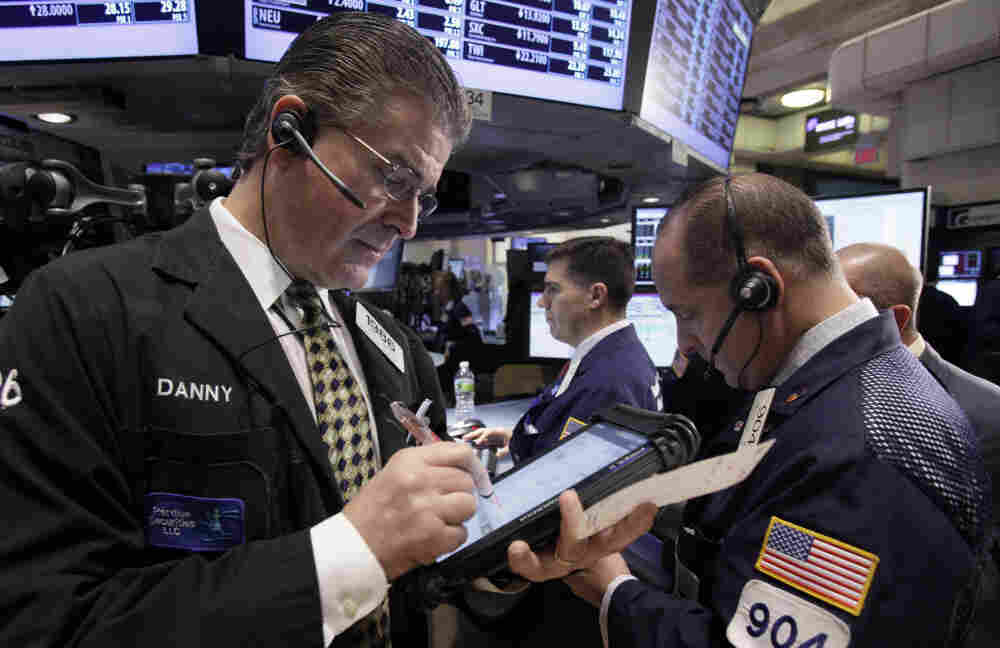 Daniel Kryger, left, works with fellow traders on the floor of the New York Stock Exchange. If the European Union can't agree on a plan, its debt crisis could lead to the kind of financial chaos that economists say surely would hurt the United States. Richard Drew/AP hide caption 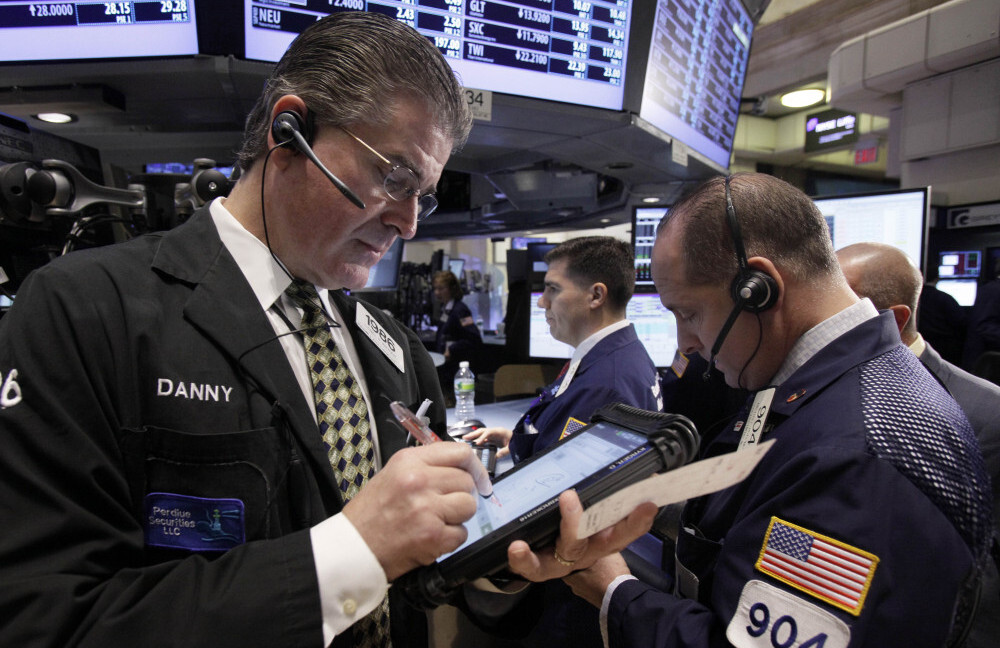 Daniel Kryger, left, works with fellow traders on the floor of the New York Stock Exchange. If the European Union can't agree on a plan, its debt crisis could lead to the kind of financial chaos that economists say surely would hurt the United States.

This week, European leaders will huddle in intense meetings, trying to work out a comprehensive plan to solve crushing debt problems.

Higher stakes are hard to imagine.

If all goes well at a summit in Brussels, the political leaders will make an announcement Friday, spelling out their long-term commitment to a plan to loosen a choking tangle of debt troubles. If they can't agree on a plan, the EU debt crisis could lead to the kind of financial chaos that economists say surely would hurt the United States.

"They have to fix this in a matter of days or weeks, not months," said Nariman Behravesh, chief economist for IHS Global Insight. "This is the single-biggest threat to the global economy — and to the U.S. economy."

The threat is so serious that last week, the U.S. Federal Reserve began working with the European Central Bank, the Bank of England, the Bank of Japan and Swiss National Bank to help pump dollars into Europe's banks. That extra money created enough "liquidity" to keep loans flowing in Europe and prevent a panic.

That coordinated action came in the wake of rumors that a major European bank was about to collapse. The central bankers' move helped tamp down fears of an impending credit crunch, but did not address the underlying problem of excess debt. As Bank of England Governor Mervyn King said, Europe's problem is "a solvency crisis, not a liquidity crisis."

Americans still looking for work or facing the prospect of losing a home may be wondering why the Federal Reserve is taking action in Europe. They may feel this country has enough problems of its own to keep U.S. central bankers busy.

But economists are unanimous in saying the United States has an enormous stake in this week's negotiations in Europe. Here are some reasons why:

The economies of the U.S. and EU tend to move closely in tandem, rising and falling at the same time. If the EU goes down, the U.S. is likely to follow.

First, the European Union, made up of 27 countries, is the United States' single biggest trading partner. Americans and Europeans do roughly a half-trillion dollars worth of trade with each other every year.

Because of those elaborate ties, U.S. and EU manufacturing orders tend to move closely in tandem, rising and falling at the same time. At the same time, U.S. corporations derive many of their profits from Europe.

So Behravesh says U.S. stock prices would likely drop if exports to Europe, or profits from Europe, were to drop. That would dampen any expansion plans for U.S. businesses, he said.

For a coal miner in West Virginia or a corn grower in Iowa or a chemical plant worker in Texas, sales to European customers are vital to maximize jobs, exports and profits.

"A hit on U.S. corporate profits in Europe would come back and haunt us in the form of slower hiring," Behravesh said.

But Americans not only trade with Europeans, they compete with them. U.S. manufacturers are trying to sell goods to customers in Asia and the rest of the world. Unfortunately for U.S. factory workers, Europe's troubles have driven down the value of the euro, giving eurozone manufacturers a currency advantage.

As a result, German exports have been booming, rising 18 percent between mid-2009 and mid-2011, according to Sebastian Mallaby, a senior fellow for international economics at the Council on Foreign Relations. Economic studies show that growth over the period would have been only 10 percent if not for the cheap-euro advantage, he said.

But the trade and profit issues pale compared with the really big threat posed by the EU debt crisis, i.e., the possible collapse of major European banks.

A banking crisis in Europe would hit this country, too, because large financial institutions are global these days. Many Americans may look in their own wallets and find an HSBC credit card in there. That company is based in London. Others may have their savings deposited with ING — that's a Dutch company.

This financial integration can bring new products and services to customers around the world, but it also brings new risks. The risk comes from the banks in Europe that own bonds issued by European governments. If Greece, Spain, Italy or others suddenly were to default on their debts, those banks could find themselves becoming insolvent as their assets become worthless.

If major European banks were to collapse, loans could freeze up — and financial panic could spread around the globe. Economists all say that would be a very chilling scenario that inevitably would severely damage the U.S. economy.

European bankers and political leaders are scrambling now to make sure that doesn't happen. EU Economics and Monetary Affairs Commissioner Olli Rehn said last week that Europe is entering a "critical period of 10 days to save the eurozone." That 10th day comes this Friday at the Brussels summit.

Friday's summit is now "being seen as the likely deadline for one last, final chance for Europe to put together 'the plan,'" said Otis Casey, a credit analyst with Markit, in a written assessment of the EU's troubles.