Accessibility links
Migrants Say They're Unwilling Mules For Cartels Traffickers are reportedly forcing illegal border crossers to smuggle drugs into the U.S. For courts along the border, it's a struggle to decide how to deal with terrified migrants, especially when there's no proof to their claims. 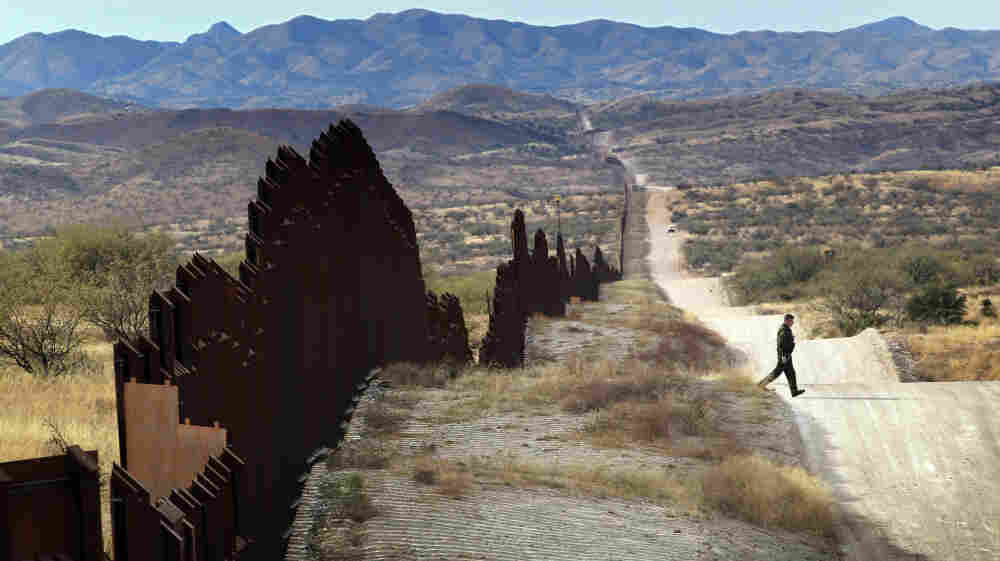 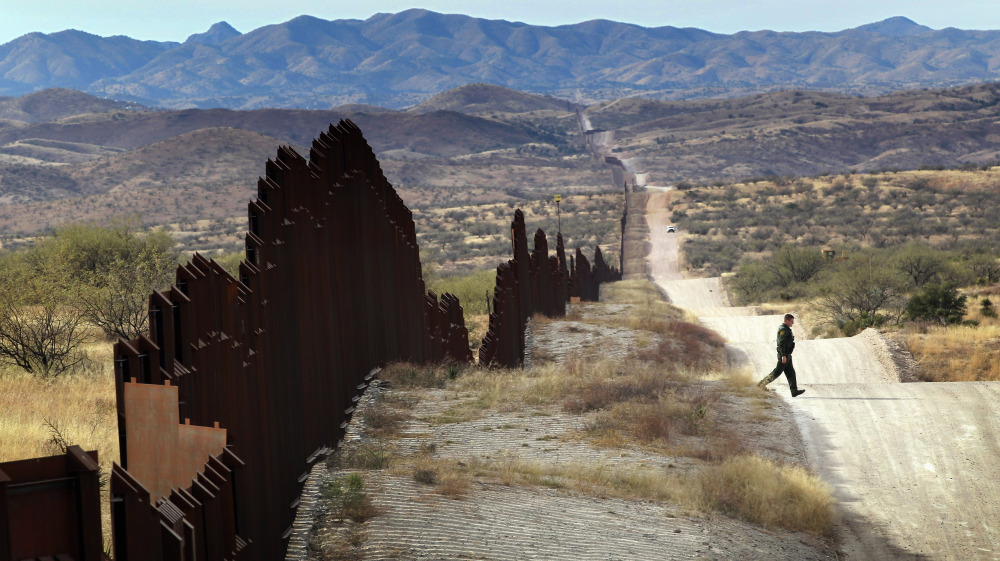 Mexican drug cartels have found a new source of labor to backpack marijuana into the United States: illegal immigrants.

Federal agents, prosecutors, defense attorneys and migrants themselves say that traffickers have begun recruiting undocumented immigrants at the border, both voluntarily and forcibly. Now, U.S. courts along the border have to decide what to do with terrified immigrants who come before them and say, "The cartel made me do it."

Rodolfo and Jose Luis were fairly typical economic immigrants. Strong, resourceful and poor, they arrived at Ojinaga, Mexico, with the intention of crossing the border and making their way to Colorado to look for work as roofers. But when they arrived at the Rio Grande on Oct. 21, ready for the journey north, they were met by three trucks full of heavily armed young toughs belonging to La Linea, a drug gang based upriver in Juarez.

"They hit us, threw us on the ground, searched us and took our money," Rodolfo said at the Pecos Criminal Justice Center in Pecos, Texas. "Then they told us if we didn't smuggle drugs for them, they would kill us. They didn't give us any other option."

So that's what Rodolfo and Jose Luis did. They each shouldered a 50-pound backpack full of marijuana and carried it across the dry riverbed into Presidio County, Texas. The cartel guide who accompanied them carried a radio, but no weapon. So as soon as they were out of sight of the border, they dropped the dope in the brush and high-tailed it north. The next morning, Border Patrol agents found them tromping through the desert and arrested them for illegal entry.

"I told the Border Patrol that we were forced to carry it," Rodolfo said. "They told us we were lying. I said, 'No, I'm telling the truth. We'll show you.' So we took them to the place near the river and the marijuana was still there."

In November, the prosecutor dropped the charges. Rodolfo and Jose Luis — fearing for their lives — were deported back to Mexico. They asked that their last names not be used in this story.

Fear Of Going Back

This is the new calculus for illegal border crossers. They have to deal with criminal syndicates that control all 2,000 miles of the international divide. To them, immigrants are just another income stream. They're robbed, they're kidnapped and their families are extorted, and, increasingly, they're dragooned into helping the gangs.

"About a year and a half ago, ourselves as well as our investigators started seeing these clients that would say, 'I don't care how long I'm going to get, I can't go home — they'll kill me,'" says Elizabeth Rogers, a federal public defender in West Texas for 27 years. Rodolfo and Jose Luis were her clients.

It's difficult to say how many cases like this are in federal courts along the border. Rogers says most of her backpacker cases these days claim coercion, and they didn't used to. The individual stories vary, but the common denominator is fear.

"[We] have grown men, rawboned cowboy guys from Chihuahua, begging for protection from deportation," Rogers says.

In Tucson, criminal defense attorney Raul Miranda says about one-third of his clients these days are telling him they were unwilling drug mules. Most say they were planning to cross the border, but the human smuggler they were dealing with turned out to be a marijuana smuggler.

"They're told by the people — who obviously work for the cartels — that they have to carry the bundle, or they'll reduce the fee that they're going to have to pay, or they'll forgive the fee," Miranda says. "But the people who are telling them this are armed, and the people feel threatened if they say no."

The identical story is heard 1,000 miles east in Laredo, Texas.

"They kind of feel like they don't have a choice because now they've been approached to do this, and you don't really want to say no to people who are committing such violent acts in Mexico," says Myrna Montemayor, a federal public defender.

The Mexican city of Nuevo Laredo — where the Pan-American Highway becomes Interstate 35 — is a major terminus for drug and human smugglers. Migrants headed north or people just deported from the U.S. end up here at a church-run shelter called Casa del Migrante.

"Boys, make a line, please!" a volunteer yells at dinnertime. Young men in baseball caps and baggy pants take their seats at long tables served with bowls of vegetable stew. Fernando is a slight Honduran in his early 20s with thick, kinky hair. He wears a dirty hoodie with a Tasmanian devil on it. He says he's had several run-ins with the violent drug mafia, the Zetas, here on the border.

"Oh yeah, they force you to work for them, and if you tell them you don't want to, they'll kill you. They'll use you as a lookout, or a kidnapper, or to carry drugs north," Fernando says. "Some people who don't have family to help them join these gangs because it's the only way they can cross the river. I won't work for them — I won't ask the cartel for help. I ask God to help me."

The U.S. justice system is generally skeptical of immigrants who claim "the cartel made me do it."

One fed-up federal prosecutor, in fact, told a California jury in a cocaine smuggling case, "Why don't we send a memo ... and say, 'Dear drug traffickers, when you hire someone to drive a load, tell them that they were forced to do it.'"

Lately, public defenders in courts along the southwest border have raised this "duress" claim more often in attempts to get the judge to lower their clients' punishment. The defense is rarely successful.

Rodolfo, the immigrant who crossed the border with Jose Luis, is the exception. Federal agents believed his story only after he volunteered to show them where he dropped the dope. Usually, though, there's no corroborating evidence; all the judge has is the defendant's word.

"I think that no doubt some of them are valid," says Robert Pitman, U.S. attorney for the Western District of Texas. "I think based on the information I get, that the vast majority of them are not valid. If you think about it, there are few things people can say in their defense when they're caught with a load of illegal drugs."

To test the duress claim, federal investigators look at an immigrant's criminal history and interview co-defendants to see if all the stories match up.

"What we're finding out in our investigations, in a lot of cases, is in fact that's not true. They're just kind of using that as a trendy defense, because maybe they think it's gonna work," says Will Glaspy, assistant special agent in charge with the DEA in the Rio Grande Valley of Texas.

Their individual stories may or may not be true, but they are entirely plausible. The trend of cartels preying on migrants has been well documented.

On Oct. 16, the Mexican army rescued 61 immigrants from a safe house in Piedras Negras, across the river from Eagle Pass, Texas. Mexican authorities say the immigrants were being held for ransom and forced to work for the cartel.

From a trafficker's perspective, using migrants to smuggle drugs is a reasonable tactic.

"You're placing the risk onto the migrants as they're coming into the U.S. In essence, you're not exposing your foot soldiers to capture," says Fred Burton, vice president for intelligence with the Austin-based global intelligence firm Stratfor.

Defense attorneys in three states interviewed by NPR say they are frustrated that the government maintains its longstanding distrust of duress claims, despite the new reality along the U.S.-Mexico border.

"It's a tough defense because it's another country, and we can't even investigate properly over there. So there's no proof. And that's not to say that they're not true," says Marissa Perez-Garcia, branch chief of the public defender's office in Laredo.

One immigrant defendant, according to his lawyer, recently blurted out in a West Texas courtroom, "Just kill me here so my family can claim my body. Because if you send me back, I know the narcos will kill me."