Accessibility links
Not Just Any Set: Behind The Scenes At 'Funny Or Die' Neda Ulaby visits the set of a video from the comedy website Funny Or Die, and she examines how funny videos have become a successful business. 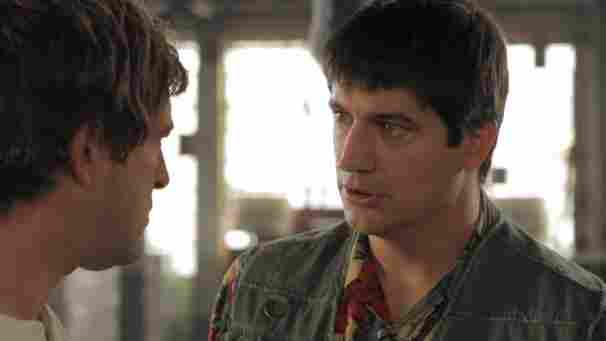 Mark Duplass and Ken Marino star in the new video "The First A.D.," a video at the successful website Funny Or Die. Screenshot hide caption 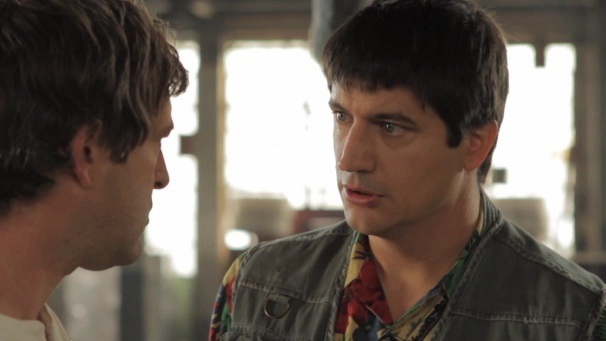 Mark Duplass and Ken Marino star in the new video "The First A.D.," a video at the successful website Funny Or Die.

Funny Or Die is far more than a leading comedy website that draws millions of viewers to its "Drunk History" videos or the ones where Will Ferrell gets berated by cranky toddlers. It's a creative sandbox for comic actors and writers.

For example, Adam Scott, a star of NBC's Parks And Recreation, wants to direct. So he's overseeing crew members in a derelict old warehouse in downtown Los Angeles as they spray smoke for his actors to walk through.

Problem: There's too much smoke.

"Hey, are we making a Cheech and Chong movie here?" the actor cracks.

This video is Scott's directing debut. That is, if you don't count a Crimes Of The Heart production in high school. The script for "The First A.D." (which contains strong language) is based on an actual on-set experience, when Scott was asked to perform a scary-looking stunt.

"There were two motorcycles that were going to fly through the air on both sides of me," he recalls. So he asked to watch a stuntman do it first — and was roundly mocked by the first assistant director.

"And it was really an emasculating experience," Scott says ruefully. (He's too polite to mention which movie, but it seems safe to guess it was Torque, in which he played a crooked FBI agent affiliated with a motorcycle gang.)

Funny or Die offers the perfect playground to try something new, says Naomi Scott, one of the video's producers and the actor's wife.

"They have a great infrastructure ... where they actually provide you with one of their amazing producers to kind of staff up and crew up," she says. "They are turnkey."

That means director Adam Scott and actors like Mark Duplass just have to show up.

Given its encouragement of the untested and the experimental, it's amazing that Funny or Die turns a profit, but it does. President and CEO Dick Glover says there's a reason.

"There [are] a lot that cost a hundred dollars," he says of the videos. And he says the website's "young and slightly upscale" viewers are a draw to both stars who want to enlarge their fan bases and to advertisers willing to be adventerous in product placement. (Absolut Vodka sponsored a series with absurdist comics Tim Heidecker and Eric Wareheim who dumped sand and frosting in their drinks at various points and ironically criticized each other for hawking and disparaging the product.)

But Glover says even more importantly, the videos function as development. They're low-cost test balloons for concepts for television shows and even movies.

Funny Or Die has launched two cable shows so far, with a third premiering later this month, Billy On The Street. And its' first feature film, Tim and Eric's Billion Dollar Movie, is scheduled to open in March.