Accessibility links
A User's Guide To The Climate Change Talks Representatives from 191 countries are meeting in South Africa this week to discuss the future of the Kyoto Protocol and whether to start work on a new binding treaty. Also attending is NPR's Richard Harris. We asked him to answer some questions about the U.N. climate change talks.

A User's Guide To The Climate Change Talks

A User's Guide To The Climate Change Talks 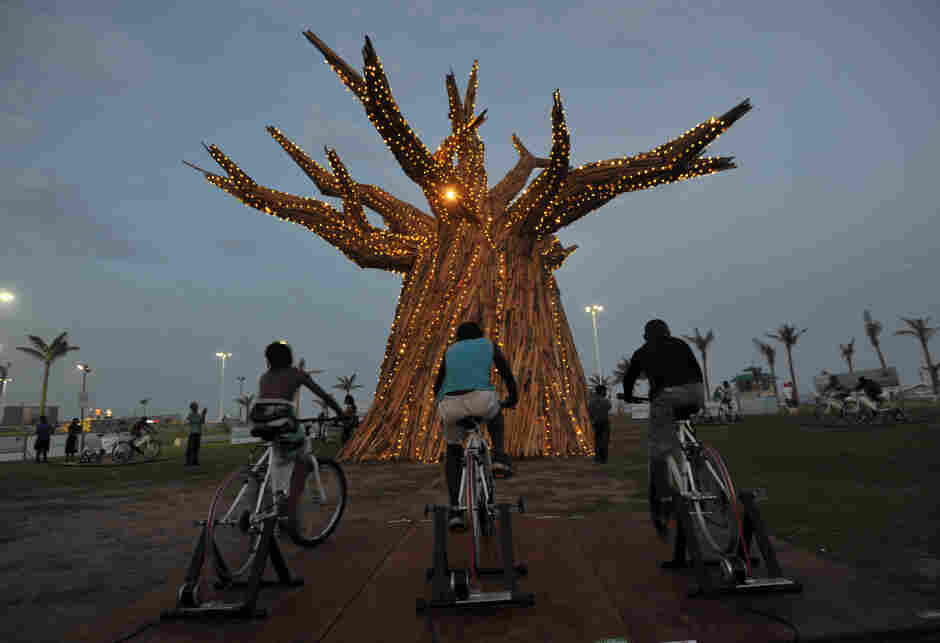 South Africans light up a Baobab tree by riding bikes in Durban as part of a renewable energies display on the beach front during the United Nations Climate Change Conference. Alexander Joe /AFP/Getty Images hide caption 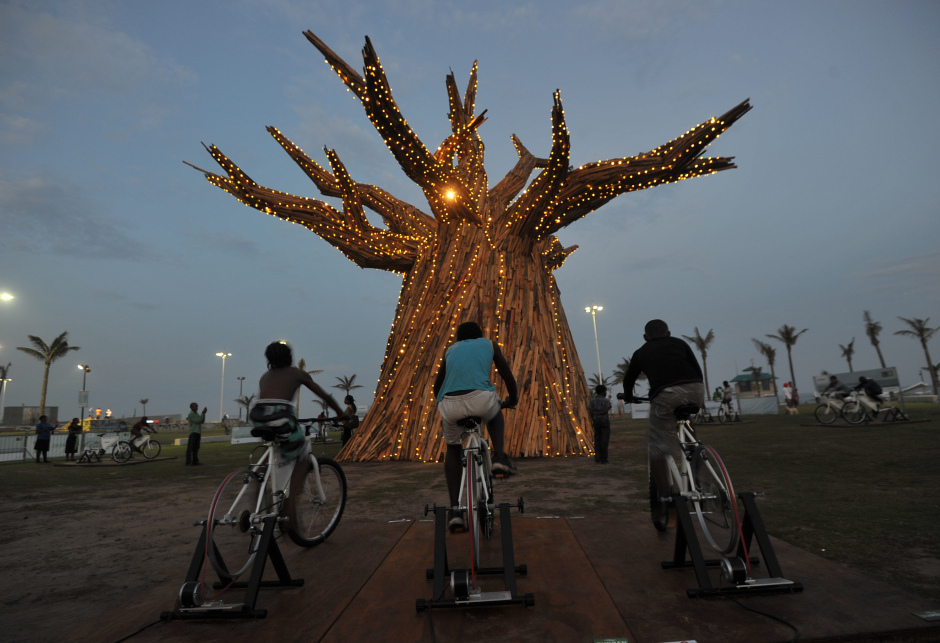 South Africans light up a Baobab tree by riding bikes in Durban as part of a renewable energies display on the beach front during the United Nations Climate Change Conference.

Representatives from 191 countries are meeting in Durban, South Africa, this week for United Nations climate change talks. One of the biggest questions is what will become of the Kyoto Protocol — a climate treaty signed in 1997. Key provisions of that expire next year and its future hangs in the balance. Another major question is whether nations can agree to a timeline that would lead to a new treaty that would include the world's biggest greenhouse-gas emitters, including the United States and China. The U.S. did not ratify the Kyoto treaty so it isn't bound by it; China is part of the treaty but is treated like a developing nation with no responsibility to reduce its emissions.

NPR's Richard Harris is covering the climate talks from Durban. We asked him to answer some questions about the meeting.

Canada, Russia and Japan have all said they're essentially backing out of a part of Kyoto; they're not going to sign up for a second round of emission reduction pledges under the treat. The EU is on the fence. Why are countries moving away from Kyoto?

The Kyoto treaty applies only to nations that represent less than 20 percent of global carbon emissions. Shortly after the pact was signed in 1997, the U.S. Senate made it clear it would not ratify a treaty that doesn't require action from the developing world. And since the treaty was negotiated, the developing world has led the way in emissions growth. China is now the world's largest emitter, surpassing the United States about five years ago. India's emissions are also on the rise. Europe has championed the Kyoto treaty, but is unhappy that it's increasingly going it alone. Developing nations, however, embrace the treaty, largely for its symbolic importance. They are not required to act under its provisions. The treaty puts the onus for action on the rich nations of the world.

Is the U.S. opposed to any legally binding treaty?

No. The United States has ratified the U.N. Framework Convention on Climate Change, which was negotiated in Rio de Janeiro in 1992 by then-President George H.W. Bush. It is the foundation for the Kyoto treaty and it also establishes the principle that the world needs to work to avoid having human activities interfere with the global climate in a dangerous way. The US position is that it would favor other legally binding agreements — but only if China and other major players also accept some legally binding action. Ratifying a treaty requires a two-thirds vote of the Senate and that creates an additional challenge.

What other options are on the table?

At climate talks in Copenhagen two years ago, many nations agreed to put forth their own national goals for reducing emissions — or at least to slow the growth of these emissions. This framework is called pledge-and-review. Countries pledge action, but the pledge isn't legally binding. The only consequence of failing to meet those pledges is international disapproval. The reality, however, is that even a legally binding framework such as the Kyoto Protocol doesn't punish infractions. Nations that miss their mark are simply expected to try harder next time (if there is a next time).

What are the upsides of the pledge-and-review approach?

The upside is that nations are asked to reflect on what they are able to accomplish and put that in writing. In many cases, these goals are contingent on other events happening within a national economy. For example, China's pledge is to reduce emissions relative to its economic growth. That means China isn't penalized if it grows faster than expected. The United States' pledge was contingent on climate legislation making it through Congress. That legislation did not become law. The Obama administration is still hoping it can usher in legislation to reach our national pledge — reducing emissions by 17 percent relative to our 2005 levels, by the year 2020.

What are the downsides to the pledge-and-review approach?

The pledges currently on the table fall far short of what would be required to stabilize the planet's atmosphere. China's current pledge, for example, only slows the rate at which that nation's emissions are growing; it doesn't reduce the amount of carbon dioxide it puts into the air. Activists argue that negotiated emissions targets could encourage countries to take on more ambitious goals.

If the United Nations climate talks fail to produce a global pact, what happens next?

It's unclear what happens next. Some nations want to use the Durban talks to start work on a new binding treaty, but many major players aren't interested in that. There are alternative approaches in the absence of a global pact in the style of the Kyoto Protocol. For example, it might be possible to reach an agreement to set a global limit for emissions from energy-intensive industries such as steelmaking. Or, if the world agreed to put a price on carbon (not likely at the moment), that would encourage a shift away from carbon dioxide emissions without requiring a treaty that spells out national emissions limits. A gloomier possibility is the world will not act until and unless there's a catastrophic event that's clearly triggered by climate change.

As greenhouse gas emissions continue to increase, are we running out of time to decide on a plan of action? Is there a point past which any concerted global effort to address climate change might be too late?

There is no clear scientific definition of a point-of-no-return for the climate. The atmosphere, oceans and ice sheets have various potential "tipping points" — events that are difficult or impossible to reverse, such as rapid melting of ice sheets. But it's unclear where those tipping points are. In the absence of a clear point-of-no-return, nations have agreed that the world should strive to limit global warming to no more than 2 degrees Celsius (3.6 F) over preindustrial levels. We're already well on our way to that limit, and given the rapid growth in fossil fuels globally, very substantial efforts would be required in just the next few years to prevent that degree of warming.