Accessibility links
The Deep-Sea Find That Changed Biology The depths of our oceans are dark, punishingly cold and utterly devoid of life. Or so scientists thought, until a team of researchers in the late 1970s stumbled upon squishy, rubbery worms, up to 7 feet long, living 8,000 feet below the surface of the Pacific.

In 1977, a small crew of oceanographers traveled to the bottom of the Pacific Ocean and stumbled across a brand new form of life. The discovery was so unusual, it turned biology on its head and brought into question much of what scientists thought they knew about where life can form and what it needs in order to survive.

Today, the Smithsonian Institution houses that remarkable discovery: a pale and fleshy, 4-foot-long worm that floats in the kind of pickle jar you'd see in your neighborhood delicatessen. It might not look like much now, but Kristian Fauchald, the Smithsonian's curator of worms, says that in 1977, this worm had everyone scratching their heads. At up to 7 feet in length, he says, "these are enormous beasts compared to normal worms." And they were thriving in large numbers without any obvious source of food or light.

"This," Fauchald says, holding up the worm, "is something absolutely unique." 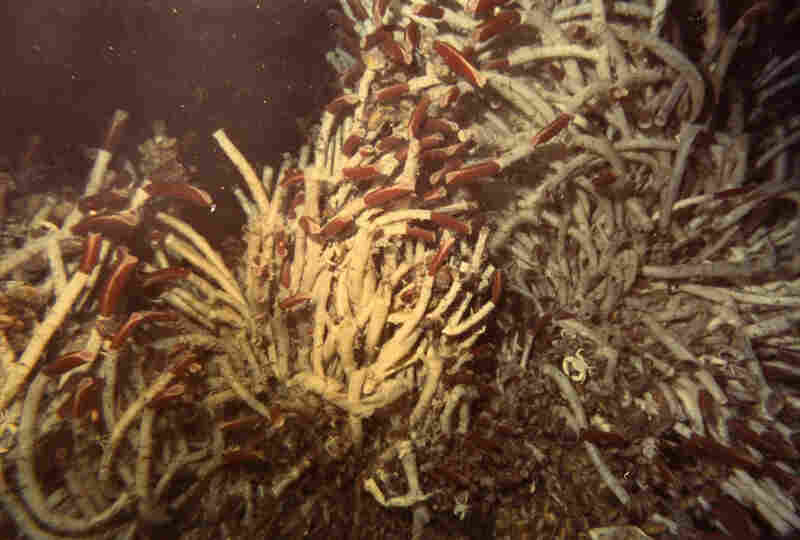 Researchers named the area where they found the tubeworms the "Garden of Eden" because of the abundant life around the deep-sea vents. Woods Hole Oceanographic Instution hide caption 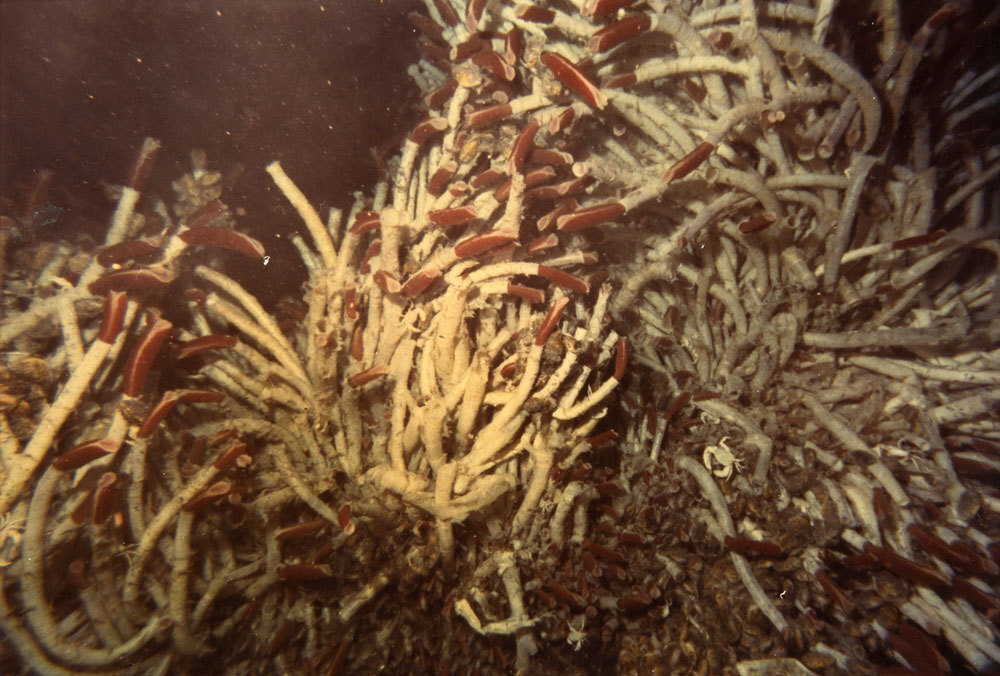 Researchers named the area where they found the tubeworms the "Garden of Eden" because of the abundant life around the deep-sea vents.

Kathy Crane and Jack Corliss weren't expecting to find anything alive when they started on their journey to explore the ocean floor. They were looking instead to answer some basic questions about the ocean's temperature and chemistry that science could not yet answer. "Saltiness was a big question," Crane says. "Students used to ask their professors, 'How did the ocean get its salt?' "

Some ocean scientists believed the answers to these questions lay in volcanic vents that they suspected peppered the ocean floor. So they put together an expedition in the Alvin, a tiny submarine operated by Woods Hole Oceanographic Institute, to go down and see for themselves.

Crane was then a 25-year-old grad student from the Scripps Institution of Oceanography. From the Alvin's mother ship, she guided the Alvin to an area in the eastern Pacific known as the Galapagos Rift. Corliss, a geologist from Oregon State University, rode aboard the Alvin itself.

Hey, can you biologists tell us what these things are? And they said, 'What? We don't know what that is. Hold everything!'

The day of the dive, Crane assumed her position as navigator and Corliss climbed aboard the Alvin. "I slipped through the porthole," he remembers. "It wasn't much bigger around than I was."

As the Alvin began its descent, Corliss watched through the window as the world around him went from blue to black to blacker than black. "We were descending into a different world," he says. Now and again, they saw sudden flashes of light from bioluminescent creatures swimming past the sub.

Back on the mother ship, Crane navigated the team toward the areas where they believed the vents were located. She also told the Alvin's pilot to look for "white clam shells against a background of black volcanic glass." From earlier imaging, they'd caught glimpses of what they thought were clamshells on the ocean floor, which they joked were tossed overboard from a Navy ship's clambake. It never occurred to the crew inside the sub that the shells were anything special. Until ...

"I was watching my temperature measurement," Corliss says, "and just that time, the pilot said, 'There's clams out here!' "

The Alvin opened up the ocean depths to human exploration. As ocean scientist Kathy Crane explains in the audio clips below, the deep-sea sub offers an experience of our planet found nowhere else.

On A Different Sensory World

On Seeing New Species Of Life

They'd found not just clamshells, but living, breathing clams that were a good foot-and-a-half long living alongside the hydrothermal vents. There were also mussels, anemones and brilliantly colored red-tipped worms — up to 7 feet long and anchored by slender white tubes swaying like a field of flowers.

"Absolutely stunningly beautiful," Corliss says. "The worms had white tubes and these beautiful red plumes, sort of like a three-dimensional feather. These feathers are sort of oscillating, undulating as they're pumping fluid into their body. It was amazing!"

The crew named the lush pocket of life "the Garden of Eden" and used the sub's mechanical arm to delicately gather up a bouquet of worms, mussels, clams and anemones. Once on the surface, they dropped them into containers of vodka — the only preservative they had. Then Crane picked up the phone and called Woods Hole.

"Hey," she asked, "can you biologists tell us what these things are? And they said, 'What? We don't know what that is. Hold everything!' "

Today, back at the Smithsonian, Kristian Fauchald opens up a pickle jar and pulls out the very first worm — Riftia pachyptilla — that Crane and her team brought up from the depths 34 years ago. "The really fun part," he says, "was trying to figure out what these animals are. How do they live?"

The key, he says, is that the worms don't use light but a "completely different energy source" in a process called chemosynthesis. The worm uses its red plume to absorb hydrogen sulfide — that nasty stuff that smells like rotten eggs — from the vent water. A colony of bacteria living inside the worm's gut gobbles up the hydrogen sulfide and uses it to create carbon compounds that feed the worm. Voila — chemosynthesis!

More Stories From The Alvin

In the months following the discovery of life near the hydrothermal vents, Crane says the excitement was intense, and the scientific community's biggest names came steam-rolling in.

"There were cases where people were stealing samples, clams and taking them off to their institutions and hiding them," she says. "You know, scientists can be extremely aggressive people to get what they want."

Eventually, Crane left the field of vent science. Today she is a senior researcher at the National Oceanic and Atmospheric Administration, working mostly in the Arctic.

Corliss says the discovery inspired him to change the focus of his work as he wondered whether these curious creatures, from such an inhospitable environment, might help explain how life started on Earth.

"It was quite amazing," he says. "It marked a transition in my life." Corliss has since devoted his career to studying the origins of life; today, he teaches biology at the Central European University in Budapest.

In the years since the original discovery, scientists have returned to the Galapagos Rift and the hydrothermal vents. The abundant "Garden of Eden" continues to thrive, and not far away, a new vent community of chemosynthetic life has begun to grow. Scientists have named the new site "Rosebud."