Accessibility links
For Mill Town's Youth, 'It Can't Get Any Worse' East Millinocket, Maine, used to be a booming paper mill town that offered residents what was basically a guaranteed ticket into the middle class. But today young people are scrambling to find a new path. "It's a little scary because it's going to be tough," says high school senior Jared Lyons. 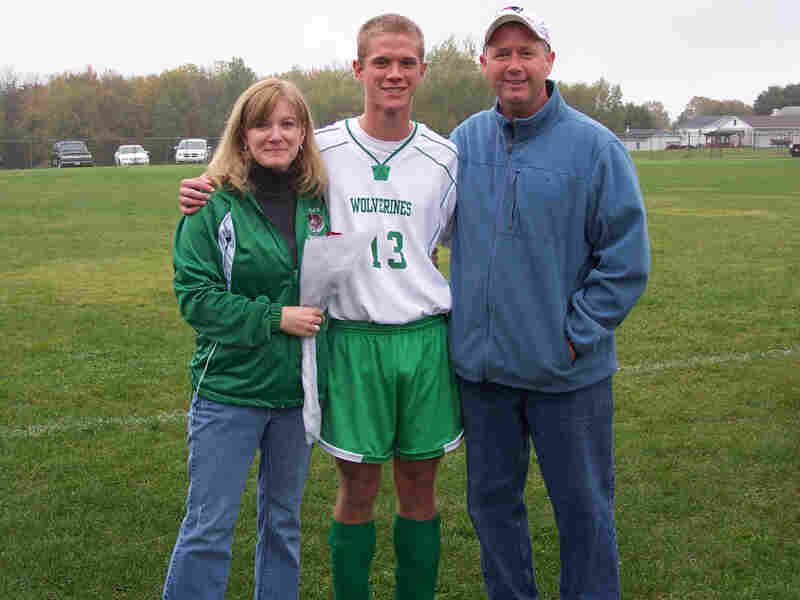 High school senior Jared Lyons (center), shown here with his parents, Kim and Bob, worries how he'll afford to achieve his dream of becoming a doctor. The economy, he says, "can't get any worse than it is now." Courtesy of Kim Lyons hide caption 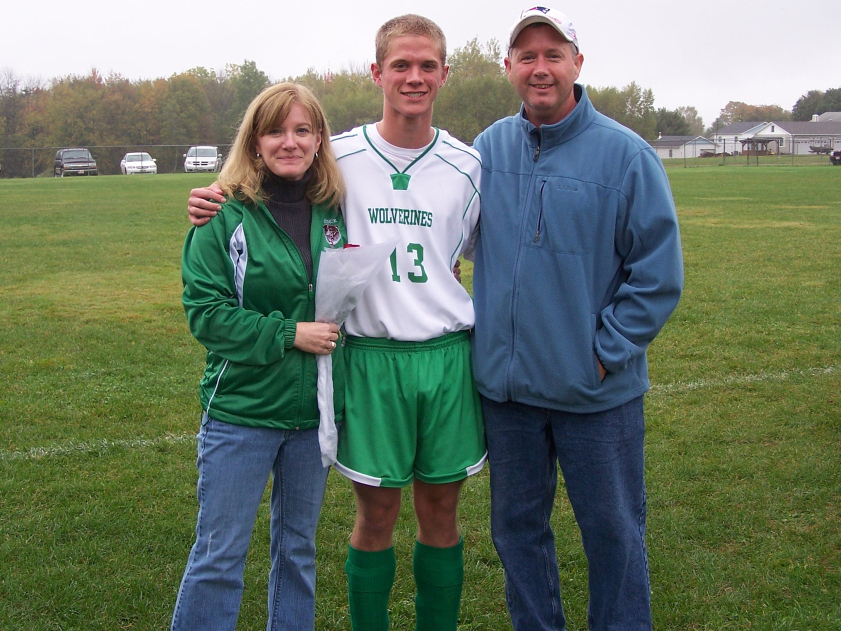 High school senior Jared Lyons (center), shown here with his parents, Kim and Bob, worries how he'll afford to achieve his dream of becoming a doctor. The economy, he says, "can't get any worse than it is now."

Coming after Gen X and Gen Y, the next generation of young people have been called "Gen Wrong Place, Wrong Time." With unemployment and college costs both sky-high and the housing market in collapse, young people today are facing extraordinary economic uncertainty.

Perhaps nowhere is that more clear than in a small town like East Millinocket, Maine.

Try to ask young folks here how they feel about their economic future, and you pretty much have your answer before you even start.

"There are not a lot of 22-year-olds in the area," says school superintendent Quenten Clark. "They're gone."

Clark has seen it, both personally and professionally. The once-booming mill town used to offer residents what was basically a guaranteed ticket into the middle class. Young families flocked here, and the high school was bursting with 100 to 200 students per grade.

But today, as the paper industry has declined and young people have left town for college and jobs, classes have shrunk to 20 or 30 students. Clark's own kids left town to start their careers in Beijing and Africa, a completely foreign idea when Clark was a kid.

"It used to be that opportunity was a quarter-mile away — at the bottom of the hill," he says, pointing toward the mill from his office at the high school.

Indeed, high school kids used to literally run the day they graduated to the paper mill, where they were guaranteed a good job — at a good wage for life. The mill once employed about 4,000; today, just 200 or so work there.

"It's a little scary, because it's going to be tough," says Jared Lyons, a senior at Schenck High School. As an honor roll student and captain of the soccer team, Lyons is the kind of kid who should be feeling downright cocky about his future. But having watched his father — and so many others — lose their mill jobs and seeing the economy crumble, he worries about how he'll afford college and achieve his dream to become a doctor.

"It really can't get worse than it is now," he says.

Matt Morris, a junior who also wants to make a career in the medical field, agrees.

"The whole economy sucks, for lack of a better term," he says. "We're going to have to work very hard — and a lot of it isn't in our hands, either."

That can be the hardest part for kids who've always been told that if they just study hard and get good grades, they could do whatever they want.

Instead, students like these — who've done everything they're supposed to — have a hard time finding even an after-school job for minimum wage. There are very few options in East Millinocket, where there is little more left than the pharmacy, two bars and a gas station.

Crystal Rodrigues, 17, has been looking for a job, to no avail, while she studies for the GED. She didn't want to talk about it herself, but her dad, Duane, says Crystal's job search has been almost unbearable.

"She seems really depressed about it," he says. "She's really down. She feels like there's no hope, and she just stays in her room all day. And then sometimes she'll have more hope again, and she'll go, 'I'm going to go out today, and I'm going to go look again.' "

But with unemployment around 17 percent around here, the competition for jobs is fierce. Even if you are lucky enough to have a car so you can make the trek to one of the larger surrounding towns, it's not much easier.

"I tried at McDonald's and at the grocery store and stuff," says Tayla Federico, 17. But she has yet to hear back. "They already have people working there — like old people."

"A lot of these kids are competing now in the workplace with people who have 25 years' experience who are not too good to be working for $7.50 an hour behind the fryolator," says Nancy McKechnie, youth manager for the Eastern Maine Development Corp. "And so that adds a whole other layer to kids' challenges."

The EMDC is a nonprofit that offers job training, career counseling, and classes to both young and older folks here. It's not unusual to find parents and their children enrolled in the same courses or both working in the computer room looking for jobs.

Elizabeth Haven, 18, is enrolled in medical classes through Eastern Maine Community College and is hoping to become a nurse.

"The odds are stacked against us younger kids," Haven says. "But they'll always need nurses and doctors, and you'll be set for life if you go in the medical field. So, I should be fine."

Administrators describe Haven as one of the most driven kids they've met. She undoubtedly will be fine, they say. It's the less motivated kids they worry about.

Gone are the good old days, when everyone — valedictorian or not — could count on a mill job. But Schenck High School Principal John Farrington says that idea has been deeply ingrained in the culture here, and some have yet to adapt.

"The window of opportunity is a lot smaller now than it was for my generation," Farrington says. "I wonder all the time what is going to become of young men and women if they don't get their act together in a hurry. And how do we light the fire under them? It's a tough job."

Motivating and navigating the college application and career planning process can be especially challenging for kids whose parents never went through it themselves.

Toni Federico signed up her daughter, Tayla, for help studying for her GED and preparing for a job in the medical field. "You need someone to guide you," Federico says.

Jared Lyons has that part figured out — he has known he wants to be a doctor since he was a little kid. He also knows his path will be much longer than his father's short walk down to the mill. But it's worth it, Jared says, if that's what it takes to make sure that he doesn't find himself 20 years from now out of work, like his father and so many others.

"I wouldn't trade [places]," he says. "I'd rather be in this situation and be more prepared. You're tougher if you get through it."

"That's your dream," says his mom, Kim. "You want him to go farther than we did. Shoot for the moon, but hope you land among the stars. Even if you don't get to exactly where you wanted to go, at least you've gone somewhere."

The sad part, she says, is that "somewhere" will most likely not be East Millinocket.

For Jared, achieving that American dream of prosperity will almost surely mean leaving the place where his entire family has lived — and prospered — for generations.