Accessibility links
Battle Cry: Occupy's Messaging Tactics Catch On Consensus-building and the "people's mic" surfaced during the anti-nuclear rallies of the 1980s and at the anti-globalization protests in the 1990s. But the Occupy movement has given them greater visibility. 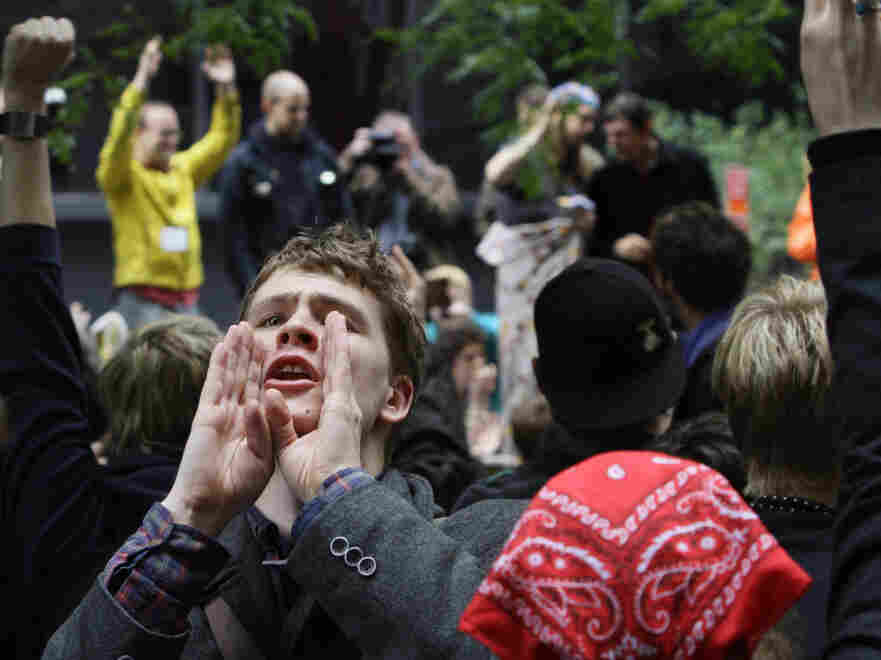 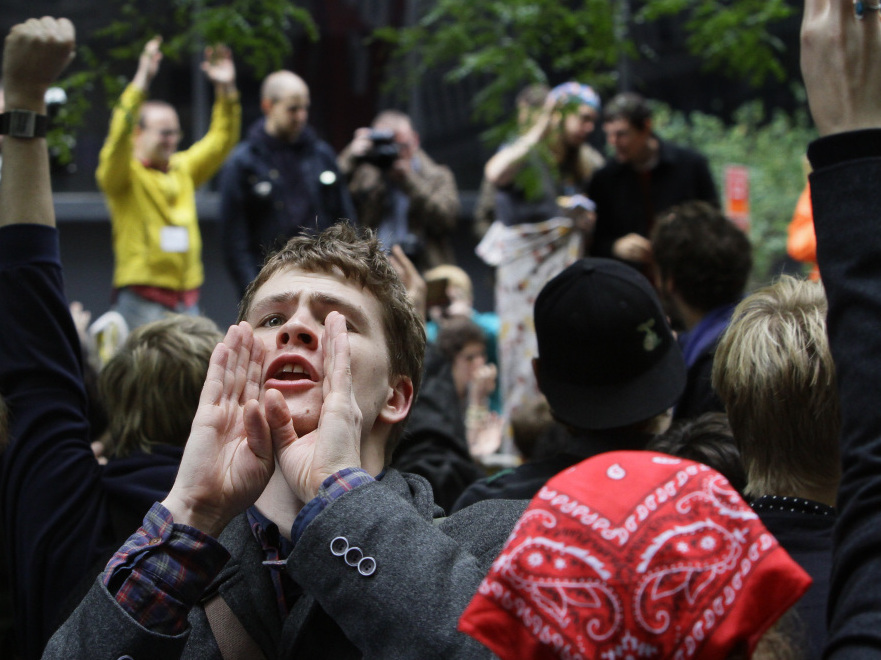 Lucas Brinson, 21, takes on the role of a human microphone, relaying information throughout New York City's Zuccotti Park Occupy Wall Street encampment days before protests were cleared out by police in mid-November.

Many people who've joined the Occupy Wall Street movement say the months-long communal living has been the experience of a lifetime. One of the movement's hallmarks — the "people's mic" — has come to represent the movement's collective spirit.

In New York's Zuccotti Park, protesters couldn't use amplified sound, so the large crowds took to repeating what a speaker said out of necessity. But the technique moved quickly across the country, even to cities like Oakland, Calif., where protesters had some powerful microphones.

This is how it works: Someone screams "mic-check" to grab everyone's attention and get the people's mic started. The speaker will then say something, for instance, "Thank you for your patience tonight," which the crowd repeats. This goes on until the speaker is finished.

Before their encampment was removed last week, Occupy L.A. protesters explained why they keep using the people's mic.

Sheila Nichols, 41, says that it embodies the movement's leaderless ethos.

Nichols, who spent two months camping in front of L.A.'s City Hall, says being part of Occupy changed her life.

"It's sort of an undefined, decentralized experience overall, which is what makes it an amazing and unique experience," she says.

Many Occupiers shared the sentiment. It was the process of working as a group, building consensus, and listening to every word everyone had to say that was most important to them.

For protesters like James Best, 34, these things were more important than finding a leader or one issue to champion.

"I think the most important thing about this movement thus far has been modeling direct democratic practice," Best says. "It's a very painful process, and it sometimes seems somewhat less than defending, but it's marvelous."

In addition to repeating everything the speaker says, participants also use a wide variety of hand gestures to signify their approval or disapproval of an idea. If this causes the message to degenerate and protesters to lose focus, someone stands up to "mic-check" the speaker.

But Occupiers weren't the first to use these techniques. Consensus-building and the people's mic were heard during the anti-nuclear rallies of the 1980s and later on at the anti-globalization protests in the 1990s.

The Occupy movement, however, has given the tactics wider visibility.

Longtime activist Tom Hayden says old-school forms of protest like following a charismatic leader or joining an established organization isn't the only way to participate in democracy anymore — clearly not for the Occupiers.

Michele Bachmann, a Republican presidential candidate, was interrupted during a speech on foreign policy on board the USS Yorktown by a "mic-check" staged by Occupy Wall Street protesters.

"There's empowerment through voting, and there's psychological empowerment — and both are very important in a democracy," Hayden says.

Protesters have taken their call-and-response to disrupt public meetings and events. Newt Gingrich recently got mic-checked.

As he introduced the Gingrich Productions' film City Upon on a Hill, someone called out, "Mic-check!" A crowd repeated, and the protester then said, "We love you Newt ... thank you for standing up for corporations."

Michele Bachmann also got mic-checked, as did President Obama on a recent campaign stop in New Hampshire.

Occupiers say the people's mic is coming to a shareholder's meeting or public event near you.