Accessibility links
'Once' And Again: A Love Story Gets A Second Life Once, the 2007 film about a street musician and Czech immigrant who pen songs during an unforgettable week in Dublin, is now an off-Broadway musical. John Tiffany, the acclaimed director of Black Watch, collaborates with Irish playwright Enda Walsh to tell the emotionally charged love story. 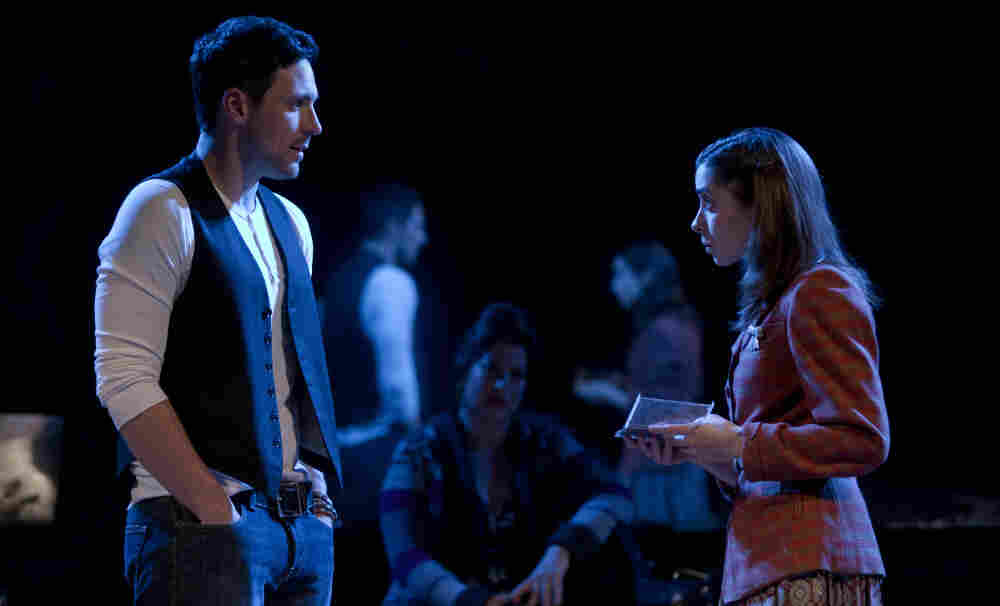 In Once, based on the cult-favorite Irish indie movie, a guy (Steve Kazee) and a girl (Cristin Milioti) fall in love during a whirlwind week of songwriting in Dublin. Joan Marcus hide caption 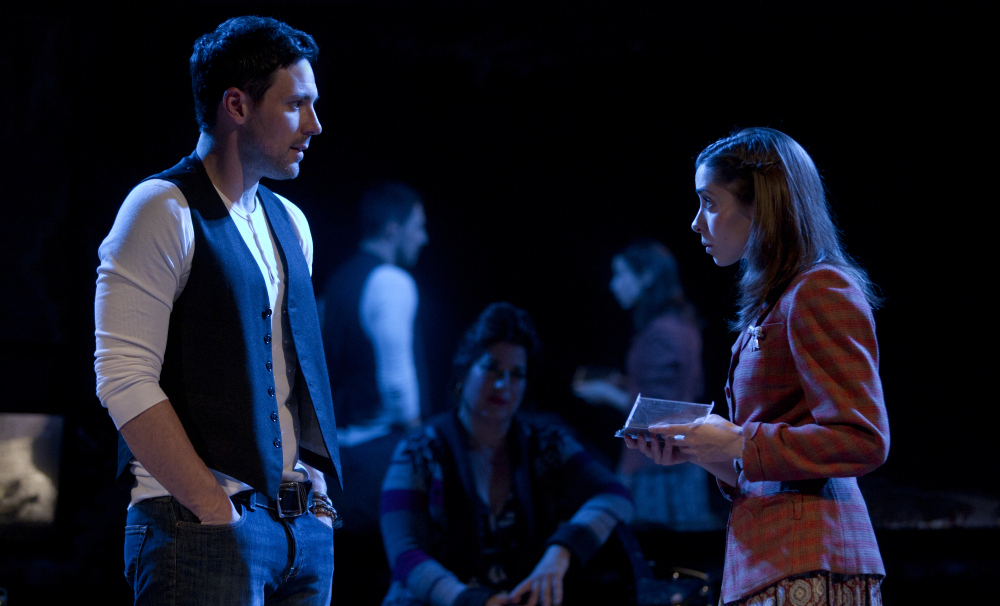 In Once, based on the cult-favorite Irish indie movie, a guy (Steve Kazee) and a girl (Cristin Milioti) fall in love during a whirlwind week of songwriting in Dublin.

Once, the much-loved 2007 Irish indie, was kind of the little movie musical that could. Made on a shoestring budget in Dublin, it starred songwriters Glen Hansard and Marketa Irglova as thinly veiled versions of themselves, and it was as much about the love of making music as it was about the budding but unfulfilled love between the two central characters.

With a soundtrack filled with attractive contemporary folk music, the film became a cult hit, grossing $20 million worldwide — and the pivotal song "Falling Slowly" won an Academy Award for Irglova and Hansard.

"We made this film two years ago, we shot on two handi-cams, it took us three weeks to make, we made it for a hundred grand," said a clearly stunned Hansard at the Oscar ceremony. "We never thought we'd ever come into a room like this and be in front of you people."

Now, Hansard and Irglova's idiosyncratic movie has been turned into an equally idiosyncratic piece of theater — by an entirely different team of collaborators. Director John Tiffany and choreographer Steven Hoggett created Black Watch, an indelible theater piece about a Scottish regiment in Iraq; they're working with the Dublin-bred playwright Enda Walsh, known for kaleidoscopically language-rich plays with a fierce and vivid sense of place and culture.

Walsh says the challenge was to take a delicate little story about an Irish busker and a Czech immigrant and create something more robust for the stage.

"Our sensibilities were always to retain the heart of the piece, but you know, it needs a language and it needs a more, sort of, physical narrative," he says. "Because if you were to place [the film] onstage, it just, it would evaporate. We know that, as theater makers."

What Walsh and his collaborators have done is not only reinforce plot points and build up characters who barely register in the film, but also to suffuse the story with music-making. They've kept most of the songs from the film, and added other material by Hansard and Irglova. All 13 actors play instruments — some play more than one — and all are onstage for the entire show.

It's kind of a big Irish hootenanny, set in a working bar, and the audience can buy a pint before the show and during intermission. And the songs are used in an unconventional way to tell the story. Director John Tiffany calls Once "a song sung in a pub" and says at the core, it's simply a play about music. 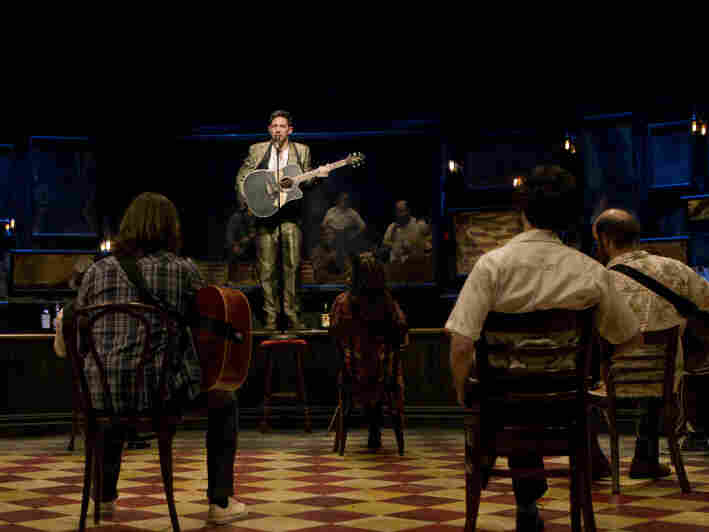 Kazee's singer-songwriter character is the one played in the film by Glen Hansard, who co-wrote the Academy Award-winning "Falling Slowly" with Marketa Irglova. Joan Marcus hide caption 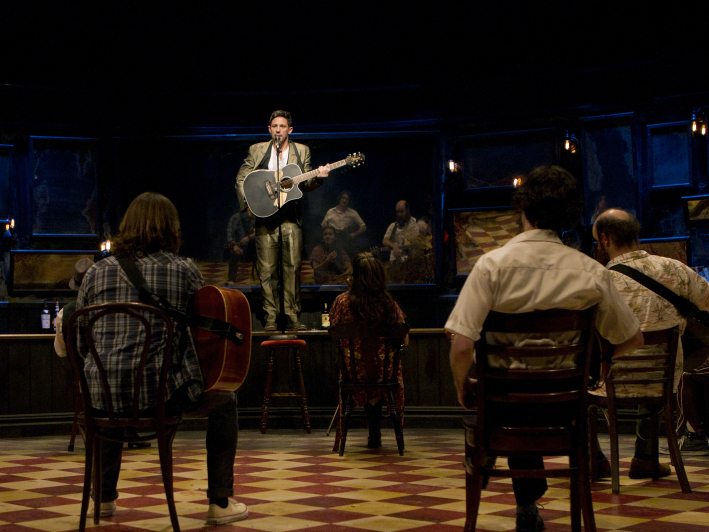 Kazee's singer-songwriter character is the one played in the film by Glen Hansard, who co-wrote the Academy Award-winning "Falling Slowly" with Marketa Irglova.

"It's a piece of theater about the healing power of music. And we don't really ever have that moment where somebody — supposedly in a realistic, naturalistic setting — suddenly bursts into song."

That's because the music is omnipresent. "As the audience come in," Tiffany says, "everybody's singing. So that's the vocabulary; that's the world that we're in."

About A Guy, And A Girl

Steve Kazee plays the role Glen Hansard had in the film, known to the audience only as "the guy." He says having the cast on both sides of the stage, enveloping him in sound, is a powerful experience.

"I don't know, it's a really beautiful thing to be part of," he says, "to sort of be onstage and be wrapped up inside of that swell of an ensemble of musicians and singers."

Kazee, who loved the film so much he initially turned down the role, says the musical has more dramatic thrust than the movie.

"In the film, it's more about two people who meet, they fall in love, and they have this thing for a week. In our show, it's about a guy who's broken — really broken — and a girl who's broken, and [they] find a way to heal themselves through each other."

Broken she may be, but "the girl," played by Cristin Milioti, drives the ephemeral love story for Enda Walsh, who describes her character as the heart of the show. She's the one responsible for pushing the guy and the other characters to fulfill their potential.

"Her character sort of barely existed on-screen, but for me [she] was all about the light — was all about someone who could change your world and change your life, immediately," Walsh says. "There's this sort of maelstrom of sort of emotion that goes on with her."

When he was called for this project, he confesses, Walsh had never seen the movie.

"I watched it and I thought, 'Oh right, this is It's A Wonderful Life, effectively.' You know, the story of a guy who's sort of given up on stuff, and this sort of angel arrives and casts a light over his life somehow, and the people around him."

There's something about Once that makes an audience feel as if they've eavesdropped on a series of intimate, emotionally touching moments. Director John Tiffany says there's "a simplicity about this story; there's a fragility to it."

"I don't know if Enda said this, but his friend, the film director Pavel Pavlovsky, said to Enda, when he found out he was working on Once, 'That'll be like catching a butterfly.' "

Once takes wing Dec. 6 at the New York Theatre Workshop, off-Broadway. If all goes well, its next stop could be Broadway this spring.