Accessibility links
Gingerly, GOP Contenders Address Payroll Tax Cut The payroll tax cut is popular with the American people. That helps explain why President Obama is talking about it so relentlessly — and, perhaps, why Republican presidential candidates have addressed the issue only glancingly. 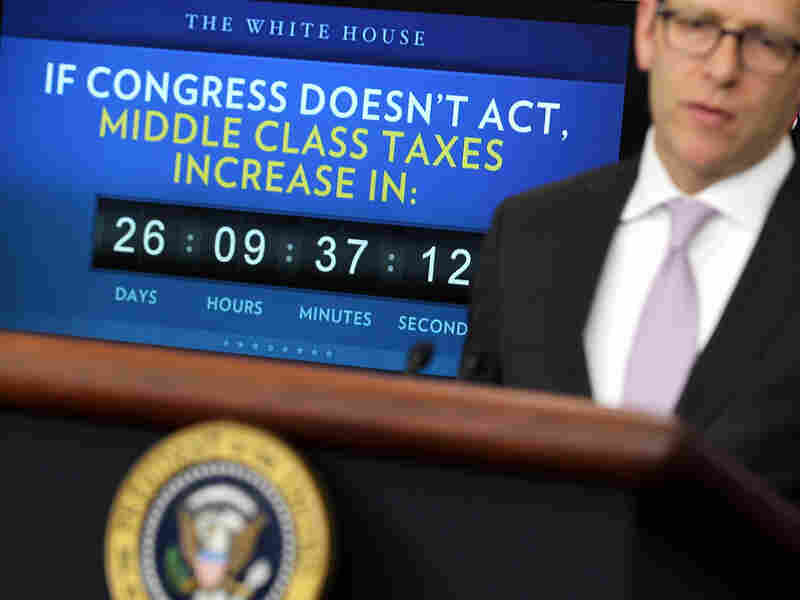 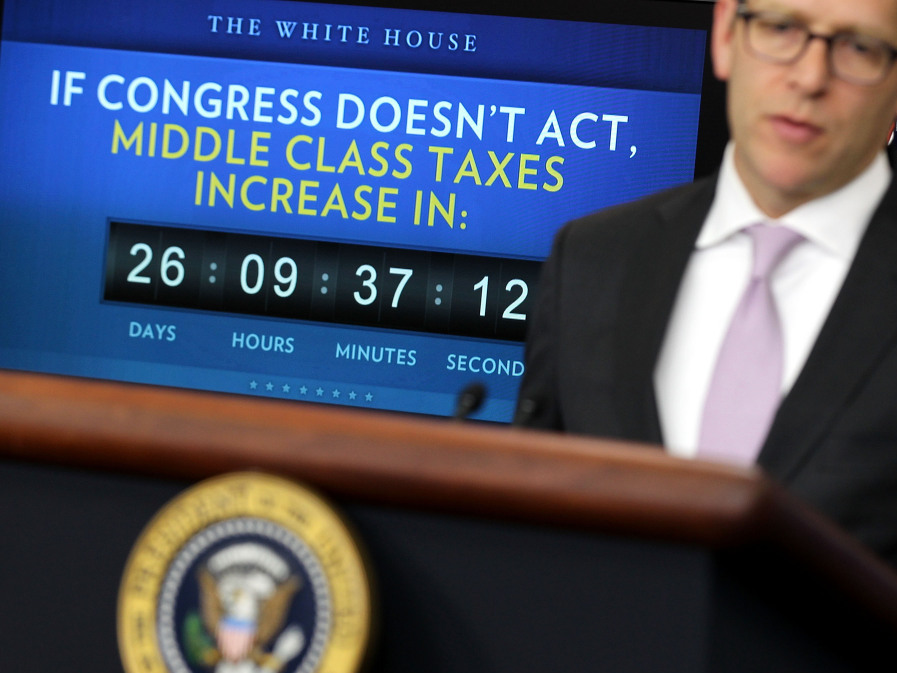 White House press secretary Jay Carney speaks Monday during his daily press briefing, as a clock counting down the expiration of the payroll tax cut benefit looms in the background.

At the end of this month, a payroll tax cut is set to expire that the White House says would result in a tax increase of about $1,000 per year on most middle-class families. The benefit is popular with the American people, which may be one reason President Obama has been relentlessly promoting it.

The president argues that extending the payroll tax "holiday" through 2012 is vital to the economy. Republicans in Congress are divided over that, but they strongly disagree with the president's plan to pay for it with a surtax on millionaires.

For their part, the GOP presidential candidates have addressed the issue only glancingly.

On a conservative radio program Monday, former Massachusetts Gov. Mitt Romney enthusiastically endorsed the renewal. "I would like to see the payroll tax cut extended just because I know that working families are really feeling the pinch right now," he told talk show host Michael Medved.

That's a stronger position than he took in Nashua, N.H., last month, when he said, "Modest proposals are not going to get America's economy going again."

Texas Rep. Ron Paul supports extending the tax cut too, according to a spokesman. And so does former Utah Gov. Jon Huntsman, who told PBS he thinks the payroll tax cut "is a good thing. I think it helps a whole lot of people, and I think it's something that would serve to stimulate this economy going forward."

Other candidates are less enthusiastic. A spokesman for Rick Perry says the Texas governor does not support what he called "short-term gimmicks."

Does The GOP Candidate Favor Extending The Payroll Tax Cut Into 2012?

Mitt Romney (Yes)
"I would like to see the payroll tax cut extended just because I know that working families are really feeling the pinch right now — middle-class Americans are having a hard time," Romney told conservative radio host Michael Medved on Monday.

Newt Gingrich (Maybe)
The Gingrich campaign told NPR the former House speaker wants to phase out the payroll tax cut but did not specify how soon. Bloomberg Television reports that in a September interview, Gingrich backed an extension, saying: "I am against tax increases in the middle of a depression."

Ron Paul (Yes)
The Texas congressman supports extending the payroll tax cut as long as it's not tied to any tax increases, a spokesman told NPR.

Jon Huntsman (Yes)
The former Utah governor supports extending the tax cuts but thinks it should be tied to broader tax reform, a spokesman told NPR.

Rick Perry (Maybe)
A spokeswoman did not give a direct "yes" or "no" answer but implied the Texas governor does not support an extension: "Gov. Perry believes we need long-term fundamental tax reform, not short-term gimmicks for a bigger problem."

Michele Bachmann (No)
The Minnesota congresswoman opposed the tax breaks last year in Congress and says she cannot support an extension this year. "Why would we continue something that isn't working and that is taking $111 billion away from senior citizens when they need that money in the Social Security trust fund?" she said Sunday on CNN's State of the Union.

Rick Santorum (Unclear)
The former Pennsylvania senator's campaign did not respond to NPR requests for the candidate's position on the issue.

The Newt Gingrich campaign says the former House speaker plans to phase out the payroll tax cut but did not specify when.

And Minnesota Rep. Michele Bachmann told CNN that since the tax cut didn't create jobs, it should end. "This payroll tax deduction didn't do what President Obama promised," she said. "Why would we continue something that isn't working?"

For candidates who support renewing the benefit, the trickier question is how to pay for it. None of the campaigns gave an exact accounting of where the money would come from. Almost all of them say how they would not fund the extension: As Romney put it in Nashua, "I don't want to raise taxes on anybody."

Michael Franc, vice president for government studies at the conservative Heritage Foundation, says it's not surprising that candidates are reluctant to wade into the details of this debate. Would-be presidents would rather focus on the big picture.

"What they're trying to do with the voters is say, 'Here's my value system, here's how I would apply it, here's what I would do,' whether it's to the tax code or to entitlement programs or to spending trajectories in general," Franc says.

So many of the candidates quickly shift from talking about the payroll tax cut to the bigger issue of fundamental tax reform — overhauling the system to make it cleaner and simpler, with fewer loopholes and patches.

Franc says the real problem is that a record number of provisions in the U.S. tax code now have expiration dates.

"It's kind of like in your household budget," he says. "If you had to renegotiate your cable contract or your budget every month, that would pretty much preclude you from dealing with longer-term family budgetary issues or investment decisions."

Leaders of both parties agree that this is a major issue, so a fundamental tax overhaul is on everybody's to-do list. But when Congress can't even agree on how to resolve these short-term tax debates, solutions to the long-term issues seem more unattainable than ever.