Accessibility links
Afghan Attacks Kill 60; Signs Of A Sectarian Shift? Most of the victims were Shiite worshippers in Kabul for one of the sect's holiest days. Experts worry that the suicide bombings could mark a turn in the decade-long war. One analyst says, "I think you're creating the seeds for civil war." 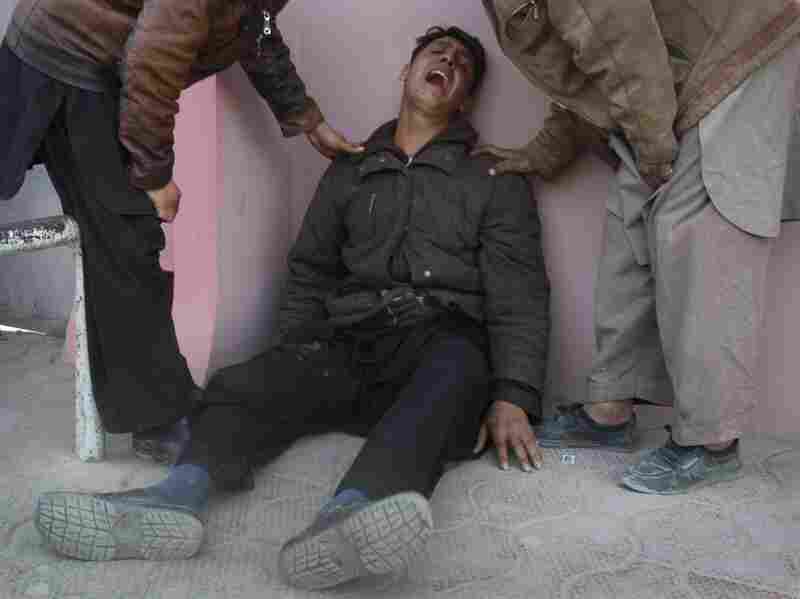 Relatives comfort an Afghan man outside a Kabul hospital where victims of Tuesday's suicide bombing were taken. A suicide bomber struck a crowd of Shiite worshippers marking a holy day in the Afghan capital. Ahmad Jamshid/AP hide caption 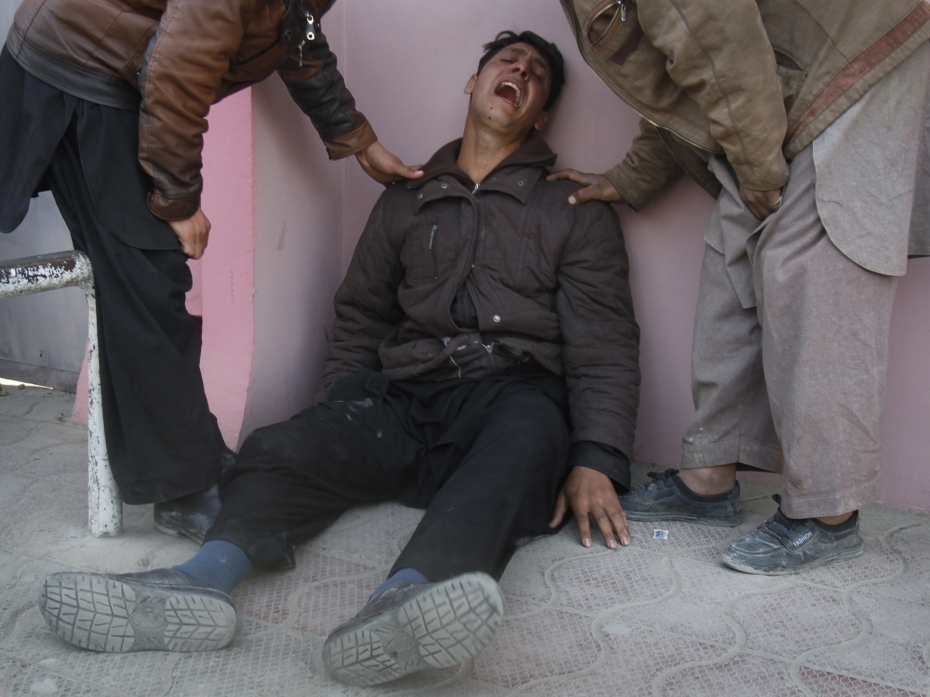 Relatives comfort an Afghan man outside a Kabul hospital where victims of Tuesday's suicide bombing were taken. A suicide bomber struck a crowd of Shiite worshippers marking a holy day in the Afghan capital.

Deadly suicide attacks in Afghanistan aimed at minority Shiite Muslims have experts wondering whether the war there could be taking a dangerous new sectarian turn.

Tuesday's twin attacks, in the capital of Kabul and the city of Mazar-i-Sharif, killed at least 60 Shiite worshippers as they celebrated Ashura, one of their sect's holiest days. It was the first such large-scale attack against Shiites in Afghanistan in more than a decade.

President Hamid Karzai called the attacks "unprecedented." A spokesman for Lashkar-e-Jhangvi, a Sunni extremist group based in Pakistan, claimed responsibility. The group has close ties to the Taliban and al-Qaida, as well as Pakistan's intelligence service, the ISI.

'The Seeds For Civil War'?

Experts are asking whether the attacks mean that anti-Shiite groups, which have carried out dozens of similar attacks in recent years inside Pakistan, are simply expanding their range. Alternately, Tuesday's suicide bombings could represent a larger strategy by the Taliban and its affiliated groups to turn the war into an Iraq-style sectarian conflict.

"I think you're creating the seeds for civil war," says Mark Sedra, a senior fellow at the Canada-based Centre for International Governance Innovation.

If sectarian and ethnic unrest spikes, he says, that could counter the argument that the United States and the international community will leave a stable Afghanistan behind in 2014.

Sedra doesn't believe the attack could have been carried out by Lashkar-e-Jhangvi without assistance from another group. Lashkar isn't known to have operated inside Afghanistan, he says. He thinks help came from either al-Qaida or the Taliban.

"These are the same sorts of attacks we saw in Iraq, targeting of Shia with the larger purpose of creating sectarian tensions," he says.

There are solidly drawn lines among ethnic and sectarian groups in Afghanistan, not just between Sunnis and Shiites, who are mainly ethnic Hazaras, but also among the Pashtuns, Uzbeks and Tajiks, as well as the various tribes.

"If we start to see some fracturing of existing alliances, if we start to see tensions emerging among these various groups, we might be setting the stage for a return to large-scale violence when the international forces leave," Sedra said.

The Taliban's History Of Persecuting Shiites

Vali Nasr, a professor at the Fletcher School of Law and Diplomacy at Tufts University, agrees that Tuesday's attacks could be the start of a new phase of the Afghanistan conflict.

"For a number of years, the emphasis was on fighting the United States and staying away from sectarianism, but right now that could be changing," Nasr says.

If the Taliban carried out the attacks against Shiites, who make up about 10 percent of Afghanistan's population, Nasr says that would be a return to the Tabiban's roots. He cites the massacre of an estimated 8,000 Hazaras after the Taliban captured Mazar-i-Sharif from its Shiite defenders in 1998.

"Anti-Shia sentiment is very much part of the very hard-line ideology of the Taliban," Nasr says. "It's the same sort of intellectual and ideological perspective that supports attacks on Shia in Pakistan."

Sparking sectarian violence "can easily spread to ethnic violence between the Pashtuns and the other ethnicities, and that adds new dimensions to the conflict," he adds.

Moving Out From Pakistan

Caroline Wadhams, a senior fellow at the Center for American Progress, describes Tuesday's violence as simply an "outlier" of the larger conflict.

Lashkar claimed responsibility for two earlier attacks — in 2009 on Ashura pilgrims that killed 30 people in Karachi, Pakistan, and the September killing of 29 Shiite pilgrims on a bus in Pakistan's Baluchistan province.

"The Pakistanis have been cracking down more on these groups, so maybe they're feeling pressure from that and have decided to move more into Afghanistan," Wadhams says.

She doesn't think the attacks on Tuesday would make strategic sense for the Taliban.

"Some of the attacks by the Haqqani network or [the Taliban], you can see a larger strategy at work and you can kind of understand the logic," she says. "This is just about killing out of hatred, out of an ideology. It doesn't seem to be more than that."

But Nasr sees Tuesday's violence as a signal.

"If you're a Hazara or a Tajik and you look at what happened to the Shias today, you see a warning sign," he says. "The Hazaras, the Uzbeks and the Tajiks are all going to be asking themselves, what happens when the Americans are gone? Who will protect them?"

For the Shiites in particular, the answer could be Iran, says Sedra.

"The Shias are intent on protecting themselves in any future Afghanistan, and they will likely have Iranian backing for that," he says. "This is going to make it more difficult to create the basic conditions for an orderly exit of U.S. and international forces."