Accessibility links
West Virginia Mine Settlement Fails To Bring Closure For Families The Justice Department announced a $210 million settlement Tuesday with the owner of the Upper Big Branch coal mine, where 29 miners died in an explosion last year. The federal mine safety agency, meanwhile, issued a final report on the blast. But families of the miners are still trying to make sense of the disaster. 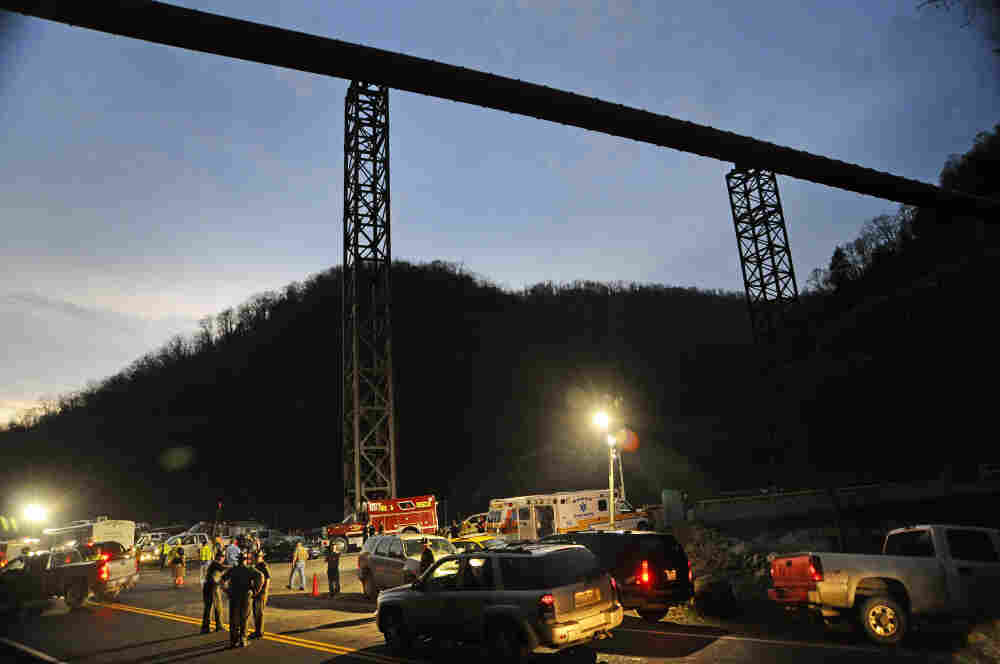 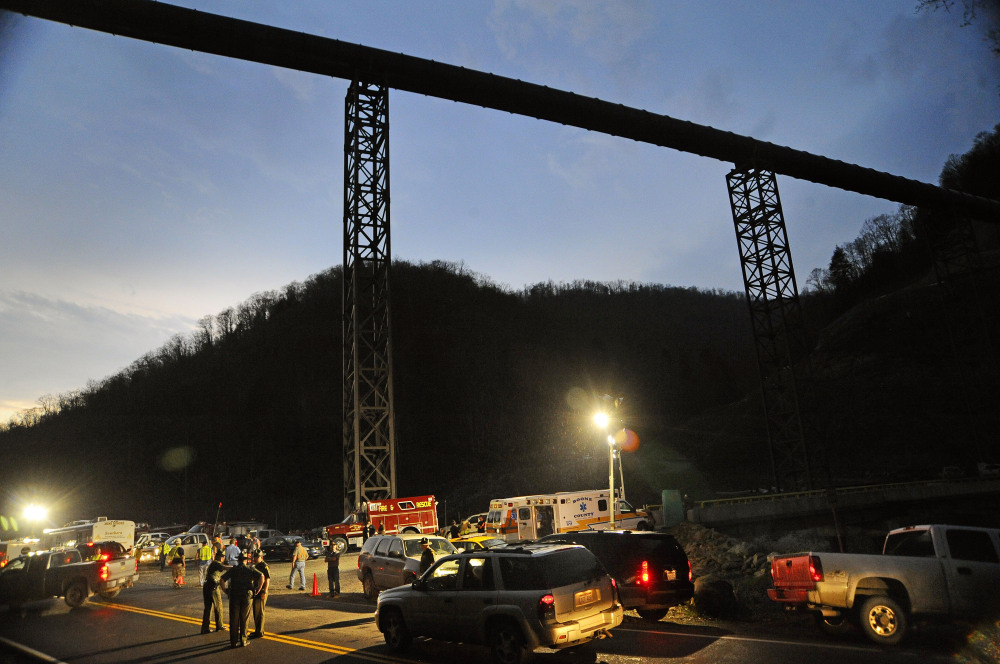 West Virginia State Police direct traffic at the entrance to Massey Energy's Upper Big Branch coal mine in Montcoal, W.Va., after an explosion April 5, 2010. Twenty-nine miners were killed in the blast.

The Justice Department and the federal Mine Safety and Health Administration tried to bring closure Tuesday to two key aspects of last year's deadly coal mine disaster in West Virginia. The mine safety agency issued its final report on the explosion — a 13-pound document that blamed Massey Energy for putting production far ahead of safety — and the DOJ announced the largest settlement ever in a coal mine disaster.

Closure is a relative concept, with 29 lives lost, 29 families now with brothers, sons, fathers, grandfathers and husbands gone for 20 months. After all the news of the day, Gary Quarles stood in the hallway at the Mine Safety and Training Academy in Beckley, W.Va., trying to make sense of it all. He wore a black T-shirt with these words printed on the front: "Gary Wayne Quarles. Son. April 5, 2010."

"I'm the same right now as I was when I found out that he was dead," he said of his son. "And I can't see it changing, no matter how much money — if there's any — that comes our way or how many people go to jail. That's not gonna help me."

Justice is not if you have enough money to pay off your heinous acts then you may go free. And that's what's happening here.

Earlier Tuesday, U.S. Attorney Booth Goodwin announced to the families of the Upper Big Branch victims that he had reached a $210 million settlement with the owner of the mine.

"We can never place a value on the lives of these victims," Goodwin said. "What we did want to achieve through this resolution is to make sure that it wasn't simply a stroke of a pen writing a check. It was a commitment to making the lives of miners safe every day."

The settlement extracts from Alpha Natural Resources, which bought Massey Energy earlier this year, nearly $130 million for mine safety training and major safety equipment improvements. Although the settlement blames Massey for the conditions that led to the deadly explosion, Alpha will pay nearly $35 million in fines for Massey's safety violations. As much as $1.5 million will go to each of the families as restitution.

In return, no criminal charges will be filed against Alpha. That angers Judy Jones Petersen, a Charleston physician whose brother Dean died in the disaster. 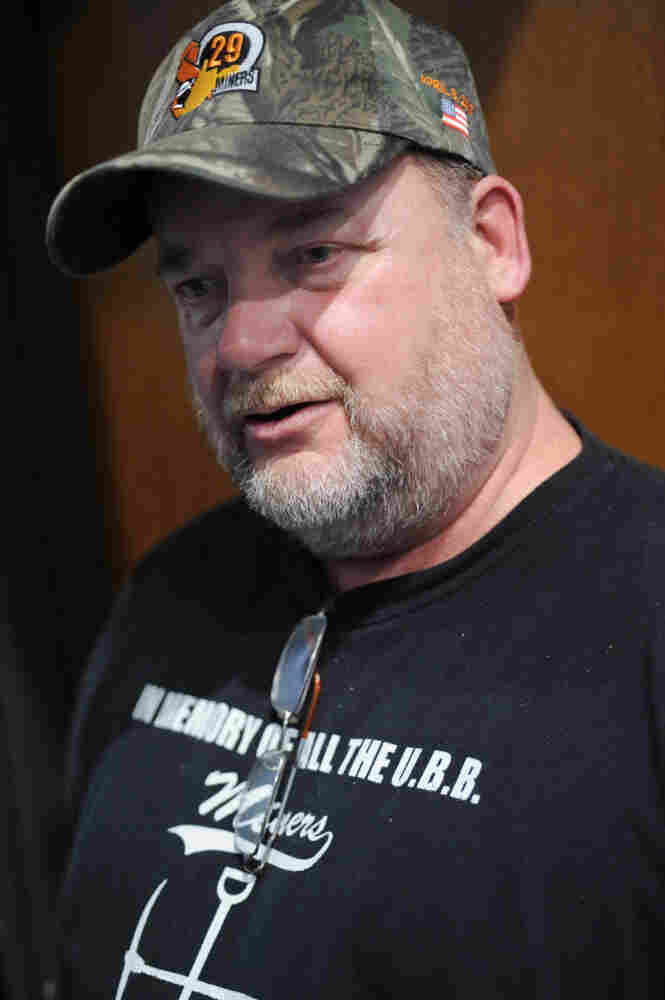 Gary Quarles, whose son died in the mine explosion, meets with officials from the federal Mine Safety and Health Administration on Tuesday. Jeff Gentner/AP hide caption 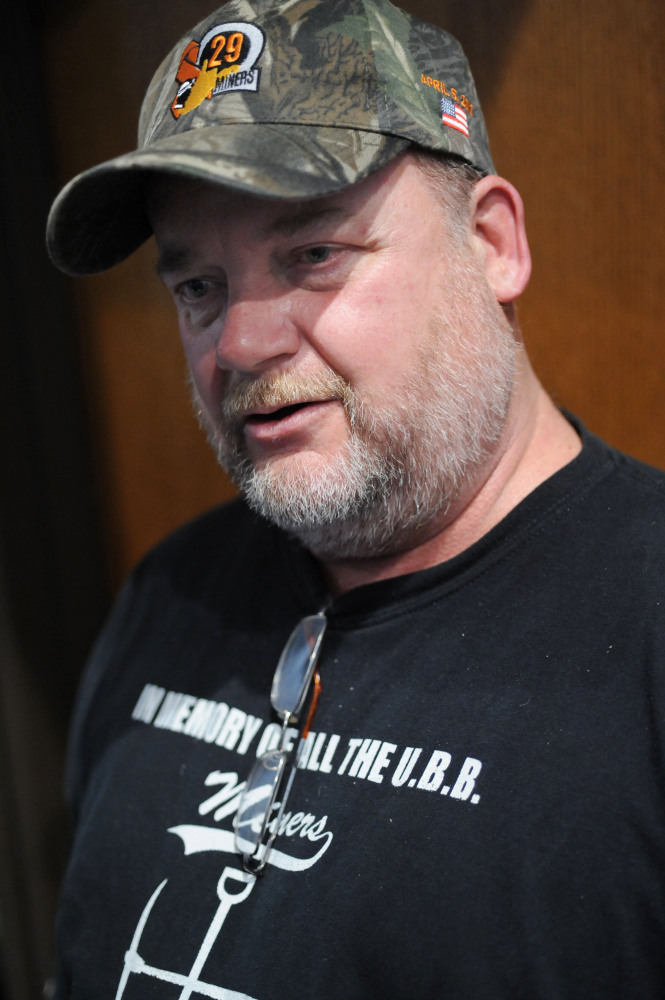 Gary Quarles, whose son died in the mine explosion, meets with officials from the federal Mine Safety and Health Administration on Tuesday.

Goodwin said there are limited ways to punish a corporation.

"It is not a life. It is not a being. It can't go to jail," he said. "The only thing that it can do is help make sure something like this doesn't happen again."

Goodwin said his office is still considering criminal charges against former Massey executives and managers responsible for the Upper Big Branch mine. They can be charged, despite the settlement. He said the investigation has revealed criminal conduct but declined to be more specific.

In a written statement, Alpha Natural Resources said it's time to take the hard lessons and create positive change in the industry. Back at the mine safety academy, Gary Quarles struggled to take it all in, tears welling in his eyes.

The Mine Safety and Health Administration blamed systematic, intentional and aggressive efforts by Massey Energy to avoid compliance with safety laws. Quarles shook his head after hearing that.