Accessibility links
Can 'Carbon Ranching' Offset Emissions In Calif.? Climate experts are thinking about growing dense fields of weeds to help soak up carbon dioxide from the atmosphere. This would require flooding dense, carbon-rich wetland soils of the San Joaquin Valley, and farmers hope money they make from capturing greenhouse gases would make up for the lost acreage. 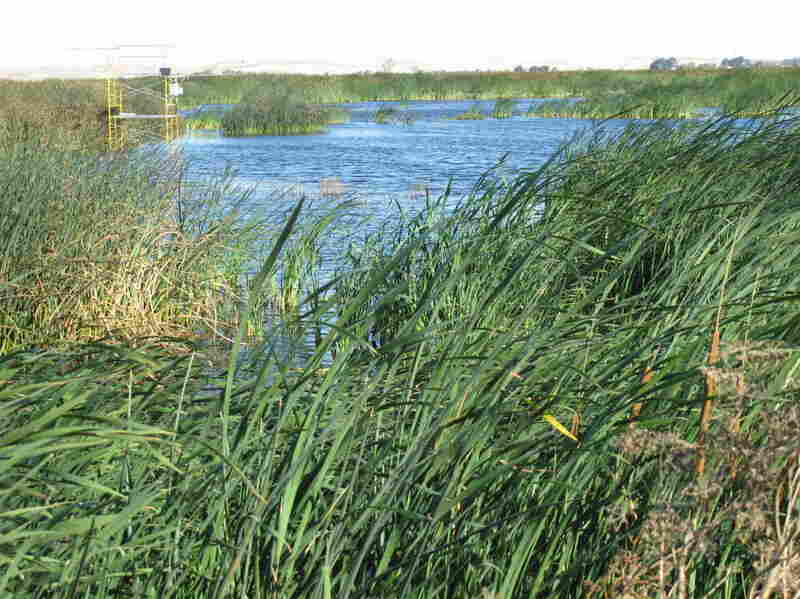 Tall grasses in the San Joaquin valley in California suck carbon dioxide out of the air and store it in the soil. It's one option that environmentalists are pursuing for greenhouse gas "offsets" that can be bought and sold in the state. Christopher Joyce/NPR hide caption 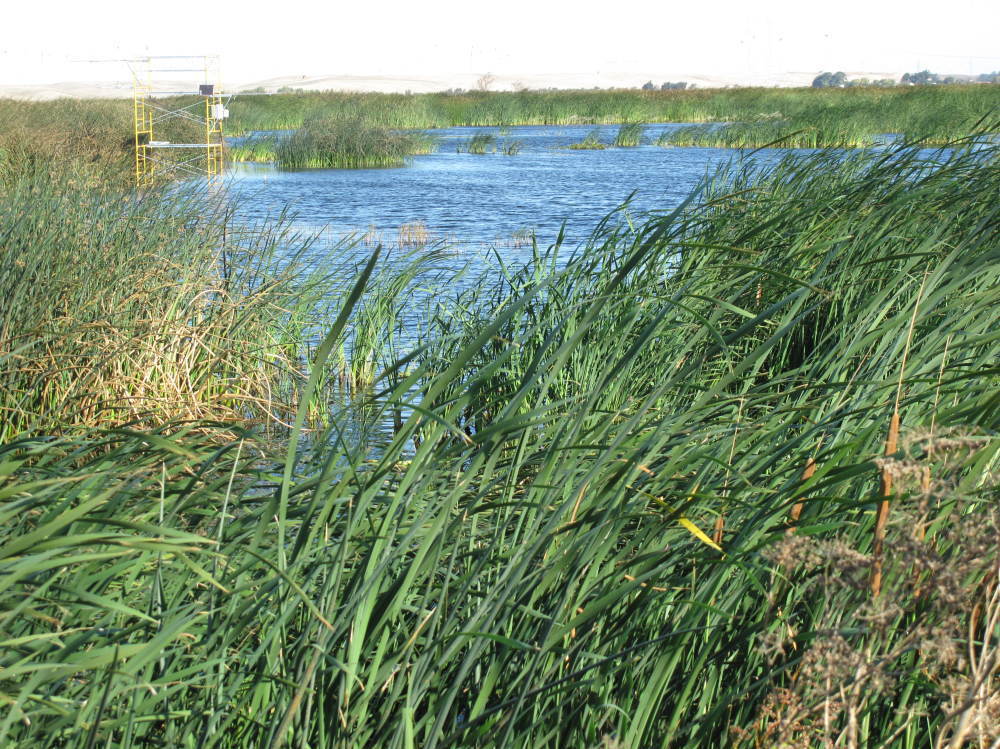 Tall grasses in the San Joaquin valley in California suck carbon dioxide out of the air and store it in the soil. It's one option that environmentalists are pursuing for greenhouse gas "offsets" that can be bought and sold in the state.

Climate experts are exploring the concept of growing dense fields of weeds to help soak up carbon dioxide from the atmosphere.

Just over a year from now, California will begin enforcing a set of laws that limit emissions of greenhouse gases from factories, power plants and, eventually, from vehicles.

So if you run a power plant in California, you might reduce your footprint by buying new, cleaner equipment. But that can be expensive.

Instead, you could help pay to protect a growing forest, because it sucks carbon dioxide out of the air. Or you could pay a farmer to capture methane from a pond of pig waste.

The market for these so-called greenhouse gas "offsets" is growing, and people are angling to come up with new kinds of offsets. One potential bumper crop lies in the state's huge agricultural heartland — the San Joaquin Valley, a place where biologist Whendee Silver spends a lot of time.

"What we found was that this area was a really big source of greenhouse gases," she says on a walk across some of the valley's prime grazing land.

Silver, a professor at the University of California, Berkeley, measures greenhouse gases coming up out of the peat-rich soil — carbon dioxide, nitrous oxide and methane. She's looking for ways to reduce those gases, and that could create offsets that farmers and ranchers could sell to businesses trying to reduce their carbon footprint.

One way to cork up those gases is to flood the peatland and grow a tall grass called tule. Silver and Berkeley environmental scientist Dennis Baldocchi point to a field of densely packed reeds about 12 feet high, swaying in the wind. Over centuries, this stuff breaks down into peat soil. 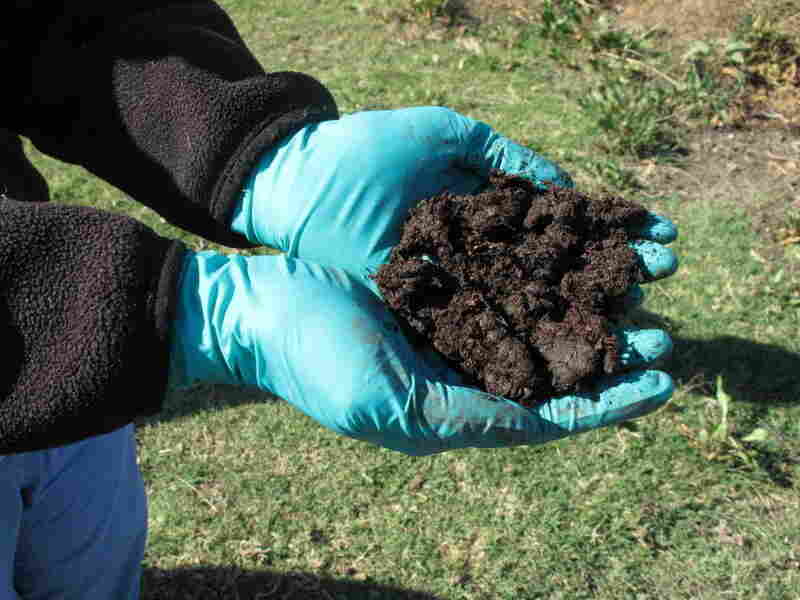 The soil in the wetlands area is dark and rich in carbon. Flooding of the land traps carbon from the air in the reeds and soil. Christopher Joyce/NPR hide caption 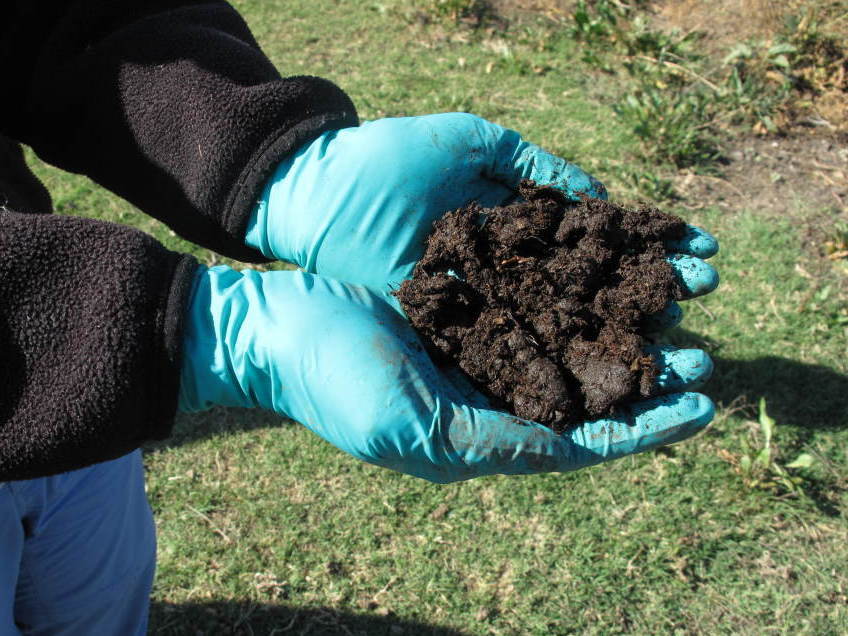 The soil in the wetlands area is dark and rich in carbon. Flooding of the land traps carbon from the air in the reeds and soil.

"These things have grown in this region for about 10,000 years or so," says Baldocchi, who grew up here on a walnut farm. "You can stick your hand down if you want to feel the stuff and see."

He bends over and scoops a handful of black, stinking mud from the floods ground. "This is the stuff that will form the soils that are now being lost as this land is being drained."

"Smell it," Silver says. "Do you smell the sulfur? That tells you that the air is gone. Take a good sniff. It smells like rotten eggs."

The flooded soil means there's very little oxygen there. That keeps bacteria from chewing carbon from the soil and sending it up into the atmosphere. And as the reeds grow — and they grow fast — they suck carbon out of the atmosphere like a big sponge.

"I think it's pretty clear when you can see this beautiful green swath of wetland growing next to the brown hills at this time of year, you can see, this is carbon," Silver says. That's carbon taken out of the air and sequestered in the reeds and the soil.

Flooding would return the land to the way it used to be. However, that would reduce acreage for farmers and ranchers. But if they can get paid enough for the greenhouse gases they capture, it could be profitable. Local rice farmers are interested too, since they flood land to grow rice, and that could capture greenhouse gases too.

"Here we may have a small area, but it's a very, very intense carbon sink, and that's the strength of this project," Baldocchi says.

But there are kinks to work out. For example, flooding land may reduce emissions of carbon and nitrous oxide — both greenhouse gases — but increase methane, another greenhouse gas.

"So that's part of the reason we're looking at this," explains Silver. "How much methane comes out, how much carbon gets stored in, and is it sustainable? Can we keep that positive balance of carbon coming in?"

Silver calls this "carbon ranching" — an alternative to expensive retrofits at factories.

Derik Broekhoff is vice president for policy at Climate Action Reserve, which ensures that these offsets actually do what they're supposed to do: lower emissions. "A lot of these emission reductions you can do that a lot more cheaply so it reduces the overall cost," he says.

California officials are interested in carbon ranching in part because the state government needs to reduce emissions from its own facilities and vehicles. And it owns plenty of land in the delta.