Accessibility links
In Policing Fashion, Moms Find A New Power Online When retailers go too far in trying to drum up sales, consumers turn to online petitions and social media campaigns to pressure them to change. Mothers are one group that's proven to be very powerful when attacking messages they consider to be sexist. 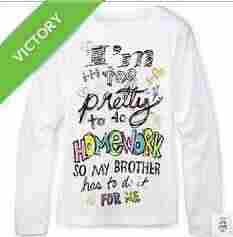 After J.C. Penney advertised a shirt many people found sexist, Lauren Todd launched an online petition. This screengrab was taken from Change.org, after J.C. Penney removed the shirt from its inventory. Change.org hide caption

Angry consumers have been turning to online petitions to try to change what retailers put on their store shelves. This fall, J.C. Penney had to scrap a shirt that read "I'm Too Pretty To Do Homework, So My Brother Has To Do It For Me," after an online backlash by consumers calling the shirt sexist. Other retailers are also feeling the pressure.

When New York resident Lauren Todd saw a photo of the "I'm Too Pretty To Do Homework" shirt on Facebook last August, she was annoyed. So she started a petition on the social action website Change.org.

She was later interviewed on CBS, where she said, "It was outrageous enough to be posted on Facebook, but it was actually more outrageous than that — and I felt like I needed to do something about it."

Her petition urged shoppers to boycott J.C. Penney until it stopped selling shirts with what she called sexist messaging.

Knox is the director of women's rights organizing for Change.org. She has thousands of Twitter followers; some of them began tweeting about the shirt and signing the digital petition.

"From the time that Lauren started the petition on Change.org and J.C. Penney pulled the shirt," Knox says, "it was about 10 hours, in which it got over 2,000 signatures, and at one point was generating over 400 tweets a minute."

Knox says that with every new signature, an email was automatically sent to the J.C. Penney press team; another went to the company's CEO.

J.C. Penney would not comment for this story; the company wouldn't say how it comes up with the designs for its kids' clothing.

John Noone is a designer who has worked with kids' clothing retailers such as Macy's and Kmart. He says he's always used slogans with words like "pretty" or "princess" for girls.

"I guess it's just so ingrained in our culture that it's an easy sale," he says. "It's going to be easier to sell a shirt that says, you know, 'My Little Princess' than 'My A Student.' "

Noone says that these days, designers get their ideas from anywhere: a celebrity tweet or a line on a TV show.

But if a consumer doesn't think the designs are funny, they can do more than just grumble or not buy the shirt.

Not long after J.C. Penney pulled the "I'm Too Pretty" shirt, fashion chain Forever 21 was hit by a barrage of online complaints, a petition and media publicity about its girls' shirt with the message "Allergic To Algebra." The retailer removed it the day after the story spread.

But not all consumers care. Robin Sackin, a professor at New York's Fashion Institute of Technology, says people need to lighten up. Children are influenced by their parents, she says — not by slogans on T-shirts.

And not all online petitions are effective. The recent Change.org petition started by Target employees who didn't want the company to open on Thanksgiving got more than 200,000 signatures, but the company didn't budge.

Ben Rattray, the CEO of Change.org, says that in the case of J.C. Penney, it was a vital group of consumers who were up in arms.

"Companies are certainly more concerned when the people involved are moms, specifically," Rattray says. "I mean, women in general, and moms in particular, control the vast majority of spending in their households."

Michele Yulo is a mother who signed the J.C. Penney petition; she also spread the word via her blog, on Facebook and on Twitter. She says that she's been frustrated for years about the kind of clothing retailers sell for young girls, and the harm it might have on girls' self-esteem as they grow older.

"It doesn't have to be egregious to sink into the mindset," she says. "It's just this — I call it a slow drip of messages."

Yulo actually started her own girls' clothing brand, called Princess Free Zone, which features non-stereotypical colors and designs. But she keeps up the pressure on mainstream retailers.

Last month, she emailed the childrens-wear company Gymboree and started an online petition to complain about its baby onesies, which read "Smart Like Daddy" and "Pretty Like Mommy."

Days later, Gymboree emailed Yulo to say that the items were no longer for sale.