Accessibility links
On The Run, Under The Radar, With Syria's Rebels The Free Syrian Army, a ragtag force assembled by defecting Syrian soldiers, has built a sort of underground railroad to get weapons and people in and out of the locked-down country. NPR's Kelly McEvers spent an evening crossing the Lebanon-Syria border with a group of them. 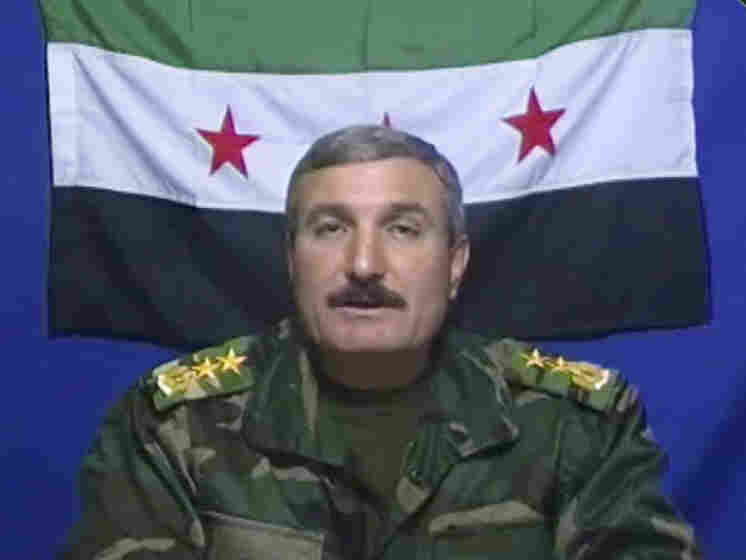 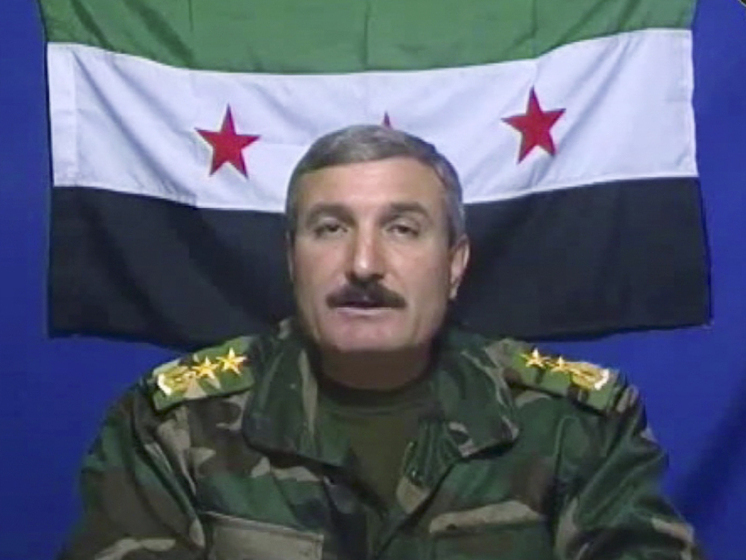 Riad al-Asaad says he's the leader of the Free Syrian Army, a group of Syrian defectors who recently posted this video on the group's Facebook page.

In Syria, the clashes between the opposition movement and the government's security forces are starting to look more and more like a civil war. Protests across the country still remain mostly peaceful, but soldiers who have defected are assembling a force called the Free Syrian Army, which has been launching attacks on government targets. NPR's Kelly McEvers recently met up with members of the Free Syrian Army when she crossed from Lebanon into Syria on a secret nighttime excursion.

My interpreter and I are on a dirt road, waiting to hop on the back of a motorcycle. We've been dropped off by one contact, and we're about to go with another one. It's cold, it's dark, and we are crossing the border from Lebanon into Syria.

Our guides are from the Free Syrian Army, which doesn't hold any territory. It's not like in Libya, where rebels fighting to bring down Moammar Gadhafi controlled a swath of the country. Instead, what the Syrian rebels have is a kind of underground railroad. It's a series of safe houses in Lebanon that lead to smuggling paths that lead to more safe houses inside Syria.

The idea is that guns — and sometimes reporters — can come into Syria, while wounded rebels can go out.

Once we're inside Syria, we meet the rebels who handle this traffic. They put us in a car that looks like it's been through hell. Rebels point their guns out windows that no longer exist. Lookouts positioned along the road give hand signals that it's safe to pass.

We drive very fast, too fast, down paved and unpaved roads, mainly through farms. We're way outside of any town or village. The men are all wearing green khaki-type jackets and headscarves. They've got beards, and they're pumped with adrenaline. They drink vodka and Red Bull from skinny cans. Their guns are AK-47s.

The rebels show us a spot where they say two bodies were dumped just a few days before. They say the dead men were soldiers, just like they were, who had refused orders to fire on protesters and who'd tried to defect from the army. But those two didn't make it.

Our final stop is a shack in the middle of an apple orchard. It's a tiny farmhouse with a concrete floor, a heater in the middle, water bottles and clothes hanging all over the place. Clearly, people sleep here.

The Free Syrian Army first emerged this summer. A colonel who had defected and claimed to be the leader released a statement on YouTube. The group now claims it has thousands of soldiers inside Syria, and varying levels of support in neighboring countries such as Lebanon, Turkey and Jordan.

The farmhouse fills up with more men. The newcomers say they're captains in the Free Syrian Army. They say attacks like the intelligence job are still rare. But they smile when we say the name Che Guevara.

Captain "Al Ali" says the group is hoping for international intervention. Ideally, they want a no-fly zone over Syria. Even though Syrian troops don't usually attack protesters from the air, he says, a no-fly zone would encourage more soldiers to defect.

"If we have a no-fly zone," he says, "the regime will fall within days."

The question is, exactly how would this happen? At the hands of this ragtag group of rebels? Or might there be some kind of coup, where high-ranking officers still inside the army force out the Syrian president and his allies?

The captains say they haven't thought that far ahead. Diplomats and analysts say a coup is the least violent option at a time when this conflict is turning bloodier and more sectarian. The majority of the protesters and the Free Syrian Army are Sunni Muslims. The regime is made up of Alawites, a sect affiliated with Shiite Muslims.

Now we are back in the car and on our way out of Syria. The rebels are talking about drinking the blood of those who've jailed and killed their friends. They show us where, just the day before, they shot at Alawite thugs known as shabiha. The word literally means ghosts.

"We'd love to stop and show you this land," one rebel says. "We'd love to turn on the lights and let you see how beautiful it is."