Accessibility links
Islamist Parties At Odds In Egypt's Ongoing Elections Early results indicate that the incoming Parliament is likely to be dominated by Islamists. But two leading Islamist blocs — the Muslim Brotherhood and the Salafists — have little in common and are doing their best to undermine each other. 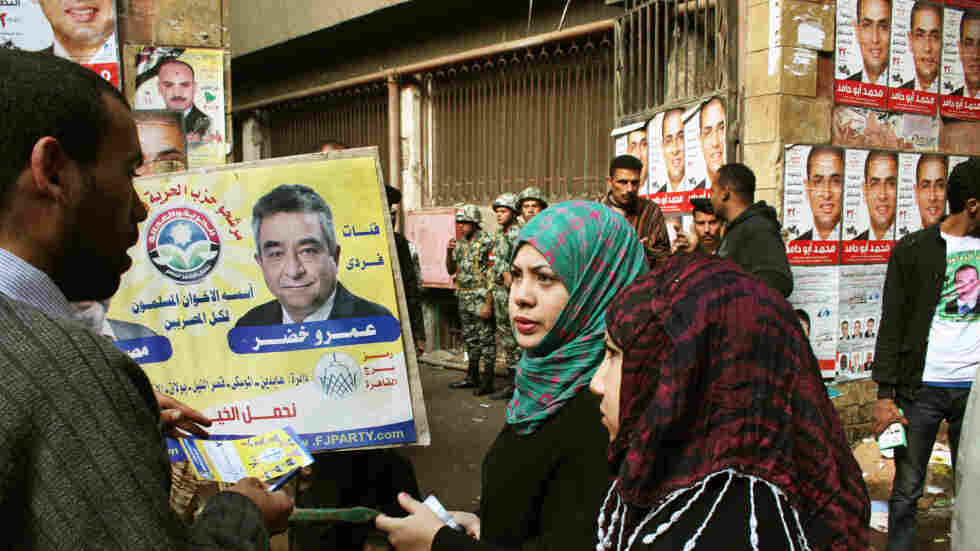 A campaigner for the Muslim Brotherhood's Freedom and Justice Party talks to voters in front of a polling station in Cairo on Nov. 28. Kyodo/Landov hide caption 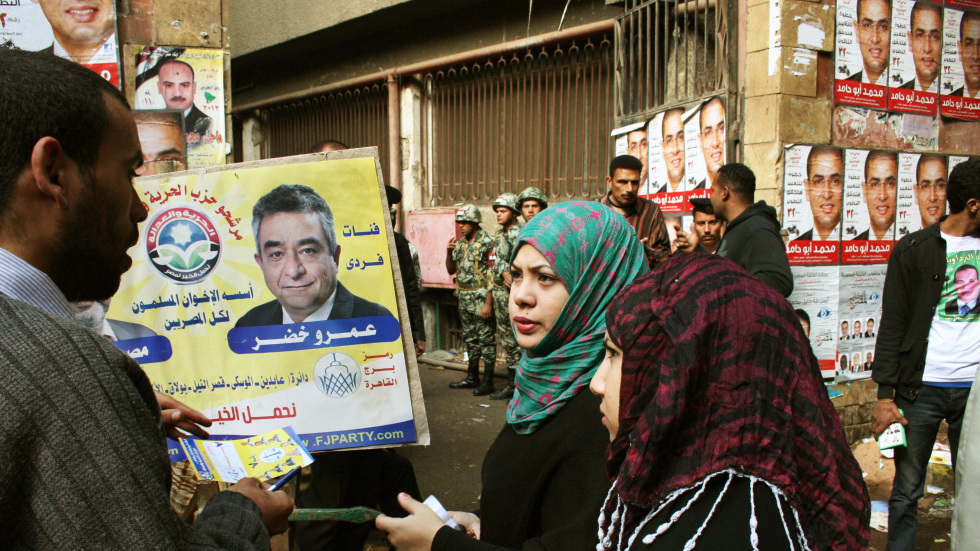 A campaigner for the Muslim Brotherhood's Freedom and Justice Party talks to voters in front of a polling station in Cairo on Nov. 28.

As the Egyptian elections roll on over the course of several more weeks, the incoming parliament looks likely to be dominated by Islamists. But the two leading Islamist blocs have little in common and are doing their best to undermine each other.

The Muslim Brotherhood and Salafists do not get along in Alexandria's working-class slum of Abu Suleiman. Outside one polling station, the tension is thick as campaign workers for each group's political party hand out fliers.

Zakareya Morshedy Mohammed, a volunteer for the Salafist party called Al-Nour, or "the light," says it's a healthy competition. Al-Nour and the Brotherhood's Freedom and Justice Party each have a candidate running for one of the seats up for grabs in this runoff vote.

That's not the case for the second seat, says Samir Mamdouh, a volunteer for the Freedom and Justice Party. He blasts his Salafist counterparts for soliciting votes for someone close to ousted president Hosni Mubarak's inner circle, who is running against the brotherhood candidate for that seat.

The former Mubarak ally is a wealthy real estate developer named Tarek Talaat Moustafa, whose posters and banners hang side by side with the Salafist ones.

Mamdouh says the fact that the Salafists are backing someone linked to the old regime proves they can't be trusted. 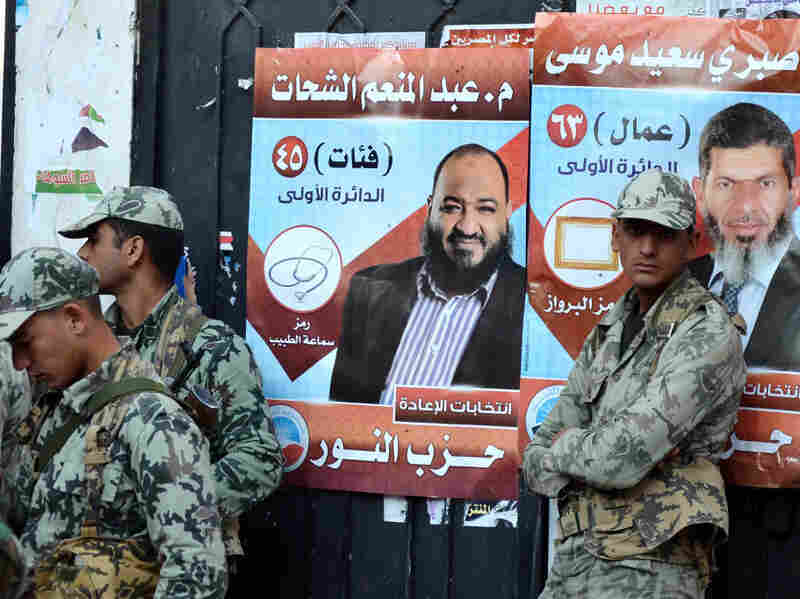 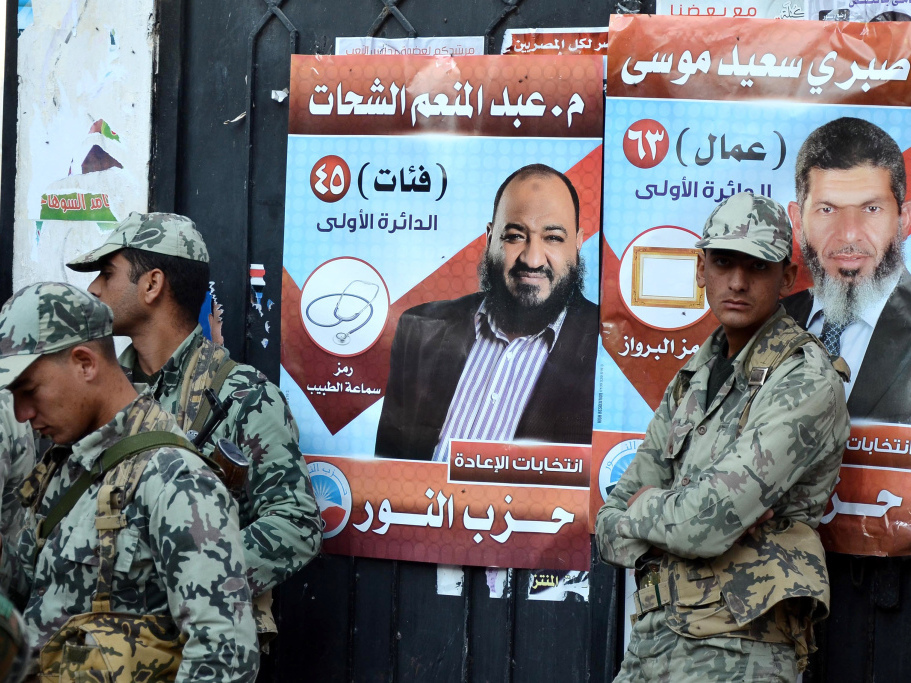 Egyptian soldiers stand in front of campaign posters for candidates from the hard-line Islamist Salafist Al-Nour party, in the coastal city of Alexandria.

Al-Nour party volunteer Elwany Mahmoud Elwany dismisses his rival's grousing as sour grapes. He says that as devout Muslims, they ought to forgive each other.

That's been hard, given that their devotion to Islam is about the only thing the brotherhood and Salafists seem to agree on, here or anywhere else in Egypt.

The brotherhood, with its decades of political experience, has steered clear of talking about its long-term goal for a more religious society in favor of more pressing issues such as Egypt's failing economy.

The Salafists, on the other hand, are political newcomers who follow a more hard-line, Saudi-influenced interpretation of Islam. Their political campaign has centered on imposing a harsher brand of Islamic law in Egypt, something that worries secular Egyptians and the Coptic Christian community.

Yet grass-roots support for these hard-liners is strong, and they ended up finishing second to the brotherhood in the first stage of parliamentary elections that began last week.

"The people who are surprised the most are the Muslim Brotherhood," says Khaled Fahmy, who chairs the history department at the American University in Cairo. "They didn't expect that they will have a Salafi opposition in Parliament."

Though both parties are Islamists, Fahmy says they have very different criteria and agendas. Based on what he has seen on TV and social media, the Muslim Brotherhood and Salafi candidates are fighting each other, he says.

It didn't start out that way, however.

In a phone interview, Sobhy Saleh, the brotherhood's top parliamentary candidate in Alexandria, says his party tried forming an alliance with the Salafists early on.

It made sense, he says, given their common history of being oppressed during the Mubarak era and shared views on strengthening the role of Islam in Egyptian society. But Saleh claims the Salafists broke off talks several months ago without explanation.

Saleh says that given growing tensions between the two sides, it's difficult to see them forming a coalition in the new Parliament, either.