The Crackling Spices Of Indian Tempering

The Crackling Spices Of Indian Tempering 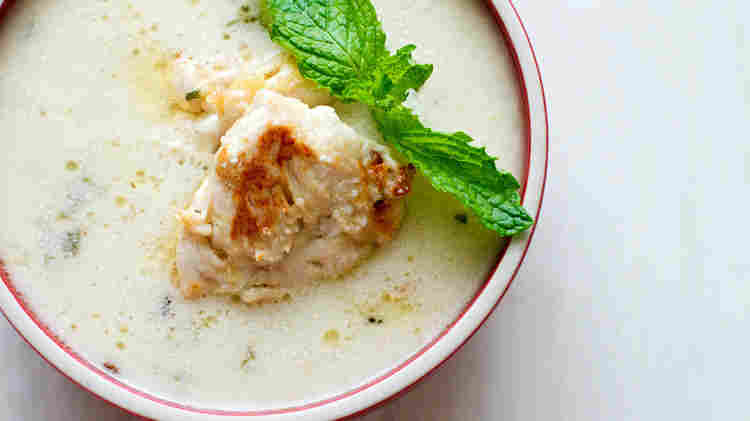 I spent eight weeks in India this summer, and most of the time I was in other people's kitchens. I took more cooking classes than I have taken in my entire life — 13, to be exact. One of the concepts repeated in every class, whether taught by chefs, home cooks or food writers, was tadka.

Hot fat has an amazing ability to extract and retain the essence, aroma and flavor of spices and herbs and then carry this essence with it when it is added to a dish.

Tadka translates as "tempering." It is a method widely used in Indian cuisine, in which whole or ground spices are heated in hot oil or ghee and the mixture is added to a dish. Hot fat has an amazing ability to extract and retain the essence, aroma and flavor of spices and herbs and then carry this essence with it when it is added to a dish. American cooks are familiar with tempering as a way of heating and cooling chocolate. No relation.

Indian tempering is done either at the beginning of the cooking process or as a final flavoring at the end. For example, when making a simple dish of rice with cumin, heat the whole cumin seeds in hot oil and then add the rice and continue cooking it. Tempering also can be used at the end of the cooking process. When making curd rice, for example, prepare the rice first and then, just before serving, temper it with seasoned ghee. I make this tadka by heating the ghee in a tiny skillet and seasoning it with crushed red chilies, garlic and mustard seeds.

An engineer turned food writer, Monica Bhide writes about food and its effect on our lives. Her work has appeared in The Washington Post, The New York Times, Food & Wine, Prevention, Cooking Light, Health and Self. Her latest book is Modern Spice: Inspired Indian Flavors for the Contemporary Kitchen (Simon & Schuster). Read more at her website.

"Tempering also has nutritional benefits, since the hot ghee or vegetable oil helps the spices unlock their healing properties," Mumbai-based food writer and cooking teacher Rushina Munshaw Ghildiyal told students in a class specifically on tadka. She also told us that tadkas vary depending on the area of origin, reflecting the use of local spices. For example, there's more cumin in the north and more curry leaves in the south. In addition to showing us the typical tempering ingredients, she used some unusual techniques in her tempering, such as adding hot oil to already roasted spices, which really helped transform dishes from mundane to magical.

One student asked if tadka could be prepared in advance and stored in the refrigerator, like compound butter, to be used later. "Absolutely not," Ghildiyal answered. "If you do that, you may get the taste, but the aroma that is such an important part of the tadka will be totally lost."

Experience has taught me not to use olive oil for a tadka. Olive oil breaks down at high temperatures, and for a successful tadka, the oil should be very hot. So I recommend neutral oils (such as a vegetable oil or grapeseed oil) or clarified butter for preparing a tadka.

Indians love their tadka and find ways to incorporate it as the new and upwardly mobile India voraciously embraces new cuisines (Italian seems to be the new Indian).

When I was in India, my cousin called to ask what time I'd be over for dinner. I said around 9 p.m.

"Great. That will give me enough time to get the pasta ready for dinner, and then when you show up, we can add the tadka," she says.

That night, she heated some clarified butter, seasoned it with garlic and broken red chilies and poured it over her spaghetti with meat sauce. It was a dish that would make any Italian (or Indian) grandmother proud.

Chaas (also called mattha) is a savory dairy drink enjoyed all over India. In this instance, it is made by thinning yogurt with a little bit of water. This recipe was adapted from one by Rushina Munshaw Ghildiyal. 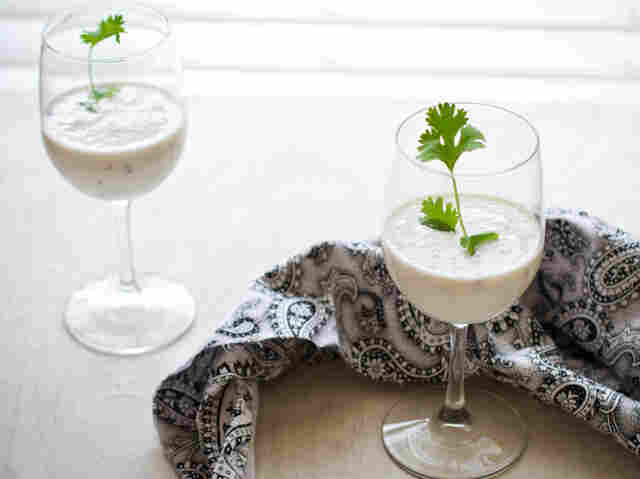 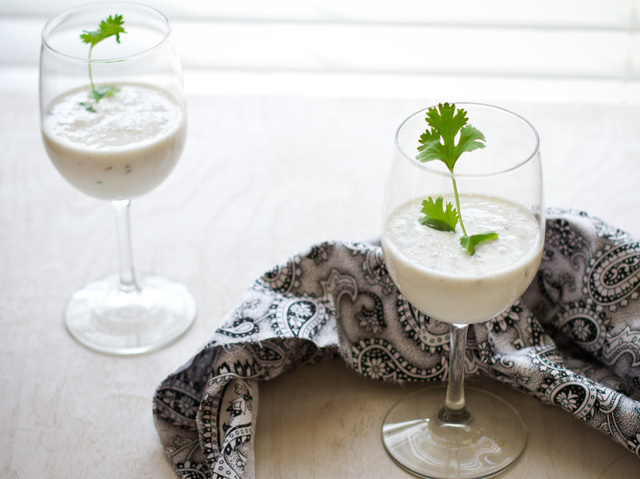 1/2 teaspoon salt, or to taste

Whisk the yogurt with the water until smooth. Add the ground cumin, chile, ginger and salt and mix well. Pour into four glasses.

To make the tadka, heat the ghee in a small pan until it shimmers. Add the cumin seeds. When the cumin darkens and gets aromatic, add the garlic. When the garlic starts getting golden at the edges, add the chili. Fry until the chili begins to darken but not burn.

Pour the tadka over each portion. Serve garnished with the chopped mint and cilantro.

This recipe was adapted from one by Indian cooking teacher Rushina Munshaw Ghildiyal. Serve it with crusty bread and a green salad. 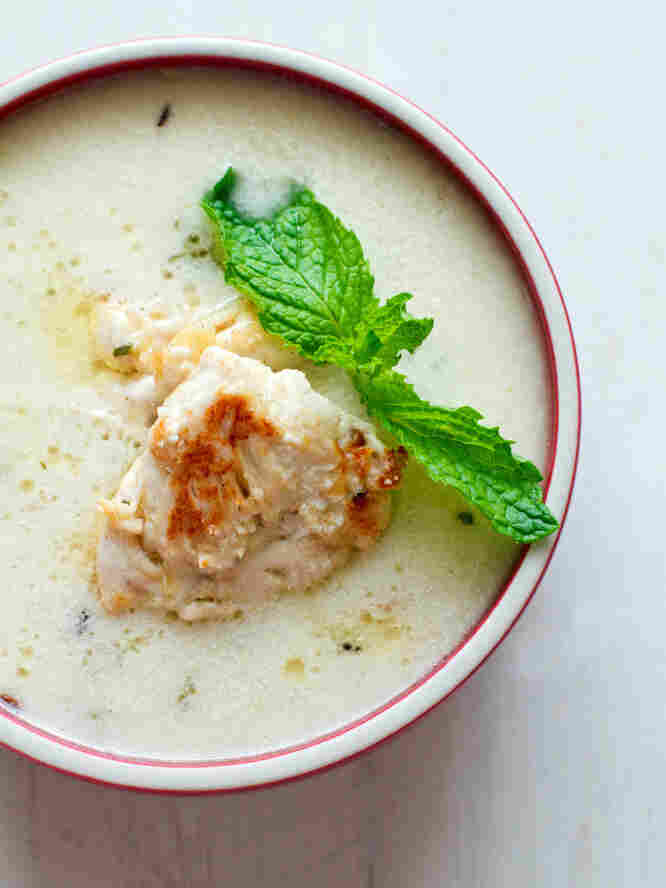 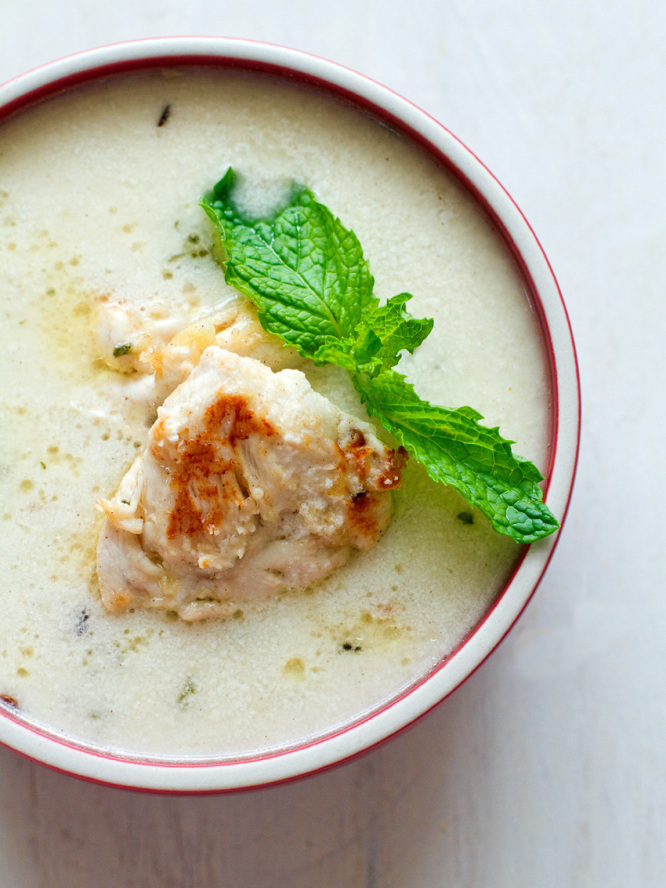 1 tablespoon cornstarch dissolved into a paste in a little water

Whisk the yogurt with the water until smooth. Add the ground cumin, minced chili, ginger and salt and mix well. Taste and adjust seasoning. Set aside near the stove.

To make the tadka, heat the ghee in a small pan until it shimmers. Add the cumin seeds. When the cumin darkens and gets aromatic, add the garlic. When the garlic starts getting golden at the edges, add the chili. Fry until the chile begins to darken but not burn. Pour this flavored ghee over the yogurt mixture.

Cook the chicken slowly, using some of the yogurt mixture to baste it, until cooked through.

Meanwhile add the cornstarch paste to the simmering yogurt and stir in well. It will thicken quickly to the consistency of a white sauce.

When chicken begins to get golden brown and crisp at the edges, return it to the yogurt sauce and stir well to coat.

Sprinkle with the mint and cilantro and serve.

The tempering method here is a little different from the others: Indian cooking teacher Rushina Munshaw Ghildiyal heats the oil first and then pours it over the already toasted spices. The result is an excellent potato dish with a lovely crunch of sesame. Rushina said she thought anna rascalla, or "rascal man" — a term widely associated with the popular South Indian actor Rajnikanth's films — an appropriate name for a spice blend inspired by ingredients traditionally used to temper a South Indian stew but which brings a magical flavor even to simple potato wedges. 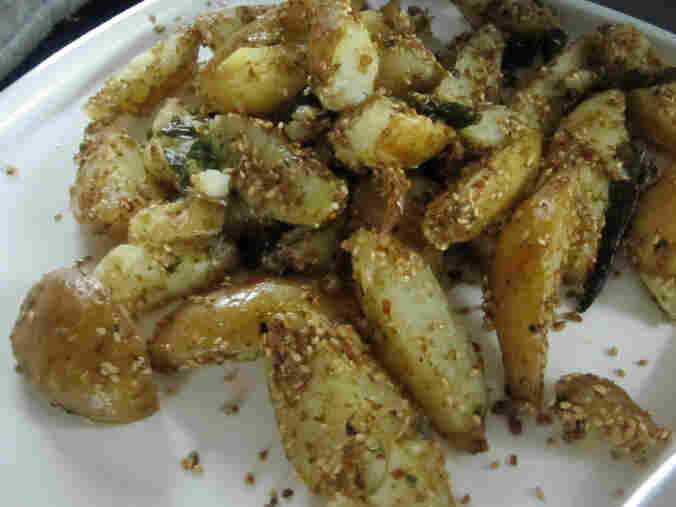 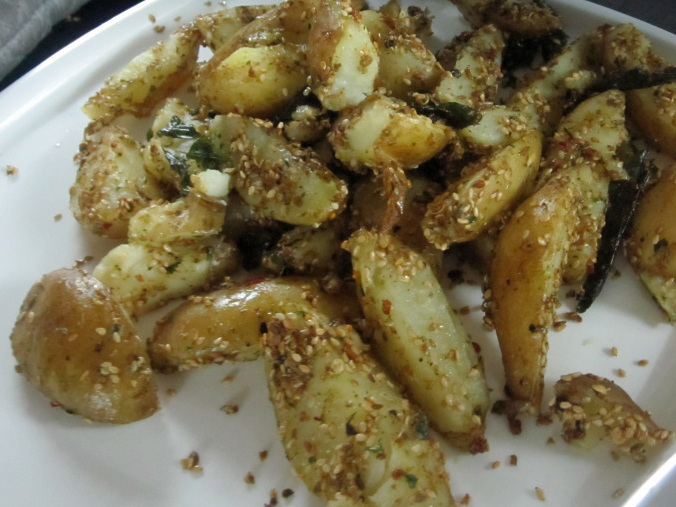 Makes about 1/2 cup masala (spice mix), and 4 to 6 servings potatoes

2 1/4 pounds potatoes, such as Yukon gold, skin on, scrubbed well

To make the masala, toast the curry leaves in a dry skillet until they curl up, turn olive green and become brittle and aromatic. Transfer to a bowl to cool.

Toast the fenugreek, coriander, cumin and chilies individually until each darkens in color slightly and releases its aroma. Set aside separately to cool.

Put the potatoes in a saucepan and cover with cold water. Add salt and bring to a boil. Simmer until almost tender, then drain and cool.

Preheat the oven to 400 degrees. Line a baking sheet with parchment paper.

Cut the potatoes into large wedges and place in a large bowl. Stir in the garlic.

In a smaller heatproof bowl, combine 3 tablespoons of the masala and the amchur. In a small pan, heat the sesame oil until quite hot. Stir it into the masala mixture. Pour the resulting paste over the potato wedges and toss to coat them well. Spread the potatoes in a single layer on the baking sheet. Bake for about 30 minutes, turning the wedges once or twice, until golden brown and crisp on the outside and cooked all the way through on the inside. Serve hot from the oven.

Traditional lentil soups in India are made with lentils, onions, tomatoes and a large array of spices, then topped with a tadka of another array of spices. While they are rewarding in taste, they are too time-consuming for weeknights because most lentils take a long time to cook. When I discovered cannellini beans, I knew I had a solution. When I first served this soup to my mom, she tasted it begrudgingly — cannellini beans are not something she is familiar with. But, she had to admit, it was love at first sip, especially since the flaming red of the deghi mirch (a red chili that provides color but not heat) and the smell of the clarified butter made it taste like home. This soup is from my book Modern Spice (Simon & Schuster, 2009). 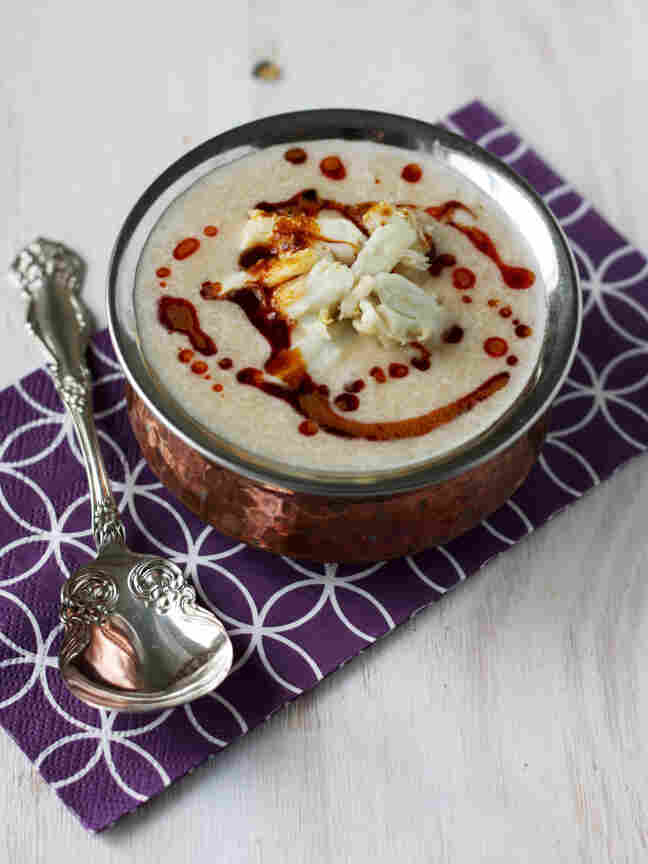 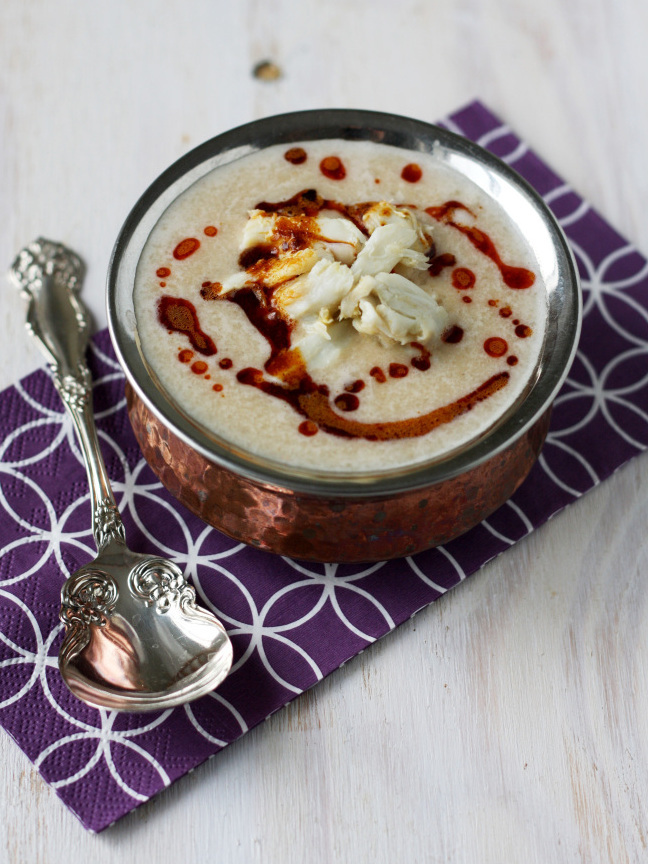 For the soup, heat the butter in a medium saucepan over medium heat. Add the garlic and onions. Saute for about 10 minutes, or until transparent and soft. Add the beans and cook another 5 minutes. Add the broth and simmer for 15 minutes.

Remove from the heat and allow to cool to room temperature. Working in batches if necessary, puree in a blender until smooth. (If you prefer a really smooth soup, pass the puree through a strainer.) Return the soup to a clean saucepan and stir in the heavy cream. Check the seasoning and adjust as necessary with salt and pepper. Reheat the soup to a gentle simmer.

Ladle the soup into serving bowls and top each with an equal amount of crab.

To make the tadka, in a small pan, heat the ghee on medium heat until quite hot. Add the deghi mirch and red pepper flakes. Remove from heat immediately and drizzle over the soup. Serve immediately.

One of the cooking lessons I took in India was with chef Rohit Gambhir, executive chef at the Trident Hotel in Mumbai. He taught me how to make this amazing yogurt side dish. This recipe is really simple to make but the results are delightful. I have served it as a dip with vegetables and as a side with roasted chicken. 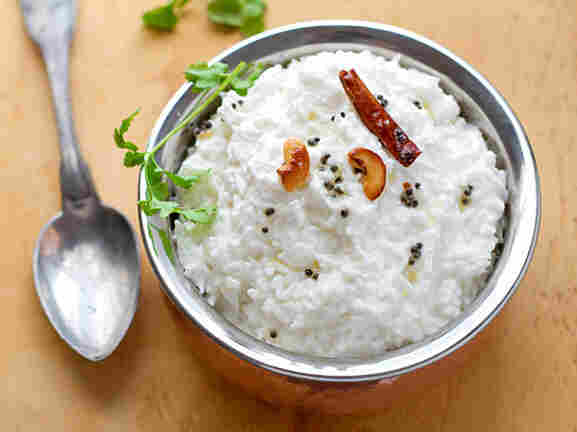 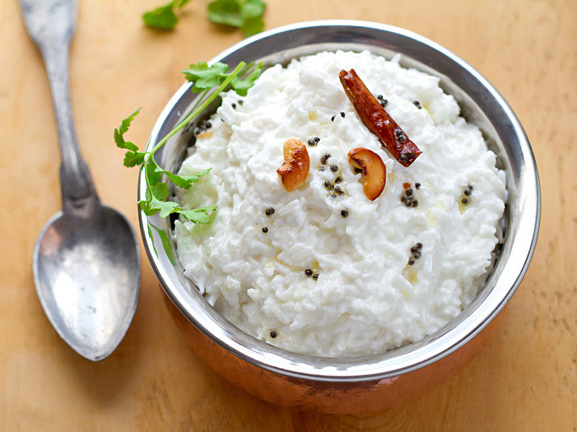 Heat the oil in a skillet until it is almost smoking. Reduce the heat to medium and add the mustard and cumin seeds, curry leaves and whole red chili. Cook until the spices crackle.

Add the onions and saute until they are golden brown. Add the ginger and green chili (if using) and saute for another minute.

Add the coriander, cayenne and turmeric and saute for 10 seconds, until they darken slightly. To prevent the spices from burning, you can add a few drops of water (since this is not the tempering stage, water is allowed).

Reduce the heat to low and add the tomatoes. Cook for 10 to 12 minutes, stirring occasionally, until the mixture is almost dry and the oil begins to separate out. Remove from the heat and allow to cool to room temperature.

Add the yogurt to the onion-tomato mixture and mix well. Season with salt. If the flavor is too tart, stir in a little sugar, up to 1 tablespoon. (You don't want to make the yogurt sweet, just to balance the sourness.) Sprinkle with the chopped cilantro and serve.