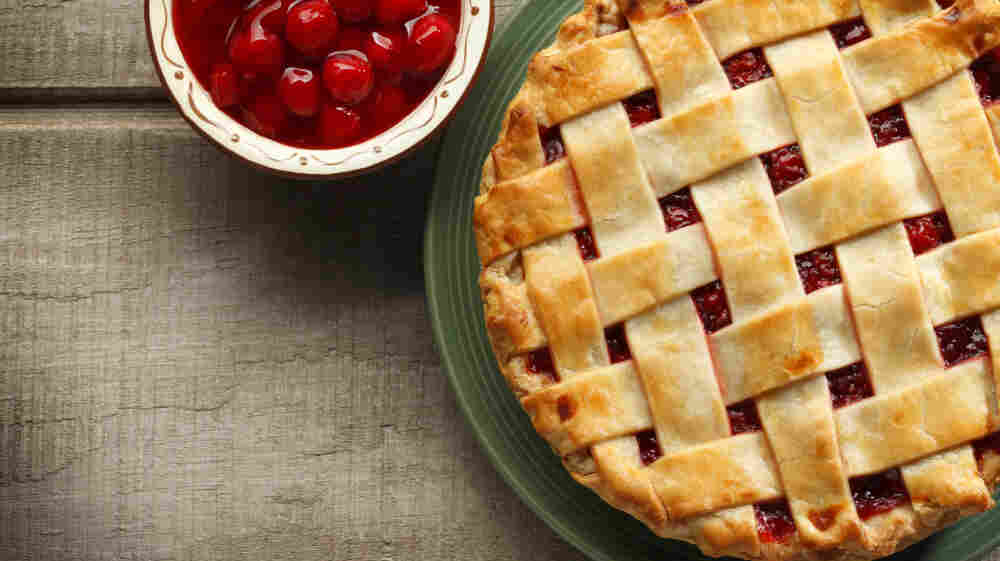 Want the perfect pie crust? Christopher Kimball from America's Test Kitchen says the secret is to substitute half of the recipe's water with vodka, for a dry, flaky crust. iStockphoto.com hide caption

The mission of America's Test Kitchen is simple: to make "recipes that work." The syndicated PBS cooking show, hosted by Christopher Kimball, simplifies recipes in ways that home chefs can easily replicate with a fairly high degree of success. 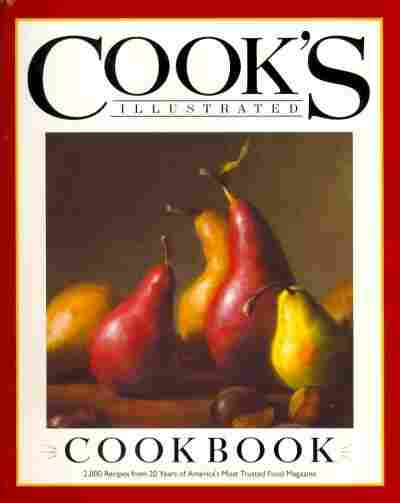 2,000 Recipes from 20 Years of America's Most Trusted Cooking Magazine

"We bring people into our kitchen and watch people cook our recipes and send our recipes out by email, and we know that what people do with those recipes bears little resemblance to what we do with them," says Kimball. "For example, they will substitute ingredients with great abandon. They will never read the recipe ahead of time."

Kimball remembers a chicken recipe from several years ago. One man wrote in to say it was the worst chicken recipe he'd ever made. Turns out, the man didn't have chicken in the house, so he'd substituted shrimp.

"Well, 40 minutes of cooking shrimp in a skillet is simply not going to come out very well," Kimball says. "And guess whose fault that was? Mine. So most of recipe writing is what the person at home is going to do to your recipe. It's not whether you can make it in your test kitchen."

Kimball is also the founder, editor and publisher of Cook's Illustrated Magazine. More than 2,000 recipes from the magazine are collected in The Cook's Illustrated Cookbook. On Wednesday's Fresh Air, Kimball and his Test Kitchen colleague Bridget Lancaster highlight some of their favorite kitchen shortcuts and cooking techniques:

On turkey: Cooking turkey is fraught with peril, Lancaster says — all sorts of things can go wrong. She recommends either brining the bird before cooking — by placing it in a salt and water solution for a few hours — or dissecting the bird ahead of time and roasting it in parts.

On minestrone soup: Need an easy way to make minestrone soup broth? Use V8, says Lancaster: "Somebody just mentioned, 'Why don't we try V8, like the commercial says?' And V8 was perfect. It gave just the right body to the minestrone, the right seasoning. It was an 8-for-1 instead of a 2-for-1 ingredient, because it has all of those flavors in one shot."

(After adding the V8, Lancaster added pancetta and chicken broth to heighten the flavors. She suggests tasting as you go to see what works.)

On store-bought beef broth: Make sure to check the back of the can to make sure beef is actually listed as an ingredient. Kimball says that store-bought broths are often full of chemicals and salt. "I think the last time we rated them, Rachael Ray's beef stock won," Kimball says. "And I remember doing a blind tasting for the TV show, and I was surprised."

(Homemade tastes better but can require pounds and pounds of meat to make, so it's easier to doctor the store-bought kind.)

On using frozen peas to make pea soup: Lancaster says if you're making pea soup, don't bother with the fresh stuff — they're a pain to peel, and they might not be in season.

"[Frozen peas] are actually picked at the most fresh point," she says. "And somebody else has done all the work [of peeling] for you. And they're great, especially if you're using them as an ingredient in a stew. The key is to add them almost as an herb right at the end, and to let them sit in the soup or a risotto for just five minutes to warm them up."

(Kimball adds that canned tomatoes and frozen blueberries can also be substitutes for the fresh stuff — and sometimes taste better, depending on the season.)

On poaching salmon: Salmon is expensive, and if you poach the entire fillet in water, it can wind up with very little flavor, says Lancaster. She recommends adding lemons to the bottom of a pan so that you're only partially submerging the fish in the poaching liquid. Also, try adding wine and herbs to the poaching liquid to lower its boiling point — in order to build a fish with more complex flavors. "It's pretty darn amazing," she says. "And flavorful, which you never get with poached salmon." 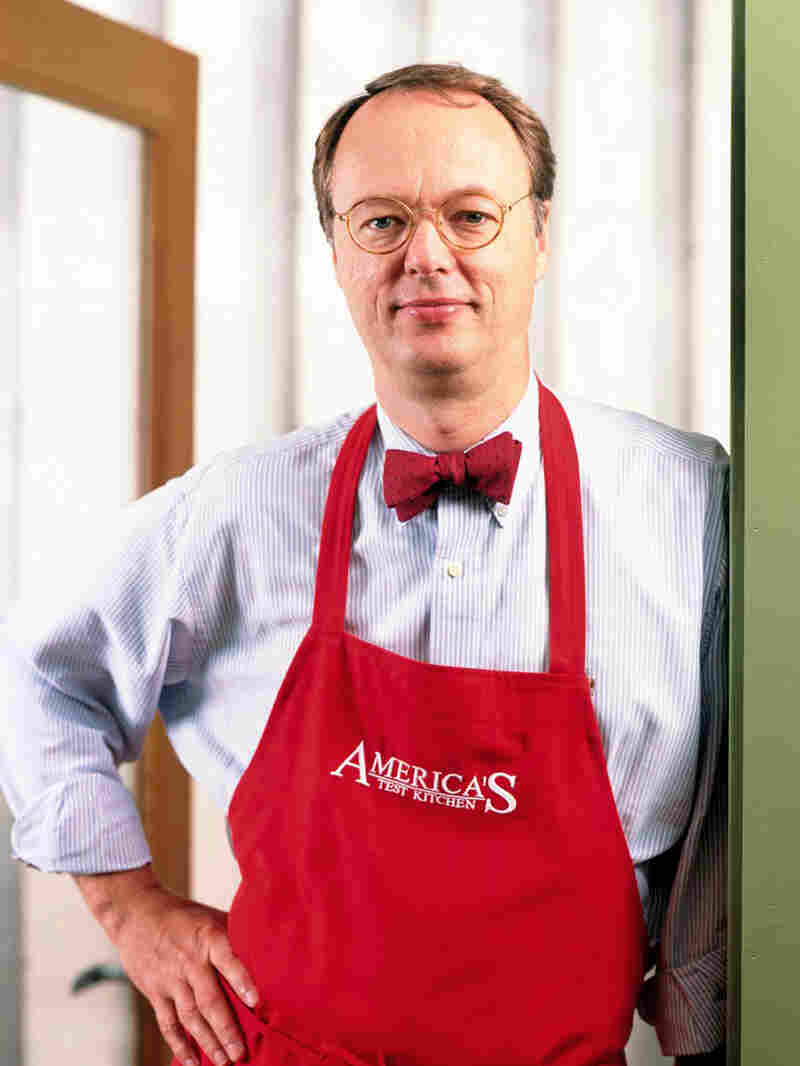 Chris Kimball is the founder and editor of Cook's Illustrated and the host of the PBS cooking show America's Test Kitchen. AP/Keller and Keller hide caption 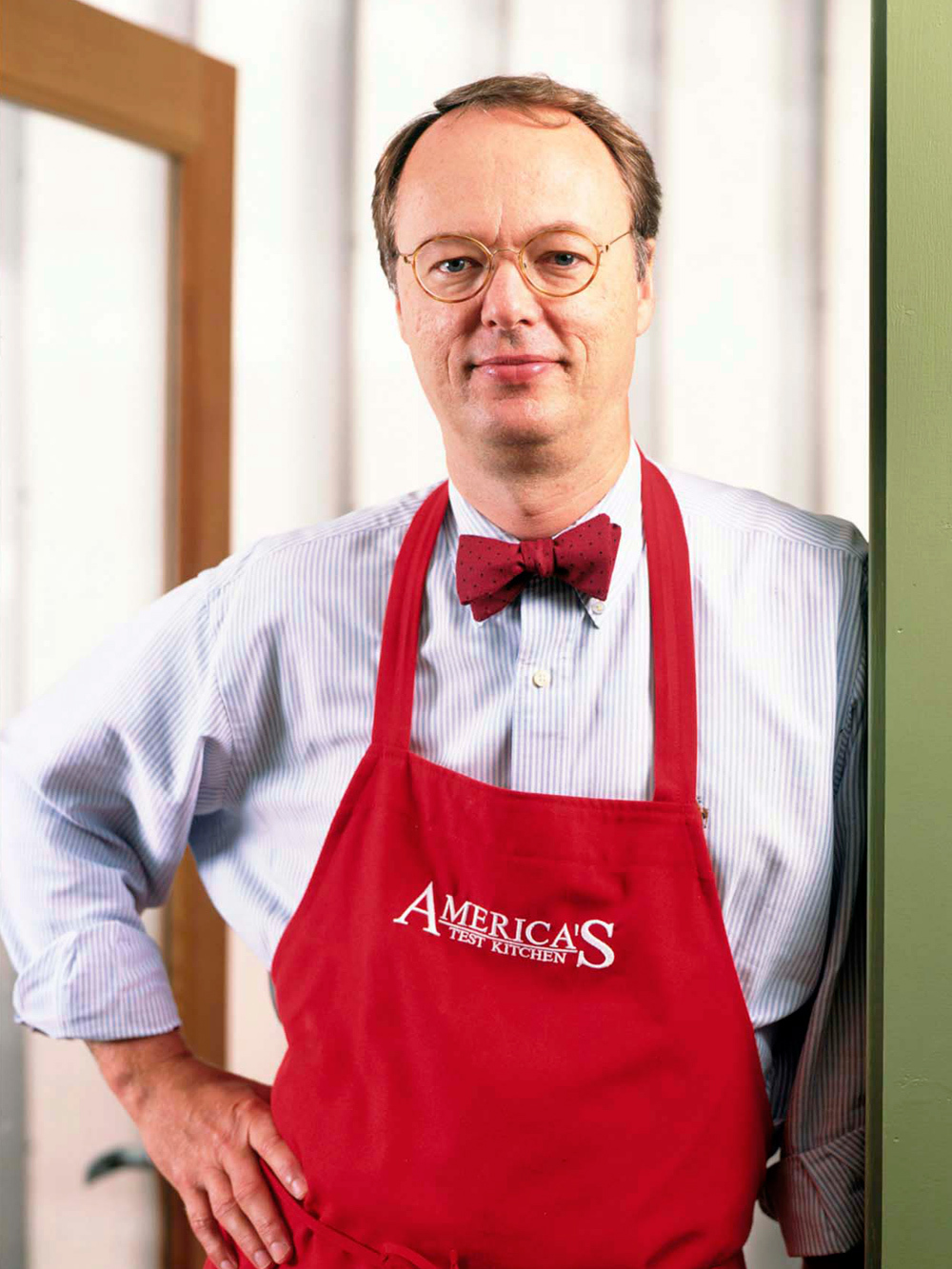 Chris Kimball is the founder and editor of Cook's Illustrated and the host of the PBS cooking show America's Test Kitchen.

On the best pie crust ever: Kimball recommends substituting vodka for half of the water used in your recipe. "You end up using more total liquid [with this method]," he says. "When you bake it, half of the vodka, which is one-quarter of the total liquid, is alcohol, and almost all of that dissipates in the heat of the oven. So you end up with a dry, flaky dough, which you can also roll out."

On one of the biggest mistakes made in the Test Kitchen: Kimball says you should never put a hot glass casserole dish on a wet countertop. Why not? He says it can break into about a thousand pieces. Lancaster adds that one incident with a roux, a glass container and a wet countertop once left the Test Kitchen looking like a scene from Lethal Weapon. "Test cooks were diving across the counter to get away from it," she says.

On working in the Test Kitchen: Think working in a test kitchen and tasting food all day would be enjoyable? It is, but there are downsides to the job — like the "five-pound-a-year rule," which is how much weight the typical test chef gains in a year. And then there are the constant tastings.

"One of the worst things was brownie tastings," says Lancaster. "Because, of course, you don't just have to taste them, you have to feed on them all day. One of the test cooks that works there, she and I counted up the calories we consume in one day. And it was frightening."

This recipe works best with either a metal colander that sits easily in a Dutch oven or a large pasta pot with a steamer insert. To prevent excess evaporation, it is important for the lid to fit as snugly as possible over the colander or steamer. A steamer basket will work, but you will have to transfer the hot potatoes out of the basket to rinse them off halfway through cooking. For the lightest, fluffiest texture, use a ricer. A food mill is the next best alternative. Russets and white potatoes will work in this recipe, but avoid red-skinned potatoes.

1. Place metal colander or steamer insert in large pot or Dutch oven. Add enough water for it to barely reach bottom of colander. Turn heat to high and bring water to boil. Add potatoes, cover, and reduce heat to medium-high. Cook potatoes 10 minutes. Transfer colander to sink and rinse potatoes under cold water until no longer hot, 1 to 2 minutes. Return colander and potatoes to pot, cover, and continue to cook until potatoes are soft and tip of paring knife inserted into potato meets no resistance, 10 to 15 minutes longer. Pour off water from Dutch oven.

Use a large, rimmed baking sheet, such as a jelly-roll pan, that is shallow enough to promote browning, yet tall enough (at least 3⁄4 inch in height) to contain the rendered bacon fat. To save time, you can add the bacon to the oven before it reaches 400 degrees, but exact cooking time will vary from oven to oven. If cooking more than one tray of bacon, exchange their oven positions once about halfway through the cooking process.

1. Adjust oven rack to middle position and heat oven to 400 degrees. Arrange bacon slices in a large jelly-roll pan or other shallow baking pan. Roast until fat begins to render, 5 to 6 minutes; rotate pan front-to-back. Continue roasting until crisp and brown, 5 to 6 minutes longer for thin-sliced bacon, 8 to 10 minutes for thick-cut. Transfer with tongs to paper towel–lined plate, drain and serve.

Note: Be sure to use very ripe, heavily speckled (or even black) bananas in this recipe. This recipe can be made using 5 thawed frozen bananas; since they release a lot of liquid naturally, they can bypass the microwaving in step 2 and go directly into the fine-mesh strainer. Do not use a thawed frozen banana in step 4; it will be too soft to slice. Instead, simply sprinkle the top of the loaf with sugar. The test kitchen's preferred loaf pan measures 8 1/2 by 4 1/2 inches; if you use a 9 by 5-inch loaf pan, start checking for doneness five minutes earlier than advised in the recipe. The texture is best when the loaf is eaten fresh, but it can be stored (cool completely first), covered tightly with plastic wrap, for up to 3 days.

2. Place 5 bananas in microwave-safe bowl; cover with plastic wrap and cut several steam vents in plastic with paring knife. Microwave on high power until bananas are soft and have released liquid, about 5 minutes. Transfer bananas to fine-mesh strainer placed over medium bowl and allow to drain, stirring occasionally, 15 minutes (you should have 1/2 to 3/4 cup liquid).

3. Transfer liquid to medium saucepan and cook over medium-high heat until reduced to 1/4 cup, about 5 minutes. Remove pan from heat, stir reduced liquid into bananas, and mash with potato masher until fairly smooth. Whisk in butter, eggs, brown sugar, and vanilla.

4. Pour banana mixture into flour mixture and stir until just combined with some streaks of flour remaining. Gently fold in walnuts, if using. Scrape batter into prepared pan. Slice remaining banana diagonally into 1/4-inch-thick slices. Shingle banana slices on top of either side of loaf, leaving 1 1/2-inch-wide space down center to ensure even rise. Sprinkle granulated sugar evenly over loaf.

5. Bake until toothpick inserted in center of loaf comes out clean, 55 to 75 minutes. Cool bread in pan on wire rack 15 minutes, then remove loaf from pan and continue to cool on wire rack. Serve warm or at room temperature.