Accessibility links
'Occupy': Geoff Nunberg's 2011 Word Of The Year Fresh Air's resident linguist explains how the magic of metonymy gave "occupy" its symbolism — and how the word implies a culture that made a bunch of protests feel like a movement. 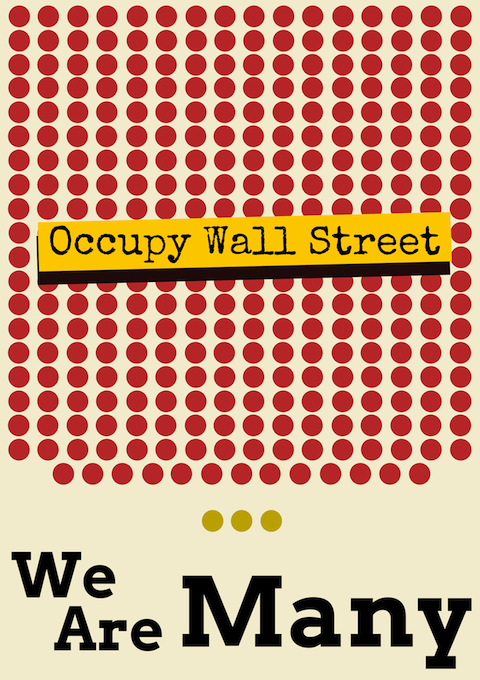 If the word of the year is supposed to be an item that has actually shaped the perception of important events, I can't see going with anything but occupy. It was a late entry, but since mid-September it has gone viral and global. Just scan the thousands of hashtags and Facebook pages that begin with the word: Occupy Wall Street, Occupy Slovakia. Occupy Saskatoon, Sesame Street, the Constitution. Occupy the hood.

The word itself can take credit for a lot of its success — this isn't an item like "debt ceiling," which just happened to be hitched to a big story. But give props to the magic of metonymy, too. That's the figure of speech that lets us use names like Wall Street, Hollywood or Seventh Avenue to refer to the things that go on there.

Wall Street is particularly suited to actions that exploit its double meaning. It's a compact place where it's easy to generate symbolically charged confrontations. Those yuppie types with champagne glasses chuckling at the demonstrators from a terrace, the midnight police sweeps, the phalanx of officers in their Robocop gear in front of the Brown Brothers Harriman building — it was as if everybody had stepped out of a political cartoon from a Depression-era copy of the New Masses. Nothing was only itself.

Now, it's true the protesters weren't really occupying Wall Street in the old sense, taking it over the way workers in the 1930s occupied a factory or students in the '60s occupied the dean's office. This is a new meaning of the verb, for a form of protest adapted to the age of smartphones and Twitter, not to mention REI. Once the new occupy grew capital letters, you could export it to places that had no direct connection to finance, as franchises of the original: Occupy Oakland, like Macy's San Francisco. They could have just been called protests, but it wouldn't have felt as much like a movement.

The movement came with its own culture too, just a few subway stops from the national media. It gave color to the story, as reporters turned ethnographers returned from the field with reports of the people's microphone, the jazz-hand finger-flutters, and the drum circles. It was street theater, or a dinner party with paper plates, or an exercise in constructive group dynamics, or a reprise of Woodstock or of the Bonus Marchers of 1932. The occupiers were romantics, holy fools, anarchists. Or they were an incoherent mob of dirty hippies — and with iPads, moreover. I make "dirty hippie" a strong candidate for comeback word of the year. It would have vanished from the language years ago if it hadn't been kept on life support on South Park.

Whatever the movement is, it isn't a wing of electoral politics. People talk about Tea Party Republicans, but nobody's tempted to talk about Occupy Democrats. But it has revived the culture of protest among the young and on the left. As protests go, occupying is high maintenance and seasonal, and the movement might have a different form and name five years from now. But it has already altered the political language with that slogan "We are the 99 percent." Economists have been talking about the top 1 percent for a long time, but it has suddenly become part of our national table talk. It's the most specific term for class in American public life since the late 19th century, when social reformers warned about the undue power and influence of what they called "the upper tenth."

The rise of the 1-percenter talk has left the right uncharacteristically defensive and nonplused. Some Republicans have raised the familiar charge of class warfare. Newt Gingrich called the 99-1 concept un-American and divisive, and he warned against attacking the very people you hope will create jobs. But the polls show that a large majority of Americans are concerned about income inequality, whether or not they're sympathetic to the occupiers themselves.

And talking about "the 1 percent" has its advantages. It seems to put things on an objective basis and strips away the vagueness and the emotional overtones that go with talking about "the rich." It has caught the public fancy, too. Even the Wall Street Journal has gotten into the game with a Web page that lets readers calculate their income percentile from 1 to 100. (What, only 98.7?)

And Republicans themselves have been using the phrase, if not always comfortably. Mitt Romney initially described the Wall Street protests as dangerous class warfare. Then he thought better of it and said he understood how the protesters felt, and that he worried about the 99 percent in America, not the 1 percent.

I was struck by a Thanksgiving op-ed in The Washington Times that said "The so-called '99 percent' have never had it so good." The phrase doesn't make a lot of literal sense — what else would you call them? But it suggests the right's frustration. "So-called" is what people say when they've lost control of the conversation and have to use the other's guy's language, like the liberals who talk about "so-called family values."

So why not make "the 99 percent" itself the word of the year? Well, for one thing, occupy is that rare linguistic phenomenon, a word that bubbles up out of nowhere and actually helps to create the very thing it names. And anyway, "the 99 percent" wouldn't be part of our political discussions if occupy hadn't gotten there first.