Accessibility links
The 'Codebreaker' Who Made Midway Victory Possible A turning point in World War II came in June 1942, when the U.S. surprised and defeated the Japanese in the Battle of Midway. That victory was possible, in large part, because of the work of a little-known naval codebreaker named Joe Rochefort. Elliot Carlson tells his story in Joe Rochefort's War. 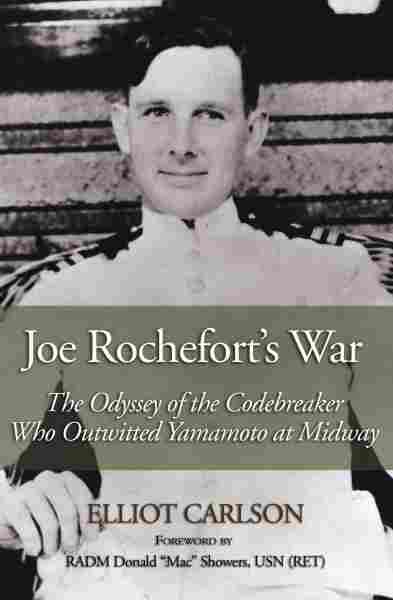 The Odyssey of the Codebreaker Who Outwitted Yamamoto at Midway

by Elliot Carlson and Donald Showers

The attack on Pearl Harbor 70 years ago set in motion a series of battles in the Pacific between the Japanese and the United States. The turning point in the Pacific came in June 1942, when the U.S. surprised and defeated the Japanese fleet in the Battle of Midway.

That victory was possible, in large part, because of the work of a little-known naval codebreaker named Joe Rochefort. Rochefort, responsible for the Pacific Fleet's radio intelligence unit at the time of the Pearl Harbor attack, felt immense guilt at his failure to predict it.

His work deciphering codes over the subsequent six months revealed the details of the next Japanese offensive against the Hawaiian islands.

On June 4, 1942, armed with information from Rochefort and his team, American planes caught the Japanese by surprise and won the decisive battle in the Pacific.

NPR's Neal Conan speaks with journalist and historian Elliot Carlson, whose book, Joe Rochefort's War: The Odyssey of the Codebreaker Who Outwitted Yamamoto at Midway, gives an in-depth account of Rochefort's life and career in the Navy, his unsuccessful efforts to find the Japanese fleet before Pearl Harbor and, ultimately, his redemption at Midway.

On the Navy's failure to predict the Pearl Harbor attack

"The fact of the matter is you can't track ships that do not emit signals. And the Japanese striking force that left the Kure Isles on Nov. 25 emitted no signals. Rochefort was not asleep at the switch. He was watching the situation in the South China Sea where a totally different Japanese force was assembling to move down to Malaya, Singapore and points south, Borneo and so forth.

"And he informed Washington and [Adm. Husband] Kimmel [commander of the U.S. Pacific Fleet] about what he saw there, and that's where he thought the Japanese would put their main strike. And he had every reason to think so. There had been no clues that the — no radio signal clues that the Japanese carriers had moved out of the Inland Sea."

On the breakdown in naval communications prior to the attack

"There were divisions of labor and conflicts between Office of Naval Intelligence, which actually had nothing to do with code breaking, and Naval Communications, which ran code breaking. And then, there were divisions of conflicts within communications. So it was sort of like today. In fact, writing this book, it kind of reminded me of 9/11 in some ways — that things never change bureaucratically. You still have these turf battles. But the job to break JN25 [the Japanese naval code] had been assigned to the Philippines, Station CAST in Manila.

"And some of the work was also being done in Washington on a research basis but not reading current traffic. By Dec. 7, JN25 consisted of 50,000 code groups. And by Dec. 7th, about 2,000 had been compromised, by no means enough to read any messages."

More On The 70th Anniversary Of Pearl Harbor

On the characterization of Rochefort as a brash eccentric

"The people who knew Rochefort just hated that characterization. They said it was totally false, that Rochefort was not the loudmouthed, wisecracking, cigar-chomping, sloppy guy who wandered around Pearl Harbor in a smoking jacket. Rochefort, in fact, was a total aristocratic, quiet, soft-spoken guy who did have a very acerbic wit, a withering sense of humor that he would direct at those who were his adversaries. But he wasn't the loudmouthed redneck we see Hal Holbrook play. And they resented that characterization very strongly, that it didn't do him justice. He was, in fact, a very different kind of gentleman."

On Adm. Ernest King's denying Rochefort the Navy's Distinguished Service Medal after the Battle of Midway

"King [denied the award] on the recommendation of his staff. His staff was made up of people who knew Rochefort and actually despised him for all kinds of different reasons. ... He did not suffer fools lightly. And the chief of staff for King was a guy named Russell Wilson, who Rochefort encountered on the battleship Pennsylvania many years earlier. And Rochefort thought he was a stuffed shirt, and he conveyed this to him in various ways. Now, Rochefort's friends warned him that you can't talk to people that way. These people are going to be pretty important someday, and they turned out to be pretty important someday.

"And so Russell Wilson recommended against the medal, along with the influence of the Redman brothers, who were Rochefort's immediate bosses, who felt as though Rochefort had ignored them and gone around their backs, made them look bad, and they were jealous. So all these factors played in to Rochefort being ousted. And King tended to trust his immediate advisers. King, actually, was amazingly confident ... [but] he followed the advice of his advisers."

On Rochefort finally being awarded the medal posthumously

"It was the result of ... almost a 20-year or 30-year campaign that started shortly after World War II had ended. It was begun by one of his intelligence officers and picked up in 1980s by Adm. D. "Mac" Showers, who worked for the CIA guy, [William] Casey. Actually, he had a lot of clout. And also, he was a colleague of [John] Lehman's, secretary of the Navy. So Showers brought the muscle after this project that resulted in Rochefort getting the DSM 10 years after his death."