Accessibility links
With This Sitter, The Kids Are Better Off Alone A selfish slacker (Jonah Hill) finds himself baby-sitting some nightmare kids — on a night where he'd rather be out with a girl. Andrew Lapin says comedy, like baby-sitting, is clearly harder than it looks.

With This Sitter, The Kids Are Better Off Alone

With This Sitter, The Kids Are Better Off Alone 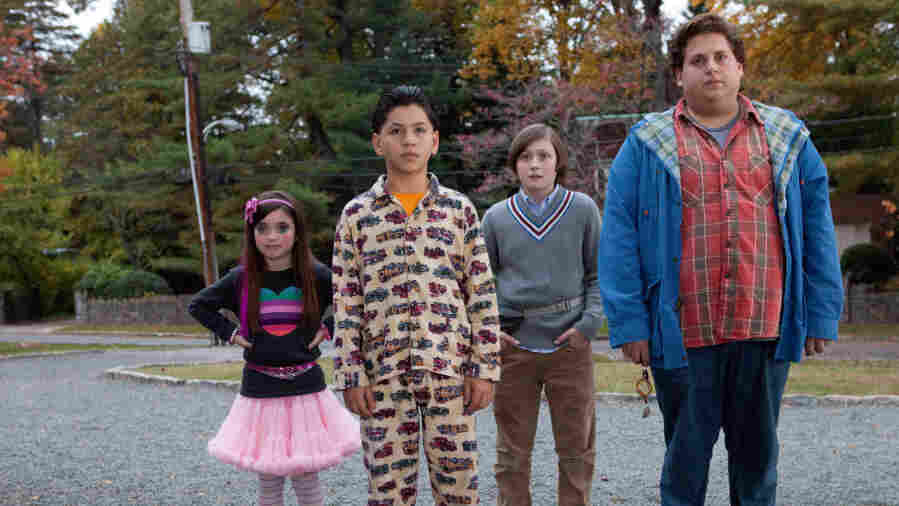 Rated R for crude and sexual content, pervasive language and some violence

From 'The Sitter' - 'I'm Not A Real Babysitter'

'I'm Not A Real Babysitter'

From 'The Sitter' - 'That's Pretty Weird'

From 'The Sitter' - 'I Just Want To Be Your Friend'

'I Just Want To Be Your Friend'

Jonah Hill, Hollywood's go-to blubbering slacker, tries to pick up some easy money in The Sitter. It looks like a plush job: Hang out with kids, say some dirty things, learn some life lessons, pocket the cash. The film could be called Don't Tell Mom the Baby Sitter's Dead Inside.

Except baby-sitting is harder than it looks, and so is comedy — even in a movie this inconsequential. Hill's trademark verbal hyperactivity never truly breaks through a script that's way more complicated than it needs to be, what with kickboxers, exploding toilets, stolen drugs, two stolen cars, a love triangle and a Bat Mitzvah caper. And still none of it is inherently funny — as evidenced by how many scenes depend for a punchline on Hill swearing at one child or another.

Hill's deeply insecure Noah has volunteered to watch three deeply insecure kids for one night. Each youngster has generously been given one personality trait. There's Slater, a shy, confused preteen who seems like he'd bruise easily. (He's played by Max Records, who previously acted as guardian to 8-foot creatures in Where the Wild Things Are, and whose reduction to panicky-prop status seems like a regression in more ways than one.)

We also get the heavily made-up Blithe (Landry Bender), who according to her mother is "in her celebutante phase"; and Rodrigo (Kevin Hernandez), an adopted Latino pyromaniac.

The siblings all exist inside their own bubbles, spouting their own one-liners, never hinting that they knew each other before Noah came over. The film's adults are the same way, although since they mostly consist of drug dealers, coked-out girlfriends and emotionally unavailable parents, this seems a little more plausible. There's a message somewhere about the devastating consequences of unhappy childhoods, but it's buried so deeply not even the movie knows what it is.

The Sitter is nothing if not economical. In a mere 81 minutes, Noah solves all of his charges' most closely guarded psychological problems, as well as his own and those of several other acquaintances he happens to run into. (Slow down, Noah. You're charging by the hour. Save some of the family issues for next weekend.)

Director David Gordon Green, who also helmed Your Highness, has by now distanced himself about as much as possible from the stylistic panache of his 2000 debut George Washington. It's not just that The Sitter employs racist, homophobic and xenophobic humor, it's that the film does it in such lazy fashion. One downside of being the last arrival in a year with around a dozen raunchy R-rated comedies is that the shock factor is no longer on your side; simply dropping a few choice words in front of children isn't enough to provoke a laugh from audiences who've seen far more twisted things in The Hangover Part II.

The film compensates for its comedy deficit by being overly saccharine. From the halfway point on, we're squarely in impassioned-speech territory, at which point Hill becomes, of all things, the killjoy. Ultimately, The Sitter is less Adventures in Babysitting and more Adventures in Therapy.

Screenwriters Brian Gatewood and Alessandro Tanaka, on their first credited feature-length film, are so eager to get to the character's redemption that they glaze over the bits we came to see: Jonah Hill behaving badly around minors. Isn't that just like a baby sitter to hurry us off to bed before we've even had our snack?