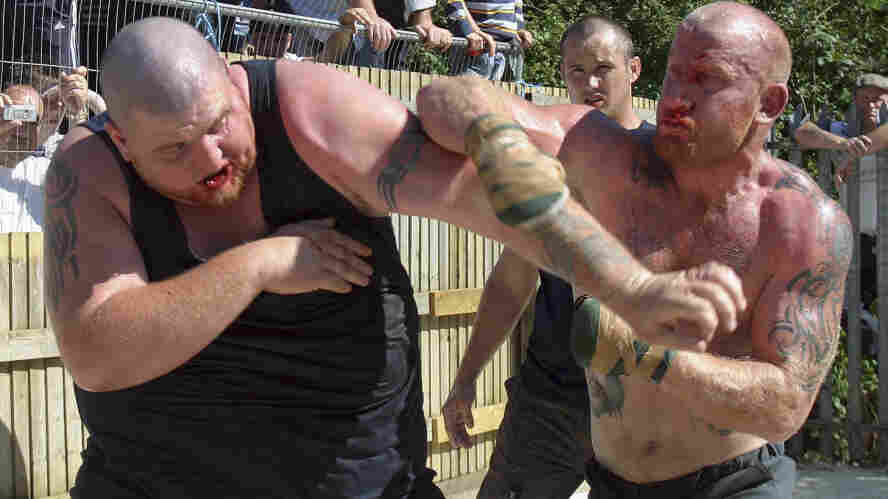 'What I Call A Fight'

The question of access troubles Knuckle, a ragged documentary that offers viewers a tour through the world of Irish Travellers, with special attention paid to the bare-knuckle fistfights fueled by ongoing disputes between rival clans.

On the one hand, footage of these chest-thumping amateurs throwing down on back roads and in improvised clearings is rarely available to outsiders; it's a rare look at the mechanics of a modern-day tribal blood feud.

On the other, the Travellers reveal themselves only so much to the filmmaker, closing ranks whenever the camera threatens to uncover deeper truths about shady dealings and fractious inner circles. After 12 years on their trail, director Ian Palmer must have felt like something akin to a journalist covering a political campaign.

Back in 1997, Palmer was hired to videotape the wedding of Michael Quinn McDonagh, and soon became aware of the decades-long conflict between the Quinn McDonaghs and their rivals, the Joyces. The feud started with a manslaughter charge in London and spread across England and Ireland like a runaway bar brawl.

Though the nomadic families of Traveller culture can be extraordinarily insular and inbred — there's always talk of cousins and uncles of not-so-distant relation on the other side — the Quinn McDonaghs, the Joyces, the Nevins and other clans rally behind their names, professing a burning hatred for those who fight under a different banner. They have everything in common, yet repel each other like positive ions.

The "Fair Fights" between the families often unfold over several hours and multiple match-ups, with five-figure cash stakes up for grabs — though the money seems secondary to the pursuit of honor and revenge. The fights are conducted without any built-in breaks and are mediated by two neutral referees, who try to limit kicks, head-butting, biting and any extended grappling. (Non-competing family members are forbidden to attend, for fear that the feud will spill out into the crowd.)

The charismatic leader of the Quinn McDonaghs is James, an undefeated fighter first seen pummeling the face of a Joyce brother who's too ungainly to counter yet too prideful to concede. James boasts that he never calls for fights himself — and makes clear his intent to retire — but we can see how those calls keep coming anyway. Between fights, the clans exchange vicious "taunt videos," often recorded in boozy pub celebrations after they've just traded blows. And so the cycle repeats itself, with James and his brothers throwing themselves — and, by extension, their wives and children — into the middle of it.

The fights themselves are an anthropological wonder, a raw clash between men whose pugilistic skills rarely measure up to their beet-faced braggadocio. In voiceover narration, Palmer confesses that he's been so seduced by this hidden subculture that he's lost sight of everything else — and the film he's made unfortunately supports that revelation. There's never a sense that Palmer is witnessing something James or the other Quinn McDonaghs don't want him to see, especially when it comes to the women, who are largely kept out of view. Though Palmer recognizes that he's being manipulated, he's often powerless to stop it.

Nevertheless, Knuckle smuggles in some troubling footage when it can, as when Palmer finally listens in on the women at a family function and finds a few dissenting voices — or when he shows young boys eagerly shadowboxing for the camera, ready to battle on well into the 21st century.

For all their brutality, the fights are so seductive and exciting that their consequences — the physical and mental toll exacted from the men and their families — sometimes fail to register.

Yet Knuckle largely skirts exploitation, simply by virtue of showing this conflict perpetuate itself over so many years. Clans like the Quinn McDonaghs and the Joyces seem destined to fight for generations after they've forgotten their rationale.