Accessibility links
The Tweets, Tics And Turns Of Twitter Politics Is public political discourse any different in the new age of social media? Survey says: Yes. Negative tweets about the GOP hopefuls outnumbered positive tweets by at least 2 to 1, according to a new report.

Texas Rep. Ron Paul has received more favorable treatment on Twitter than any other GOP presidential hopeful, according to a new study. DANIEL ACKER/Landov hide caption 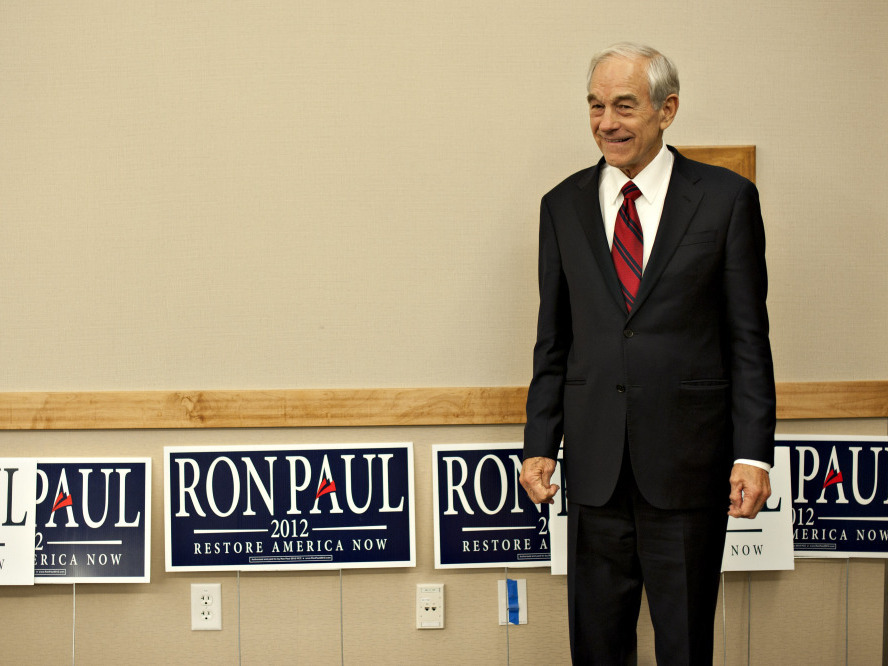 Texas Rep. Ron Paul has received more favorable treatment on Twitter than any other GOP presidential hopeful, according to a new study.

Political convo on Twitter is more opinionated, more negative. Diff from that in blogs or lamestream media, sez new study by Pew. Like duh!

But it will take more than 140 characters to really explore the results of "Twitter and the Campaign: How Social Media Users Have Treated the Presidential Candidates." The Pew Research Center's Project for Excellence in Journalism analyzed campaign coverage — more than 20 million tweets, online discourse and old-school news articles — between May 2 and Nov. 27. The report comes out Thursday.

"We are learning something new from this, something broader than we knew before," says the Project's director, Tom Rosenstiel. "For years, what the traditional media called 'public discourse' was actually fairly limited. It was really closer to official discourse. Today, because of these new platforms, we know a good deal more about public discourse. And it seems to vary depending on the technology. We use each form of social media differently."

So-called social media, Rosenstiel says, "is more complex and also less monolithic than is captured in the way we generally talk about it. Twitter is a different kind of discourse, when it comes to politics at least, than we see on blogs. And yet we find social-networking systems like Facebook as different in some other third way."

He says of social media avenues that "we tend to lump them all together in the language we use." But, he adds, "I am not sure we have the right language yet. For instance, we know from our weekly tracking of blogs that many bloggers write as activists who have made up their minds. We see something different, more open, more fluid, in the Twitter data and in the tweets themselves."

For most of the Republican candidates, the report revealed, Twitter has proved to be a rough arena. Negative-opinioned tweets — concerning nearly all the hopefuls — outnumbered positive tweets by at least 2 to 1. Negative evaluations of President Obama, meanwhile, outclocked positive evaluations 3 to 1.

The key, I think, is understanding these new forms of discourse. We need to know how they really operate, not how we guess or imagine they are. We shouldn't overpraise them as something they are not. We shouldn't oversimplify them or lump them together.

Of course, it's a challenge to present fair and balanced assessments of political candidates at any length, but Twitter's size limitations present special, well, limitations.

One Republican candidate, according to the report, has received better treatment on Twitter than anybody else: Ron Paul. "Fully 55 percent of the assertions about Paul on Twitter have been positive while only 15 percent have been negative — a 40-point differential," the Project explains in a press release. "While Paul trails significantly in the polls, and has received less coverage in news outlets than every Republican candidate except Rick Santorum, he is something of a social media phenomenon."

Ron Paul is also the candidate with the shortest, and therefore most easily tweeted, name. Coincidence?

Other highlights of the study:

• Pollsters found the overall stories of the candidates and their campaigns to be "harsher" on Twitter and in blogs than in traditional news coverage.

• Though Herman Cain — who recently suspended his campaign — received the most news coverage in the final seven weeks of the survey, the result did not prove favorable for him.

• The tone of Tweets surrounding several GOP candidates fluctuated over the course of the data-gathering. Mitt Romney, Rick Perry and Cain experienced their least favorable assessments as the survey wound down. And Newt Gingrich's Twitter profile improved later in the game.

• Though Gingrich reaped higher positive polling numbers in November, he experienced only "minimal improvement" in the tone of the coverage of him and his campaign.

Tweets don't always translate into support. Negative comments about President Obama outnumbered positive ones by 3 to 1. But more than half of the Twitter comments about Ron Paul were positive.

The Project refers to its survey — winnowed from news stories, editorials and a wide range of commentaries — as "research of tone," offering "a comprehensive, quantitative analysis of whether the messages Americans receive about a candidate in the news media are positive, negative or neutral."

These days all the media, old-school and new-school, "interact with each other constantly," Rosenstiel says. "One day, it may be a joke on a comedy show that goes viral and flows through social media. The next day it might be a video from a traditional newspaper editorial board interviewing Herman Cain. On the third day it might be a tweet from a celebrity. And depending on what you follow, the next tweet you see may be a professor at a panel at an Ivy League university."

So, as citizens in an evolving democracy, what can we learn from the survey — about our system and about how to improve it? "The key, I think, is understanding these new forms of discourse," says Rosenstiel. "We need to know how they really operate, not how we guess or imagine they are. We shouldn't overpraise them as something they are not. We shouldn't oversimplify them or lump them together."

And, he adds, "clearly the old media should not be threatened by them. The data make clear that if you are interested in public discourse and social transparency, these are powerful new opportunities."

That's four tweets' worth of answer, for those who are counting.