Accessibility links
Can Angela Merkel Fix Europe's Economic Crisis? As leader of Europe's most powerful economy, German Chancellor Angela Merkel is one of the most influential figures on the world stage. Supporters say she is trying to reshape Europe for the long term. But critics have derided her response to the debt crisis as too slow and unimaginative. 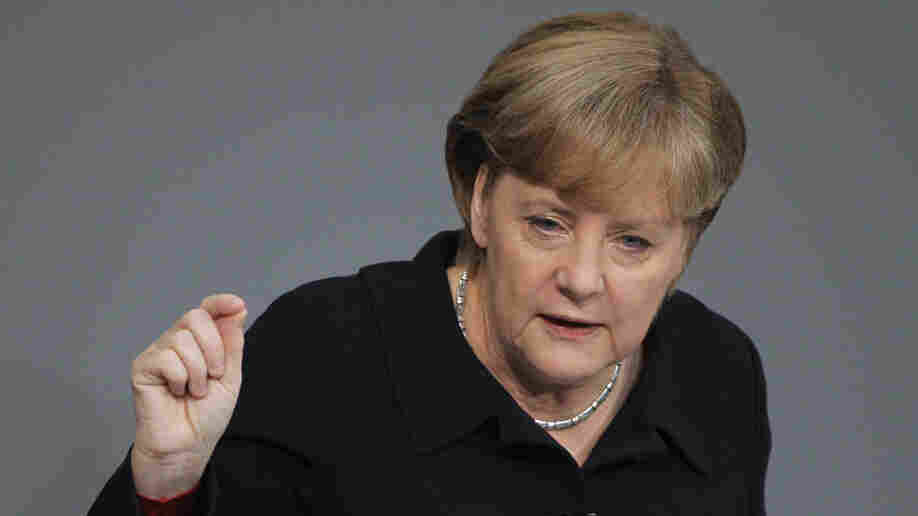 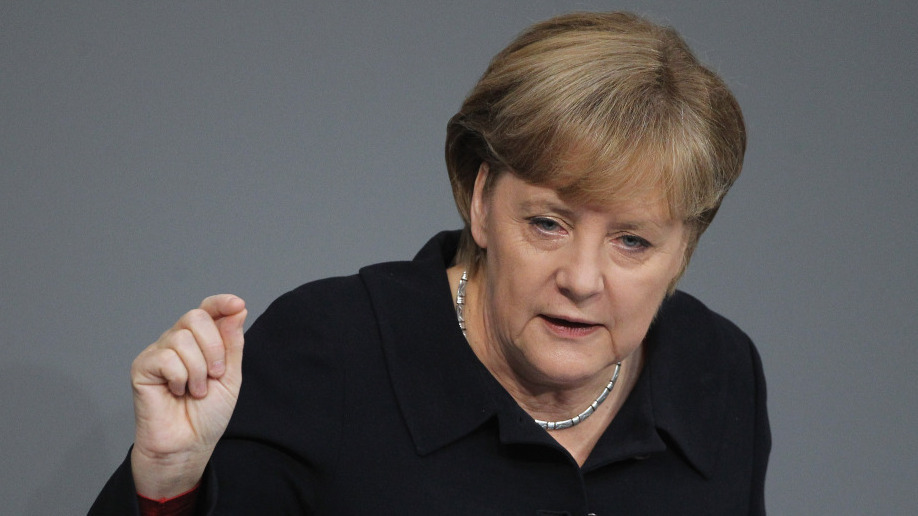 German Chancellor Angela Merkel says Europe's economic turmoil is the continent's greatest crisis since World War II. But critics say she has been doing too little and lacks a bold vision for solving Europe's problems.

European leaders gather in Brussels Thursday night for the start of their latest summit effort to save the eurozone from crushing debt that now threatens the global economy. All eyes will be on German Chancellor Angela Merkel, who is looking to build support for efforts to get nations to submit their economies to greater scrutiny and fiscal discipline.

Merkel's approach to the debt crisis currently roiling Europe has been calm, logical, methodical and — according to detractors, especially outside Germany, too slow and unimaginative.

Critics are seething that she insists on austerity as the main medicine for debt-ridden southern neighbors while she offers no new ideas for growth and fiercely resists efforts to let the European Central Bank intervene more. Merkel has also flatly rejected collectivizing eurozone debt through so-called "euro bonds."

She has called Europe's debt morass the continent's biggest crisis since World War II. But in a speech to the German Parliament recently, she likened the effort to find a lasting solution to "a marathon," not a quick sprint. "The government has constantly made it clear that the European debt crisis cannot be fixed overnight in one fell swoop. There isn't one simple solution," Merkel said.

As leader of Europe's strongest economy, Merkel is "the decider." She'll play a key role at the Brussels summit that some say will decide the fate of the euro. And the intensity of opinions about her underscores the fact that she is now one of the most powerful figures on the world stage.

So far, though, many would say Merkel has done very little tough decision-making.

"The German leadership has been jumping from crisis to crisis, and too little, too late. And her leadership, I think, has been very disappointing," says Gayle Allard, an economist at IE Business School in Madrid.

Even the Polish — who still harbor deep mistrust of their neighbor — are calling for more daring leadership from Berlin. In an astonishing comment for a senior Polish official, Foreign Minister Radoslaw Sikorski recently told a Berlin audience that the biggest security threat to his nation is "the collapse of the eurozone."

"I will probably be the first Polish foreign minister in history to say so," Sikorski said, "but here it is: I fear German power less than I am beginning to fear German inactivity. You have become Europe's indispensable nation."

Allard says Merkel should communicate to the German people how much their export-dependent economy has gained from the euro and how its banks are partly to blame for the crisis by aggressively lending to their southern neighbors. 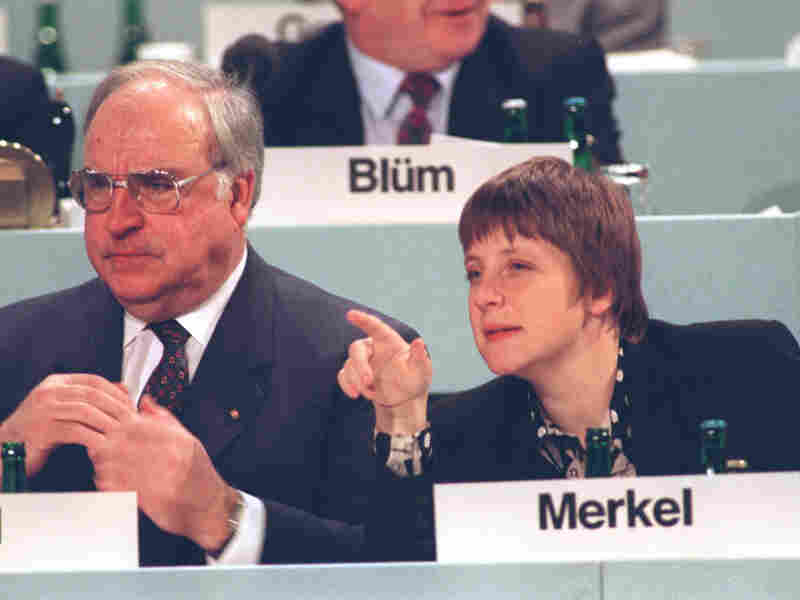 In an undated photo from the early 1990s, Merkel, then Germany's minister for women and youth, is shown beside Chancellor Helmut Kohl. Unlike Kohl, Merkel did not live through World War II and was not shaped by history in the same way as her predecessor. AP hide caption 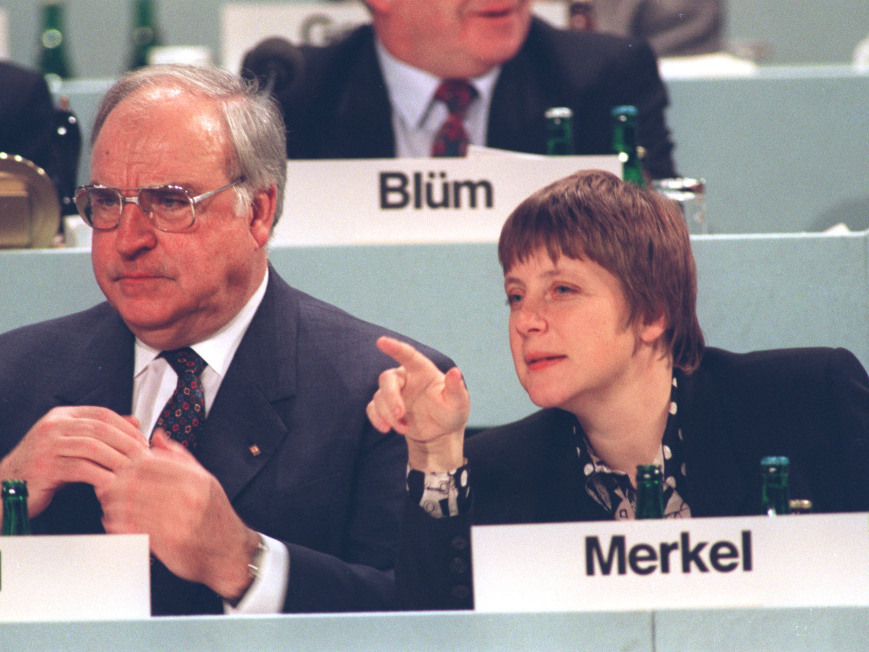 In an undated photo from the early 1990s, Merkel, then Germany's minister for women and youth, is shown beside Chancellor Helmut Kohl. Unlike Kohl, Merkel did not live through World War II and was not shaped by history in the same way as her predecessor.

"I think there is maybe fear — fear of telling the truth to German citizens that if the euro founders, it's going to hurt German industry badly. German industry has benefited enormously, and the slowdown right now in Germany is due to the crisis in their export markets on the periphery in Europe," she says.

But Elmar Brok, a member of the European Parliament and of Merkel's Christian Democratic Union, says the German chancellor is using the crisis as an opportunity to reshape European fiscal policy more in tune with German postwar sensibilities of frugality, caution and historical fear of inflation.

"She wants to have a long-term solution, not a cheap way [out]. And this is sometimes difficult in politics, which look for the next election date," Brok says.

Ferdinan Fichtner, a leading German economist, warns that there is a huge danger in prioritizing improving the European Union's fiscal structure that led the eurozone crisis.

"I fully agree with her this is necessary. But I think now is not the time to change the institutional setup," Fichtner says. "This is a risky game given that the crisis could change and turn into a major banking crisis within days."

Critics call Merkel's long-term approach dithering. And that cautious, methodical approach is rooted in her personality as well as her political and personal background.

Merkel is a bit of an anomaly as leader of the CDU, a party deeply influenced by Catholic social teachings with its core support traditionally in western Germany. By contrast, she is the daughter of a Protestant minister who grew up in the then-Communist east of the country and trained to be a physicist before entering politics.

Merkel biographer Gerd Langguth says her family had two cars and traveled relatively freely between East and West Germany, leading him to conclude that her pastor father had what he calls a "sympathetic relationship" with the Communist dictatorship. He says little in her orderly upbringing suggests she is capable of truly courageous leadership.

Langguth finds the popular image of Merkel as charismatically challenged and aloof unfair. She is a logical, unpretentious woman, he says, who still lives in the same apartment with her husband — a chemist who abhors media or public attention — that she did before becoming chancellor.

Yet Langguth says Merkel was not shaped by history the way her CDU predecessors Konrad Adenauer and Helmut Kohl were. As chancellor, notes Langguth, Kohl would sprinkle speeches with personal memories of hardship, of American aid in the rough years after the war. His late wife had been raped by the Red Army and thrown out a window as a preteen. Experience shaped Kohl's efforts to build a united Europe and strong trans-Atlantic relationship.

"Helmut Kohl was much more European by heart," says Langguth. "He knew what European unity means because he lived during World War II."

Despite Criticisms, Embraced By Most Germans

But for Merkel, Langguth says, the European project is much more a rational and matter-of-fact decision. She was born in 1954, nine years after the war, and learned about the conflict in school. It was an ideologically loaded communist curriculum, the biographer notes, which glorified so-called anti-fascist fighters, downplayed atrocities and sidestepped the full historical picture.

"It was not treated in the political and civic education in the same manner as in Western Germany. And of course, younger people do not feel personally responsible for World War II and for the Holocaust. So the experience never made [an impact on] Angela Merkel in her youth."

She is acutely aware of the European sensitivities toward a powerful, resurgent, economically dominant Germany, Langguth says, but adds that she may not appreciate it the same way as her predecessors did.

Merkel often says that "if the euro fails, so does Europe." But some wonder if she really feels the weight of history and her crucial role at this moment. As one biographer put it, in her years in power, Merkel has not made a single truly memorable speech.

Yet that may not matter: A majority of Germans embrace their even-keeled chancellor. Her personal approval rating today remains near 60 percent, and more than half of her fellow Germans say they trust her to guide Europe out of the crisis.