Accessibility links
Kremlin Cracks Down, Arrests Prominent Critic Russian lawyer and blogger Alexei Navalny is the darling of protesters and the bete noire of the Kremlin. His fight against economic corruption made him famous — as did his nickname for the allies of Vladimir Putin: "the party of crooks and thieves." And his arrest this week for protesting against alleged fraud in the recent parliamentary election is likely to raise his profile even higher. 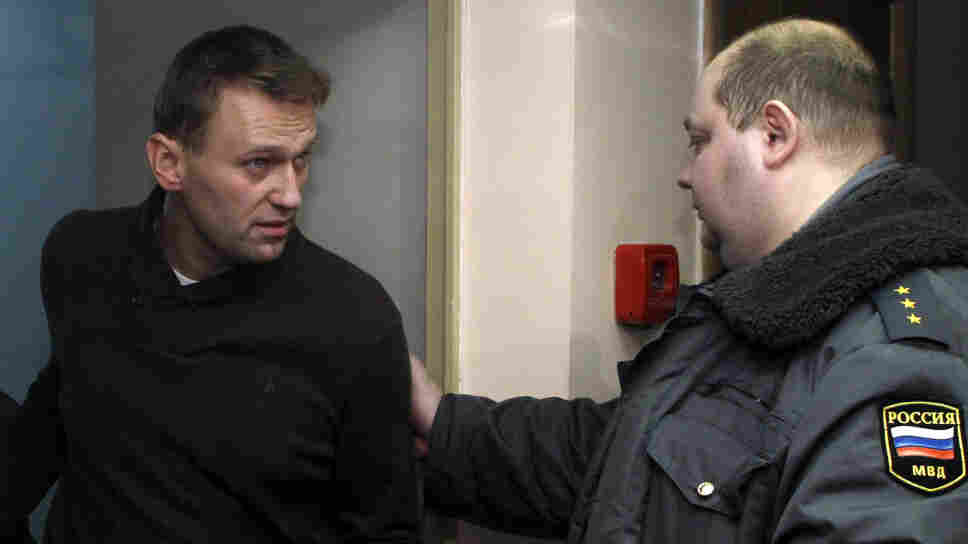 Lawyer and anti-corruption activist Alexei Navalny, left, is taken to court in Moscow on Tuesday. Navalny was detained Monday along with 300 protesters who rallied against what they called vote rigging during Sunday's parliamentary election. Mikhail Metzel/AP hide caption 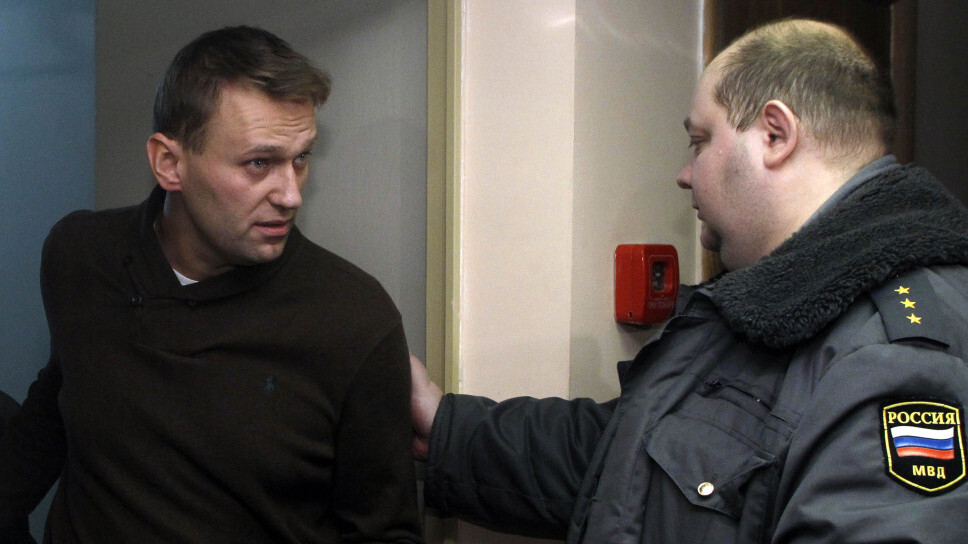 Lawyer and anti-corruption activist Alexei Navalny, left, is taken to court in Moscow on Tuesday. Navalny was detained Monday along with 300 protesters who rallied against what they called vote rigging during Sunday's parliamentary election.

Alexei Navalny knows how to work a crowd.

And after Sunday's parliamentary election, which many observers claimed were littered with violations, the demonstrators in Moscow were on his side.

"The party of crooks and thieves," the crowd responded, using the phrase that Navalny coined and that has caught on like wildfire.

United Russia won the election with about half the vote. But it was not nearly as well as the party has done in the past, and it has a growing number of critics.

The Kremlin is allowing some protest rallies, but police have rounded up hundreds of demonstrators. Among them is Navalny, 35, a prominent anti-corruption campaigner who was detained Monday and is now serving 15 days for disobeying police instructions.

Anton Nossik, an Internet entrepreneur and blogger who works with Navalny, explains why he has become so popular.

"The problem here is quite straightforward. There are crooks and thieves in the government who want to abuse the electoral system the way they abuse the economic system," Nossik says. 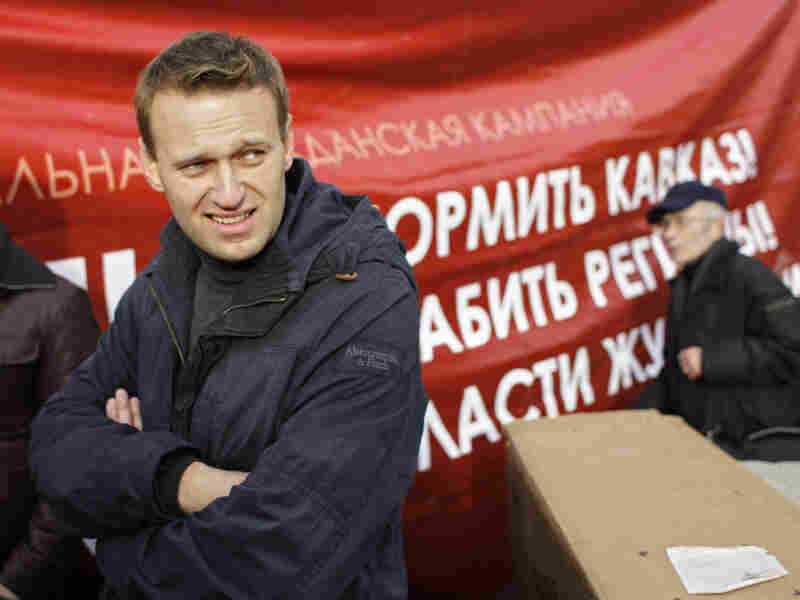 Navalny (shown here Nov. 4 during an authorized march on the outskirts of Moscow) first rose to prominence in 2007, when he took his protest against the state oil pipeline monopoly online. Sergey Ponomarev/AP hide caption

It's his fight against economic corruption that has made Navalny famous. The 35-year-old lawyer had long been politically active, but it was only once he started to take on the state oil pipeline monopoly in 2007 — and blogged about it — that his profile began to rise.

"Navalny owes all of his popularity to the Internet, because he was never allowed to appear on any television channel at least for the last four years when he was fighting corruption," Nossik says.

Bribery is a fact of daily life in Russia, and citizens now see people in power enjoying lavish lifestyles far beyond their official salaries.

Navalny's website claims to have saved the state millions of dollars by exposing dubious government tenders. And he has more than 100,000 followers on Twitter.

Since his detention, he's getting even more.

After Navalny's arrest, supporters followed Twitter rumors from jail to jail as they tried to find out where he was. Activists outside the jail in the middle of the night sent a live video feed from a mobile phone. Maria Legozhina saw it on the Web and rushed to join them.

Legozhina says she is studying government management and Navalny's fight against corruption speaks to her.

Navalny also strikes a chord with Anton Nikolayev, a left-wing artist and activist. He's part of the network of Twitter users who are mobilizing support for Navalny in jail.

"Common liberal people are looking to his blog, and they believe him, and he is the only man who can take all the hipsters to go on the street, and he is a very significant figure in this street politic now," Nikolayev said.

Yet the artist doesn't share all of Navalny's views.

Navalny has marched with anti-migrant nationalists whose slogan is "Russia for Russians."

Many people didn't seem to notice that side of Navalny, although he never kept it secret, said Dmitry Golubovsky, editor of Russian Esquire.

This month, Golubovsky made Navalny the first Russian on the cover since the magazine's launch in 2005.

"We were totally aware that he has these views, but what he does — not his words but his actions, the fight against corruption, and United Russia — that we find a very good thing to do, and that's what the vast majority of people who support him find the most important," the editor said.