Accessibility links
Black Atlantans Struggle To Stay In Middle Class There's no question that the Great Recession has meant hard times all around, but from 2007 to 2009, it sent black America into an economic tailspin. NPR's Robert Siegel travels to Atlanta to find out what those numbers mean in the lives of real people. 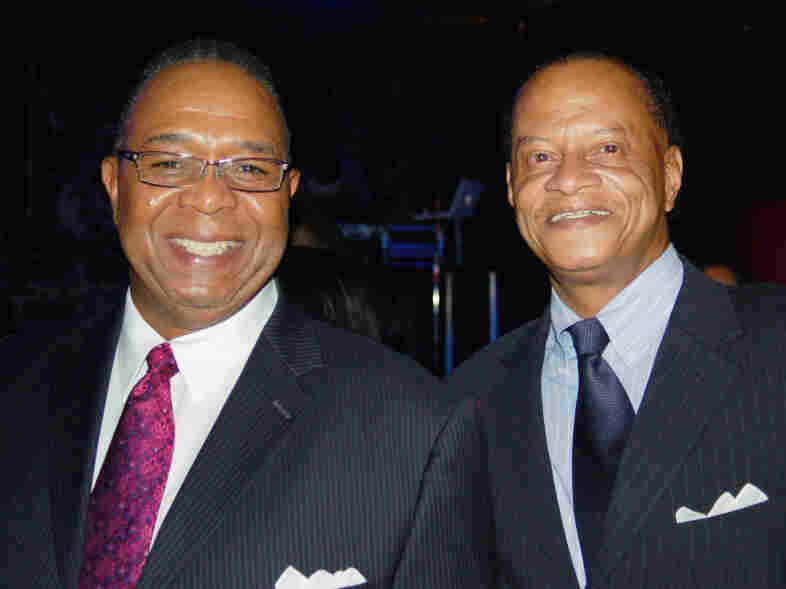 Foster Smith (left) and his best friend, Mark Ballard (right), met when they were 12 years old. After losing his job, and his ability to make rent, Smith moved into a room in Ballard's College Park, Ga., home. Courtesy of Foster Smith hide caption 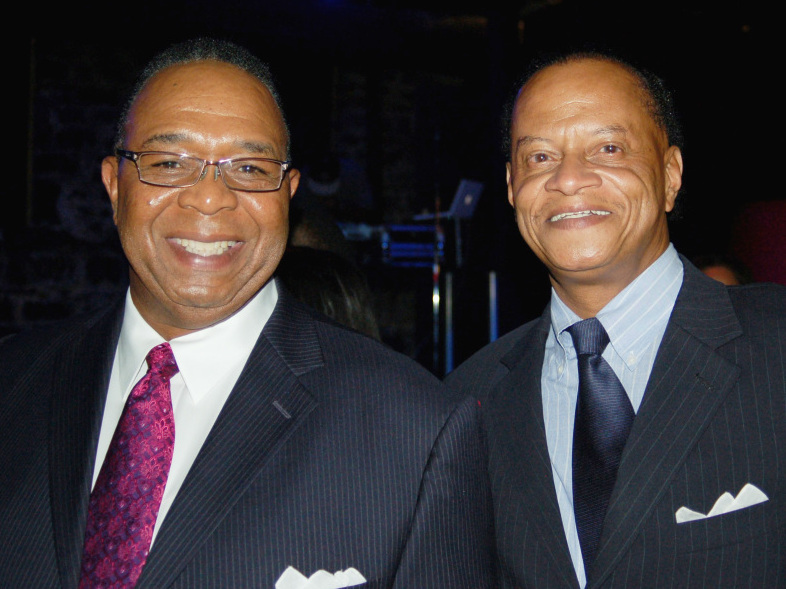 Foster Smith (left) and his best friend, Mark Ballard (right), met when they were 12 years old. After losing his job, and his ability to make rent, Smith moved into a room in Ballard's College Park, Ga., home.

There's no question that the Great Recession has meant hard times all around, but from 2007 to 2009, it sent black America into an economic tailspin.

According to the Pew Research Center, the median net worth — that's assets minus debts — of black households decreased by more than 50 percent from 2005 to 2009.

I traveled to Atlanta — a city that's virtually synonymous with the black middle class — to find out what those numbers mean in the lives of real people. I started in Fairburn, Ga., a cul-de-sac and two-car garage suburb just south of the city.

On one recent afternoon, half a dozen kids play football in the yard between two suburban houses. It's a seductive display of the American dream, and it explains how someone might buy a home with a loan they can't quite afford.

One of the kids running touchdowns on the lawn is 10-year-old Tyler Brittian. His parents, Teja and Eric, bought their Fairburn house for $155,000 six years ago. Three years later, their adjustable rate mortgage reset, and their monthly payment went up $200 to $1,400.

Then, the economy went south. Teja was a hairstylist, and business got so slow that she started losing money. Eric was an armed security guard for an IRS contractor. When his employer lost its contract, Eric lost his $40,000 a year job — now he works at Home Depot for about half that.

Like several of their neighbors, the Brittians fell behind on their mortgage and are currently facing foreclosure.

"We're not the only [ones]," Teja Brittian says. "If you actually go in the subdivision itself, there probably are a good five to eight [houses facing foreclosure]."

The Brittians got a reprieve from Bank of America after their senator, Saxby Chambliss, wrote to the bank on their behalf.

But what's at stake for them is not just a piece of property; it's the life they found for Tyler and his older sister.

"Their lives changed when we moved out here," Teja says.

Losing The Roof Over Your Head

The Center for Responsible Lending estimates that among recent borrowers, nearly 8 percent of both African-Americans and Latinos have lost their homes to foreclosure. (The rate for whites is 4.5 percent.) And losing a home is often a consequence of losing a job — as of Dec. 2, African-American unemployment is 15.5 percent, more than twice that of whites.

Nancy Flake Johnson, president of the Urban League of Greater Atlanta, says the bad economy has been devastating for all blacks, including college graduates.

Median Net Worth Of American Households

Many of those who have lost their homes do still have a roof over their heads, but the roof is often someone else's.

For 60-year-old Foster Smith, home is a room in his best friend Mark's house. It has a big closet where Smith can fit his entire tie collection — he has more than a hundred ties, accumulated over decades of working as a salesman — and he keeps his golf bag in the corner. They are symbols of the middle-class life he had obtained by selling jewelry for more than 20 years. He says he used to make $75,000 a year, but for the past six months he has had no work at all.

When Smith, who is divorced, could no longer pay the $1,100 rent on his old house, he moved in with his friend, who lives in a middle-class Atlanta suburb. And that location is important to Smith.

"It's a reminder of where you want to stay," he says. "I grew up in Montgomery, Ala., my mother was a single parent, and we lived in housing projects."

Smith recalls taking his son to visit Montgomery a few years ago and pointing out all the guys he had gone to high school and grade school with. When his son asked him why it mattered, Smith replied, "The point I'm trying to make here is they never left this place. This is what I came from, but this isn't where I want you to go."

Falling Back On Family

At 56, Okeema Garvin is living with her mother.

In 2004, she lost her job at Bell South, where she had worked for 20 years. In 2006, she went to work at a mortgage company, but lost that job two years later when the housing market collapsed. Garvin's husband retired on medical disability years ago, after a heart attack, so when she lost her last job, they walked away from the home they had owned for 20 years and moved in with Garvin's mother.

"This is the house that I grew up in, and I'm back in the bedroom that I left many years ago. I'm right back where I started from," Garvin says. "I never imagined that I would come back, not under these circumstances. But one thing I can say: I'm glad that I have a place to stay. I'm glad that she opened her door to us. Because otherwise, I don't know where we would have gone."

Garvin knows she isn't alone. She says that a couple of years back, the pastor at her church started asking anyone who is unemployed to stand up. At first, only one or two people stood up.

"Then as time went on, say maybe six months or a year later," Garvin says, "he would ask that question again, and you would see more people stand up. So it just became ... a regular thing."

'They've Got A Sniffle; We've Got Pneumonia'

Atlanta is a city where civil rights leaders are the namesakes of thoroughfares the way presidents and signers of the Declaration of Independence are in most other cities. There are boulevards named not just for Martin Luther King Jr. and former Atlanta Mayor Andrew Young, but also for civil rights leaders Joseph Lowery and Ralph David Abernathy. Last year, Raymond Street was renamed SNCC Way, after the Student Nonviolent Coordinating Committee.

But no place in Atlanta embodies the progression from the civil rights movement to political empowerment to economic development quite like the Hartsfield-Jackson Atlanta International Airport. The airport is named after the city's first African-American mayor, Maynard Jackson, who negotiated a unique deal for its construction.

More On The Black Middle Class:

"That airport was constructed with a mandate of having at least 25 percent of all of the subcontracting opportunities going to minorities and women," says Thomas "Danny" Boston, a Georgia Tech economist who studies minority businesses. "First time anything like that happened in the country."

It was a kind of New Deal for blacks in Atlanta, and it grew into many other deals, including mandated set-asides for African-American and other minority contractors and subcontractors.

But the deals also made minority business disproportionately dependent on public sector work. Now, the shrinking of the public sector is having a disastrous effect on many African-American business owners, including electrical subcontractor Melvin Griffin.

Griffin's business depended heavily on public contracts for things like installing stoplights with red-light cameras. Now he gets less work and, in turn, he gives less work.

"Employees are down quite a bit," he says. "Right now, I'm only working about three people. Couple guys, I just told them don't worry about calling me because I really got no work for them."

Compare that with five years ago, when Griffin says he had enough work to keep 25 employees busy. In a time of fewer contracts, bigger contractors are competing for jobs that used to look like small potatoes, making the competition for minority contractors like Griffin much tougher.

"I look at it like this," Griffin says of his big business competition. "They've got a sniffle; we've got pneumonia."

Combine all this with the loss of public sector jobs, where many blacks found security, and you get something worse than even a Great Recession.

But Geogia Tech economist Danny Boston says, despite all this, you don't hear a lot of public discourse about how bad things are for African-Americans in Atlanta. In a nationwide survey of small-business owners he conducted, African-Americans remained exceptionally optimistic.

"And that's even magnified when you come to Atlanta, because it's always operated on this sense of optimism, whether it was well-founded or not," Boston says. "I think that that keeps the discussion about how bad things really are from coming to the surface."

Foster Smith's lifelong friend bought the house they're now living in for a song — it had been foreclosed on.

Okeema Garvin briefly had a job collecting cable boxes from customers whose service was terminated.

And Melvin Griffin had done an electrical job for a local bank, rewiring a building it had unloaded in a bank sale — vandals had stripped the copper wire from the building while it sat vacant.

There is no denying that these are still hard times.

A previous Web version of this story incorrectly said that the Brittians' mortgage payment had increased from $200 to $1,400. The $200 figure is actually the amount of the increase, not the previous payment.