Accessibility links
EPA Connects 'Fracking' To Water Contamination For the first time, a government study has tied contamination in drinking water to an advanced drilling technique commonly known as "fracking." EPA scientists found high levels of chemicals used in hydraulic fracturing in the ground water of a small Wyoming town. 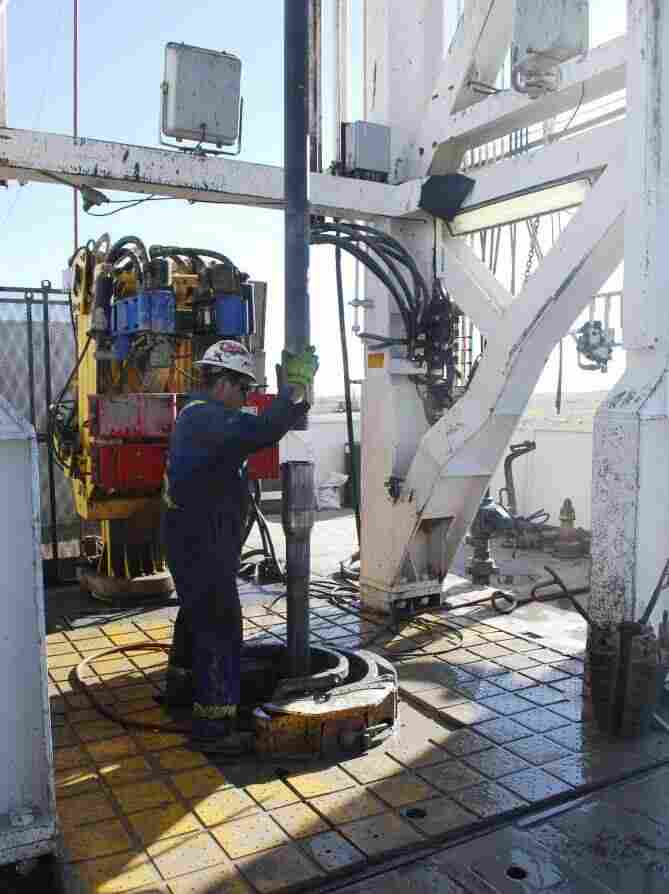 A worker at Encana's Frenchie Draw gas-drilling rig in central Wyoming guides sections of steel pipe into an 11,000-foot well in 2009. The EPA on Thursday has tied contamination in drinking water to chemicals used in the drilling technique, called hydraulic fracturing, or "fracking." Jon Hurdle/Reuters /Landov hide caption 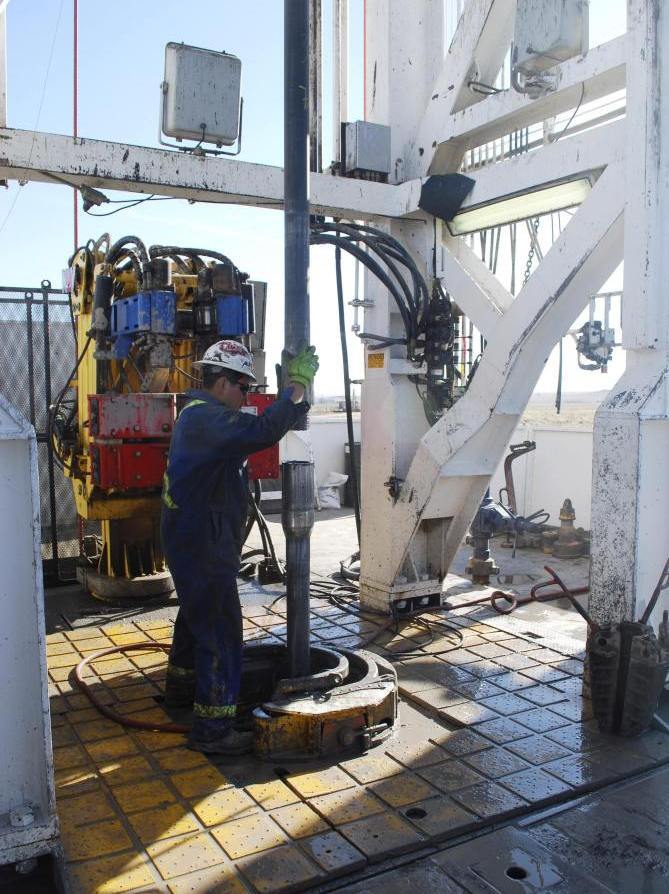 A worker at Encana's Frenchie Draw gas-drilling rig in central Wyoming guides sections of steel pipe into an 11,000-foot well in 2009. The EPA on Thursday has tied contamination in drinking water to chemicals used in the drilling technique, called hydraulic fracturing, or "fracking."

For the first time, a government study has tied contamination in drinking water to an advanced drilling technique commonly known as "fracking."

The gas industry and other experts have long contended that fracking doesn't contaminate drinking water. The EPA's findings provide the first official confirmation to the contrary.

Fracking has helped spawn a gas boom across the country, which President Obama supports as a key to the country's energy security. But many experts have raised concerns about a wide range of environmental risks.

In many areas across the country, people who live near gas production have complained that their wells have been contaminated.

People in Pavillion, located on the Wind River Indian Reservation, contacted the EPA three years ago, complaining that their water smelled and tasted bad.

The agency started sampling drinking water wells in 2009 and found low levels of methane and other hydrocarbons in most of those wells. Although the levels did not exceed drinking water standards in most cases, the agency recommended that people get other sources of water for drinking and cooking, Encana, the company which drilled the wells, started providing water. The company says it provides drinking water to 21 households at a cost of about $1,500 per month.

The agency was concerned that higher concentrations of some of the chemicals might be lurking elsewhere in the aquifer.

So EPA researchers drilled two wells and found lots of chemicals, which could be tied to drilling. For example, they found levels of benzene, which is known to cause cancer and other health effects, far higher than safe drinking water standards. The presence of other chemicals — like synthetic glycols and alcohols — persuaded them that the contamination was likely coming from fracking.

"Alternative explanations were carefully considered to explain individual sets of data. However, when considered together with other lines of evidence, the data indicates likely impact to ground water that can be explained by hydraulic fracturing," the EPA reports says.

The EPA has yet to find those synthetic chemicals or benzene in private or public drinking wells. However, an EPA scientist said that the agency doesn't know how contaminants might move in the aquifer, so it's concerned about what will happen to the drinking water wells over time.

A spokesman for Encana called the EPA study "speculation."

As for the benzene, methane and other hydrocarbons, Encana spokesman Doug Hock said: "We didn't put those compounds there, nature did."

He contends that the agency's wells were drilled in the wrong spots, into a gas-rich area instead of water. Hock also says it's possible that the EPA might have created the contamination when drilling.

The EPA says it carefully monitored its own drilling to ensure it was not responsible for any of the contamination.

Nonetheless, the EPA agrees with the company and state officials that further investigation is warranted.

The EPA's study will be scrutinized by other scientists for 30 days and the agency will accept public comment for 45 days.

EPA stresses that the geology under Pavillion is very different than in other natural gas formations across the country. So the results of the Pavillion study do not necessarily apply to other areas. The hydraulic fracturing near Pavillion happened much closer to the surface and to drinking water sources than in many other areas.

Still, the EPA is investigating what risks hydraulic fracturing might pose in other regions. The agency recently launched a nationwide study of fracking's potential impact on drinking water.