Accessibility links
When Airlines Depart Cities, Businesses May Follow Chiquita recently announced it will move its headquarters from Cincinnati to Charlotte, N.C., in part because of better air service there. After Delta filed for bankruptcy, its Cincinnati hub dropped from over 670 daily flights to just 200. Like many cities, it's trying to draw back some of that traffic. 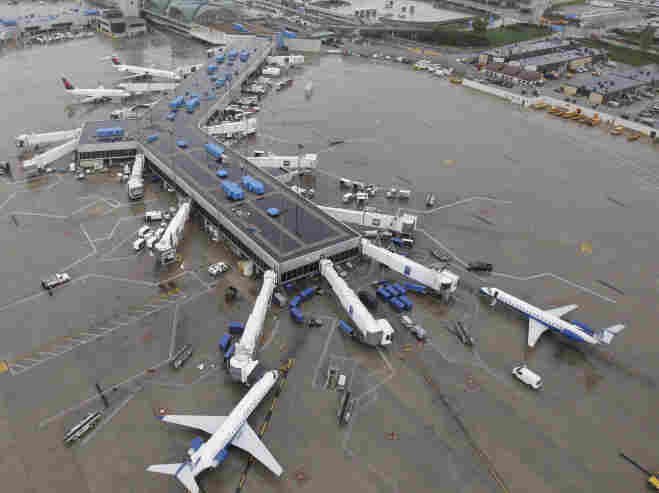 Lambert-St. Louis International Airport lost American Airlines as a hub in 2003; the airport's daily flights dropped from nearly 600 in 2001 to 250 today. Like other cities it's looking for a way to boost traffic, and officials are planning to make it a cargo hub. Jeff Roberson/AP hide caption

Last month when Chiquita announced it was moving its corporate headquarters from Ohio to North Carolina, it said it was lured there in part by the number of flights in and out of the Charlotte Douglas International Airport.

Cincinnati came out on the losing end of the deal because like so many other cities, it faces a shrinking airline hub, which can affect the city's business climate.

The Cincinnati/Northern Kentucky International Airport, or CVG, is big but kind of empty. Business traveler John Bonno from Atlanta was noticing recently how desolate it feels.

"I remember coming here a few years ago and it was a hub of activity, you know, with all three concourses," he says. "Now there's only ... one concourse left, if that, and it's just really amazing to see this huge infrastructure supporting very little flights."

In 2005, Delta offered nearly all of the 673 daily flights out of Cincinnati, including direct service to Amsterdam, Frankfurt, London, Rome and Paris. But after a bankruptcy filing and a merger with Northwest, it now has only 170 daily flights and only one direct international destination: Paris.

A new task force has hired a consultant, and big Cincinnati companies like Procter & Gamble, GE Aviation and Macy's are lobbying for which airlines and routes they'd like to have.

Aviation writer Jim Ott says Cincinnati certainly isn't alone with these kinds of challenges. Increasingly, medium-size cities and their taxpayers are going to have to subsidize airlines to get better service,

"With the mergers and the bankruptcies that occurred in the airline business, Pittsburgh lost out when US Airways really de-hubbed Pittsburgh. The same thing happened with the American Airlines de-hubbing in St. Louis," Ott says.

But he says Pittsburgh has turned the situation around, bringing in three low-cost carriers to supplement the legacy airlines and getting Delta to add a direct flight to Paris. Allegheny County Airport Authority CEO Brad Penrod says it wasn't easy.

Penrod says no more corporate payments were necessary and the flight to Paris is now paying for itself.

In St. Louis, airport officials and others have a plan to become a cargo hub. They were targeting trade with China, but the Missouri Legislature failed to approve millions in tax incentives. The director of Lambert Airport has indicated the group will pursue other regions, like South America. Meanwhile, aviation analysts say the airlines will follow the money and it will take a sufficient amount to add the flights cities crave.

Van der Horst with the Cincinnati chamber says she doesn't expect Delta to go back to 673 flights a day at CVG, but she knows that for Cincinnati to attract and retain more business, it will mean landing more flights.